Pretend you are hosting a dinner for Nobel Prize winners. In order for the event to go smoothly, you need a fitting dinner companion to sit beside world experts in literature, science, religion, history, poetry, technology, architecture, music, politics and other realms of knowledge.

The problem is that you have only one Michael Underwood and don’t know how to go about cloning him.

Tallahassee attorney R. Michael Underwood is a polymath, a Renaissance man, who is equipped to discuss with equal aplomb Islamic architecture, the poetry of Auden, the Periodic Table or the Peloponnesian War.

Underwood, who established his own practice after working at the State Controller’s Office for much of his career, said in Wordsworthian fashion that he loves “toiling in the garden of the mind.” But there is nothing snooty or affected about him. Rather, Underwood is perennially like the bright child
just off the elementary school bus who is filled with the excitement of having learned frogs can jump 6 feet or that the world has 200 different ways of saying “ice cream.”

Toiling in the garden of the mind is, for him, a form of play.

Born in Michigan to a father who ran a garbage-collecting service and a mother who was a “repository of knowledge,” he majored in philosophy before going on to law school. But Underwood never stopped learning.

What makes him most unusual is the breadth of his interests and the depths to which he explores them. He thrives on knowledge.

This concept of the “gentleman scholar” is not new. Around the time of the Enlightenment (1685–1815), religion ceased to be the governing force in people’s lives. Science and access to scholarly works left the confines of universities and devolved to “societies” where like-minded individuals would gather to share information, discuss new findings, even conduct their own experiments. 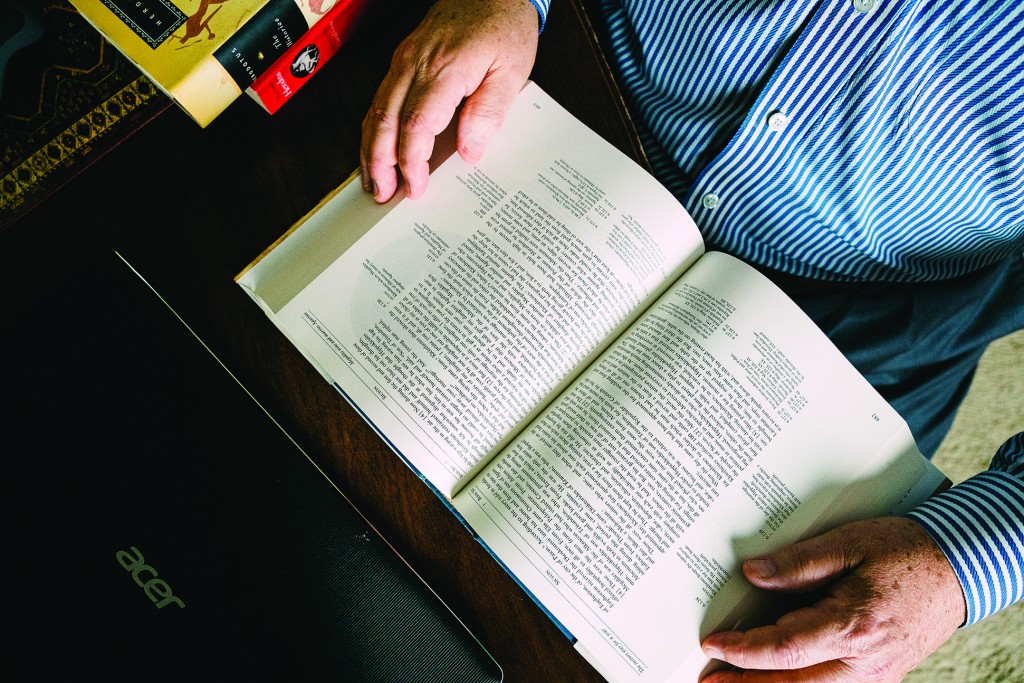 Not content to own but a single copy of Herodotus’ Histories, Michael Underwood has several and has one with him at all times. He is learning Greek so as to be able to read classic works in the original. The Bible is his favorite book — when read in the Latin text. He is fascinated by transitional periods in history even as, today, the world seems to be in a constant state of change. Photo by Saige Roberts

A few women, but mostly men, traveled, spent vast sums on books and saw themselves as “homo universalis,” enlightened people who were interested in most everything. Underwood does not dub himself that, but his mental delights stretch in all directions.

“I love math. I adore astronomy. Physics is incredible,” Underwood said. He quotes astrophysicist Adam Frank in casual conversation. Paul Dirac, a discoverer of anti-matter, is a hero. He, and physicist and radar pioneer Hans Plendl spent evenings together with Russian scientists at Plendl’s home. And don’t get Underwood started on the Higgs boson particle. He’s pulled all-nighters attending seminars on the Atlas experiment at Cern, Switzerland’s Hadron collider.

Underwood keeps a copy of Herodotus’ Histories with him at all times. He is beginning to learn Greek in order to read it in the original. He is fascinated by the Peloponnesian War; pours over The Mediterranean by Fernand Braudel; and has plans to visit the Holy Land.

Underwood said he struggled at guitar, piano and violin, but he did become a music producer and a manager of three rock bands years ago.

“For me, the Bible is my favorite book when read in the Latin text,” Underwood said. Though devoted to science, he said that “an overly rational approach seems misguided. I prefer Moses parting the sea as envisioned by Cecil B. DeMille to an explanation based on the wind.” He loves Poe, Beckett, Borges, Tolkien and Homer, whose poem, The Illiad, he has read over a dozen times.

“My favorite time period is Periclean Athens in the 5th century B.C., but I am fascinated with all periods of transition — between the archaic and the classical in Greek art, between Renaissance art and mannerism. The Psalms and Shakespeare were both written during times of transition.

“The Pantheon is my favorite building,” Underwood continued. “My favorite historical event is the American Revolution. The worst was the burning of the Great Library of Alexandria. Oh, and whatever my wife Zilpha cooks is definitely my favorite food.”