In December 2020, young mom and budding confectionary entrepreneur Courtney Whalen stepped into The Prepared Table with a macaron in each hand. Both were banana pudding flavored, the favorite dessert of Robin O’Donnell’s husband.

O’Donnell, owner of the cozy kitchen boutique at Bannerman Crossings, told herself she would eat one and save the other for her Michael.

She couldn’t hold out.

By the time her husband arrived home from work that evening, his cookie was toast. O’Donnell gave Whalen a call.

In the course of their conversation, O’Donnell proposed that Whalen no longer peddle her sweets out of the back of her car, proposing that she instead sell them at The Prepared Table.

More particularly, O’Donnell offered her shop as the new, permanent location for Whalen’s biweekly pop-up shop, a decision that proved beneficial for both women.

“The day of her first pop-up, I got to the shop around 9:45 before we opened at 10, and there was already a line waiting at the door,” O’Donnell said. “One time a lady got in line, and she didn’t even know what she was in line for. She said she figured if this many people were waiting on something, she didn’t want to miss it.” 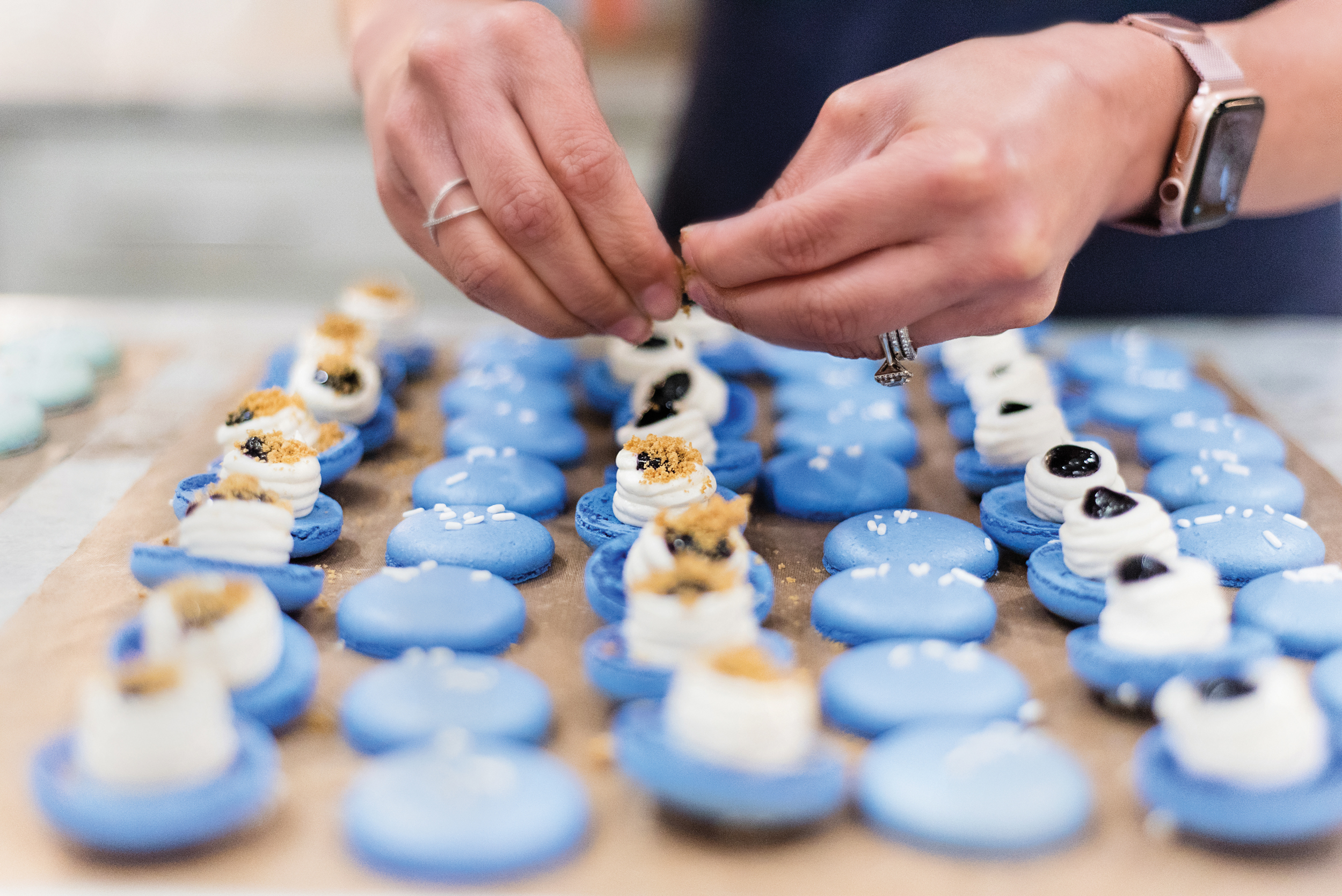 SOME ASSEMBLY REQUIRED
Macaron-maker Courtney Whalen has arrived at some 80 flavor combinations for her hot-selling cookies. Varieties include Blueberry Cheesecake. Photo by Kay Meyer

“It’s really more like 80 now,” Whalen laughed. “I’m always experimenting. I like to joke that I should write a cookbook just on my fillings because there are so many.”

Whalen launched Live Love Macaron back in 2017, but the path to becoming a business owner was by no means a straight line. Her youngest child, Charlotte, had just turned 2. Like many stay-at-home moms, Whalen grew restless. Her time belonged to her children, but she longed for something of her own.

“I started tinkering around in the kitchen during nap times, and macarons caught my eye,” Whalen said. “It was a challenge that I really wanted to conquer and succeed at. I would post pictures on Facebook and bring them to family events, and people started asking me to make them for birthday parties, dinner parties or gifts. It gave me the boost of confidence that I needed.”

Macarons are a tricky treat to master. Among the Italians, the French and the Swiss, there are at least three methods for achieving the optimal crisp-yet-gooey sandwich cookie, but each combines the same basic ingredients: egg whites, sugar and almond flour.

Whalen started with the French method, whipping meringue after meringue until her results were just right. Then, with the encouragement of a fellow macaron-making Facebook friend, Whalen branched into the Italian method, carefully handling vats of boiling sugar water with a Betty Crocker/Breaking Bad flare.

“Trying the Italian method made me fall in love with macarons all over again,” Whalen said. 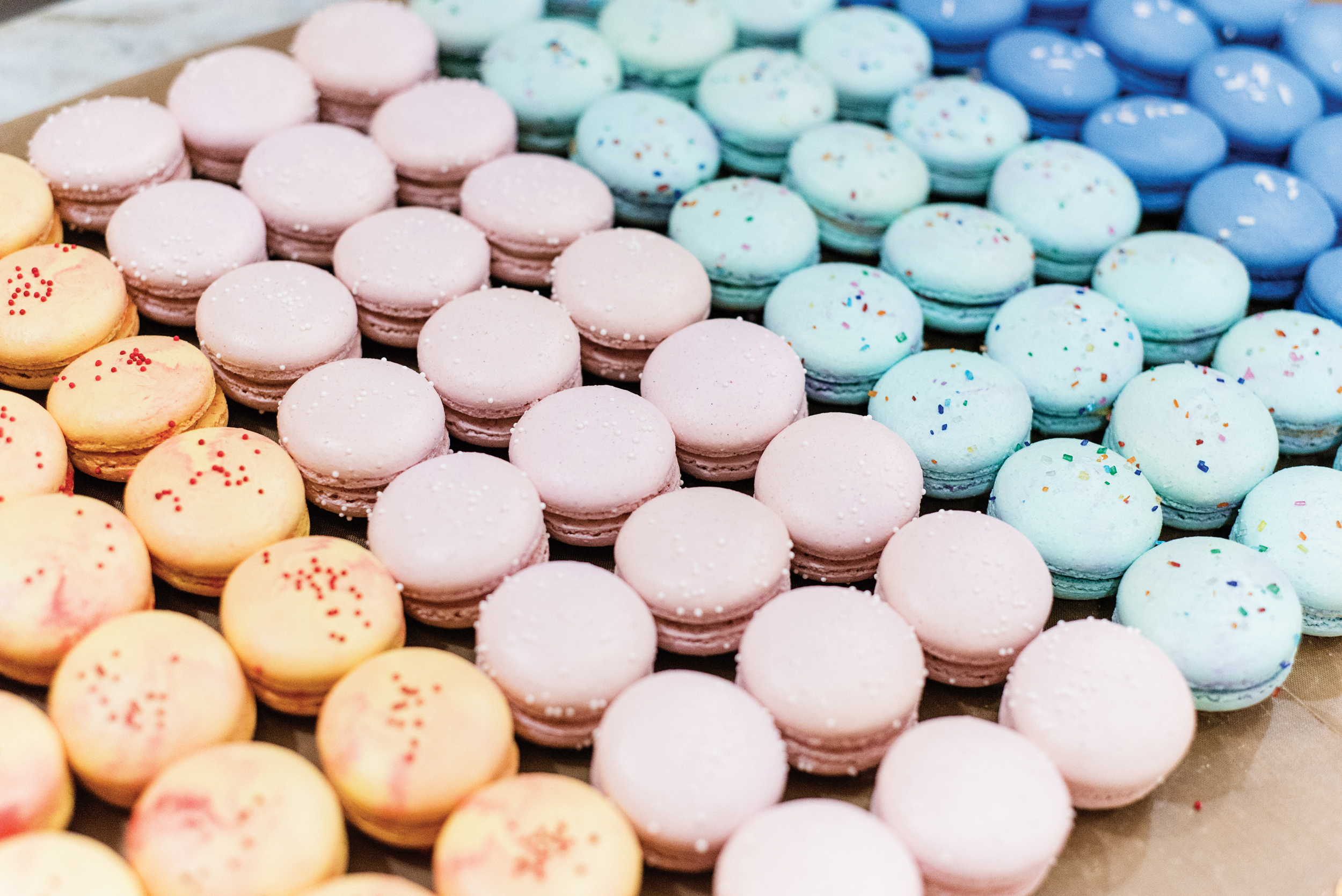 When Robin O’Donnell, the owner of a boutique kitchen business at Bannerman Crossings, offered Courtney Whalen space for a weekly pop-up shop, Whalen was on her way to making macarons in large quantities. Photo by Kay Meyer

Within a year of baking her first batch, Whalen applied for an LLC and started taking on larger orders, and the word got out. Every other week, she would pack up whatever cookies went unsold and alert her hungry followers of an impending flash sale with the note: “Pickup — Trader Joe’s.”

A petite woman with a chipper voice and a wide grin, Whalen said she felt like a drug dealer, passing off little parcels to customers with a sweets addiction.

“But that’s where the business truly began,” Whalen said. “The flash sales were anticipated. They were super fun and engaging. People were surprised by the flavors and would comment about their favorite flavors. It was really fun, but it was also really time consuming.”

“If I could give advice to any young woman out there with a passion that they believe in, it would be this: You never know if you don’t try,” Whalen said. “Put yourself out there. Put your idea out there, and it will reach someone somewhere. You have to pursue your dream and be ready to evolve and get creative and get gritty. If you love it, go for it.”

Place an order at LiveLoveMacaron.com, and discover the date and time for Courtney Whalen’s next pop-up shop.