My maternal grandfather, Darrell King, is 100 years old. Up until a year ago, he would work in the garden for hours. He drove until he was 98. He and my grandmother, Pauline, traveled the world when he was well into his 90s. He always took care of himself, ate healthy and stayed active. He’s slowed down some, but he is happy. He still reads the paper every day. He follows his favorite sports. His health is generally good – and has been for a full century.

In contrast, my paternal grandfather, George Sanders, struggled to get around toward the end of his life. He chain-smoked Lucky Strikes for decades, ate Southern-fried food and never exercised. He died of a heart attack and cancer at the age of 58. The last years of his life were filled with health complications and inactivity.

Did choices that each of them made when they were younger affect their quality of life in their later years? 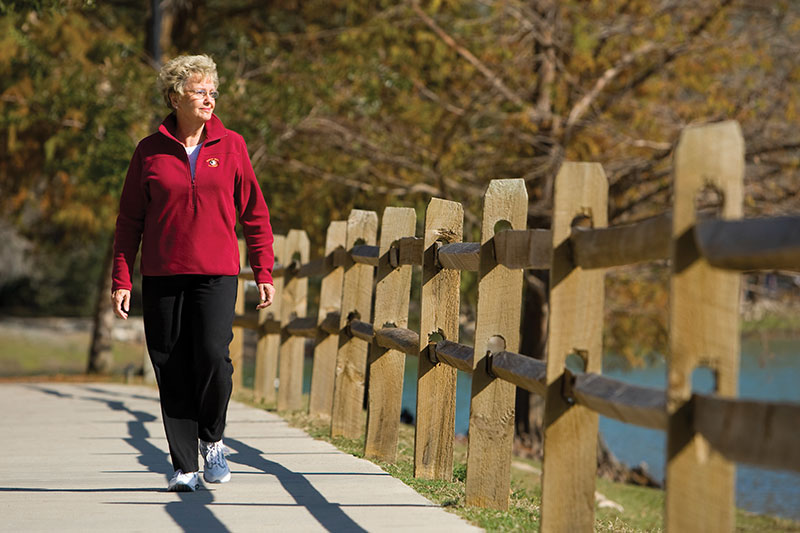 Exercise is just one component of a lifestyle practiced by grandmother Sue McAnally, which she hopes will give her continued good health in her later years.

That’s a question many doctors answer with an emphatic “Yes!”

“The decisions we make, our daily routine, habits, food choices, level of activity, amount of rest and stress management are some of the factors which influence quality of life and can obviously affect health positively and negatively,” said Tallahassee family physician and geriatrician Dr. Mervin Wallace.

Making healthy choices can add months, even years, to our lives. But the fact is, we all die sometime of something. The question then becomes: What is the quality of our life going to be in the decade or two preceding our inevitable demise?

If you knew that the lifestyle choices you made throughout your life could help to avoid years on oxygen, being bedridden or living as an amputee, would you change your habits?

Tallahassee resident Sue McAnally is a busy grandparent. The 69-year-old has made choices over the years to watch what she eats, exercise and enjoy life. She said she feels as healthy as ever and would advise others to take care of themselves.

“I have a good healthy quality of life due to many factors, including lifestyle, eating habits, exercise, etc.,” McAnally said. “Annual medical check-ups are the singular most important factor in experiencing a good quality of life. In other words, find out what it is before it happens! I have never smoked, I attempt to not overeat, and I plan nutritious meals. I believe that stress is in many instances a self-imposed condition and is easily corrected by remaining calm under fire, not losing your temper, relaxation, reading a good book and sufficient sleep.”

That positive thought process is the key to a good quality of life, said aging expert Dick Ambrosius. He is vice president of communications, coaching and culture for PRAXEIS, the developer of several university-based retirement communities, including the planned Westcott Lakes in Tallahassee.

“If you are not in good health, you do not feel like doing much and limit your capabilities,” Ambrosius said. “You do not have to become a marathon runner or have six-pack abs. A healthy diet and exercise program will generally improve anyone’s quality of life over time. Regardless, a positive attitude and aging self-image are critical to getting the most from life’s second half.”

Wallace’s viewpoint is similar: “Good health portends a positive outlook on life,” he said. “It is easier to ‘get up and go’ when you are healthy. Day-to-day plans and future plans are partially dependent on one’s health status. For those with children, healthy living advice and healthy habits are easier to pass on if one is healthy himself and can actively demonstrate. You can be a good example.”

But what if unhealthy habits were a part of the world you lived in? Years ago, Americans were smoking cigarettes and drinking highballs in offices, drinking sugar-laden Kool-Aid with every meal, and slathering themselves with baby oil to get a suntan.

Sixty-year-old Tallahassee resident Teresa Hanna reflects on her past: “When I was growing up, cigarettes were passed out at the Christmas parade and on airplanes,” she said. “It was accepted and wasn’t viewed as a bad thing.” She said there never was talk about low-carb diets or fat-free foods.

“We had mashed potatoes, meat and whole milk; eggs and bacon for breakfast,” Hanna said of her growing-up years. But she also points out that, as children, they were very active. “We never sat around watching TV, even if you had one. Nor did we play indoor games. We were always running, riding bikes, jumping rope and playing outside.”

Hanna said she has no regrets about her lifestyle choices. “Only God knows your plan,” she said. “We just have to do the best we can with today’s knowledge and hope we have made good choices. You certainly shouldn’t feel guilty if something happens, and you think you made the wrong choice. I feel this is our stress today. We have far too much information.”

As a whole, we are able to better treat, medicate and prevent diseases than in years past. But on the other hand, obesity statistics for older Americans are alarming. Johns Hopkins University research classifies more than two-thirds of the adults in this country as overweight or obese. And according to U.S. News and World Report,
more than 40 percent of women and 30 percent of men over 70 years old said they never exercise.

Ambrosius said that despite these alarming statistics, we as a society can get a handle on our health.

“The good news is that both obesity and apathy are correctable conditions,” he said. “Perhaps our biggest problem is that we seem to have become a nation of victims. People get sick from smoking and still blame the tobacco companies; super-size their McDonald’s order and blame Ronald because they are overweight. Even in the area of health care, we do not focus enough on prevention and provide incentives for people to change their behavior, (such as) reducing health-care premiums for those that change behaviors. For older adults, we have replaced purpose with pills, wisdom with disrespect, and proactive problem solving with complacency.”

Wallace says it also is important to note that “quality of life” doesn’t have to mean “perfect health.”

Comedian George Burns smoked 10 to 15 cigars a day and loved to drink scotch. His last years were active and fulfilling until he died at the age of 100. Perhaps you know someone personally who didn’t stick to a strict, healthy regimen and lived a very long, happy life.

“Healthy living is multi-factorial and only partly under our control,” Wallace said. “However, we can make choices that prevent and/or postpone certain illnesses. Many of these illnesses are chronic and lead to prolonged morbidity, rather than an immediate death. Years of ill health decrease productivity and quality of life and lead to frequent hospitalizations, multiple medications, financial distress, isolation and clinical depression, among other adverse consequences.”Ambrosius sums up the situation: “Too many people just accept poor health as a natural part of getting older, which is definitely not the case. While you will not get out of this world alive, age does not kill people.”