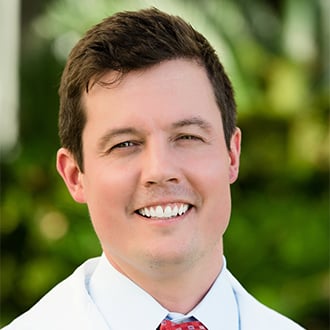 Dr. Narlin Beaty joined the Tallahassee Neurological Clinic after completing his postgraduate training at both the University of Maryland and the Johns Hopkins Hospitals. He is a board-eligible neurosurgeon and is licensed in the State of Florida, Maryland, and Wisconsin.

He attended college at Emory University in Atlanta, Georgia. He graduated with a Bachelor of Science in Chemistry and Biochemistry and was awarded Cum Laude for his honors thesis and research on DNA polymerization. From his work in the laboratory, he was granted a Howard Hughes Teacher/Scholar Award. This prestigious award funded a dedicated year of research in the chemistry lab and allowed Dr. Beaty to further examine DNA’s complex relationship with cell membranes. Following his successes at Emory, he returned to his hometown of Baltimore, Maryland, where he continued his studies at the University of Maryland Medical School. During medical school, he was awarded the William Mosburg Neurosurgical Award and as well as a service distinction for his work with the underprivileged population of Baltimore and community outreach.

Following medical school, Dr. Beaty was offered a position at the University of Maryland and R. Adams Crawley Shock Trauma Center in Neurosurgery. During his training, he spent dedicated time training in Trauma Neurosurgery, Spine Neurosurgery, and Cerebrovascular Neurosurgery. He spent a year at the R. Adams Crawley Shock Trauma Center studying and caring for patients with severe traumatic brain injury and complex traumatic spine fractures. In addition, he spent a dedicated year with the University of Maryland endovascular radiology team treating cerebrovascular disease. Dr. Beaty spent 18 months working as the chief resident of the residency program. During his residency, he continued his pursuit of research and for his efforts, he was awarded the Robert Dempsey Cerebrovascular Research Award, a national award given to honor the best neurosurgical research done by a resident physician in the United States.