It Takes Work to Make the ‘Big Iron’ Sing

Toward the end of the Spanish Mission period in the early 1700s, Castillo de San Luis (the palisaded blockhouse at Mission San Luis) boasted impressive artillery for a frontier Spanish village. Because San Luis was the western capital of La Florida, it had to have strong protection, including several four- and six-pound cannons. Today, volunteers and staff use a replica six-pounder to demonstrate how Spanish soldiers handled these powerful weapons. Crew members today are required to take a black powder safety class and pass a written test before joining the team. This is followed by drill, drill and more drill. Here is a quick look at the loading and firing process, conducted in Spanish by a six-member squad. 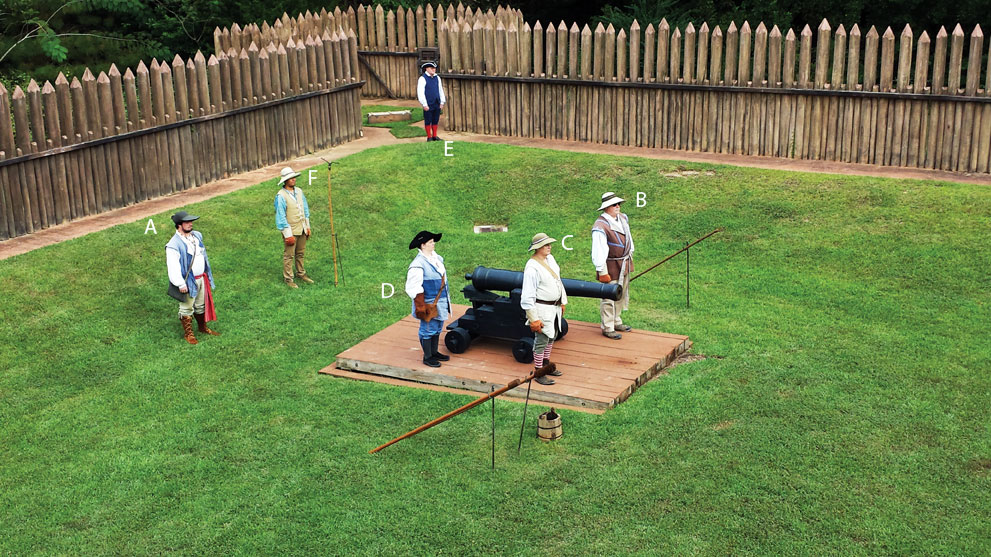 How to fire a cannon in 9 steps

1. The master gunner (A) checks the crew for readiness, and all offer a prayer to Santa Barbara, the patron saint of artillerymen.

2. The left front gunner (B) takes a “worm” and runs it down the length of the tube to clear any obstructions.

3. The right front gunner (C) takes a sponge and runs it down the tube while the vent tender (D) closes the vent at the rear of the gun to make an airtight seal. Wetted, the sponge puts out any remaining embers from the previous shot and can also snag any debris.

4. The master gunner calls for the powder cartridge (which is formed using modern aluminum foil), and the powder tender (E) hands it to the left front gunner while the right front gunner stands ready to ram it home. The vent tender stays in place to keep the tube sealed from airflow.

5. The left front gunner places the black powder cartridge at the muzzle. At the command, the right front man uses a ramrod to drive the cartridge to the rear of the cannon, so the vent is directly in line with it. The two front gunners then step back.

6. The vent tender inserts a long brass pick into the vent and punches a hole in the cartridge to expose the powder.

7. Once the cartridge is opened, the vent tender inserts a black powder priming quill into the vent.

8. The linstock (a wooden staff topped with a trident holding a specially treated cotton cord) is brought up by the linstock tender (F). One end of the cord is pre-lit; the gunner blows on it/flicks away ash to achieve a sharp-tipped burning coal.

9. On the command of the master gunner, the linstock tender steps up and touches the burning tip to the primer quill. If all is done correctly, the quill ignites, sending flame into the main powder charge — and the cannon fires.