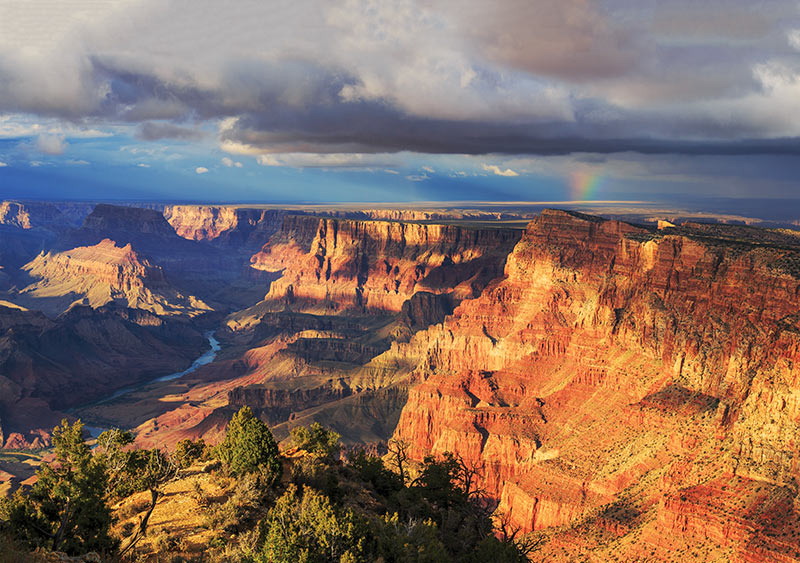 The South Rim extends farther than the eye can see; its accessibility, amenities and stop-and-star views attract countless visitors.

The air is brisk and pure — the cleanest my lungs have ever taken in. I steady my breathing, which is labored from the trek that got me to my vista. Inhale, exhale, in through the nose, out through the mouth. I’m calm — maybe the calmest I’ve ever been — as I look down from my elevation of 7,250 feet. One slip of my foot and I could fall; but there is an eagle gliding through the wind below me. Oddly enough, the sight brings me comfort.

I could have stood on Yaki Point much longer, my thoughts undisturbed in the solace of that place, but my sister taps me on the shoulder and reminds me that we have to be back on the tour bus in 10 minutes. We begin our descent, and when we reach the place where the slightly-less-adventurous hikers are waiting, I see the look on my mom’s face and know immediately what’s coming.

She knows it’s a pointless battle. She knows the women she has raised. As we amble back to the bus, my grandmother pulls me close and says, “If I could hike that, I would have done it, too.” 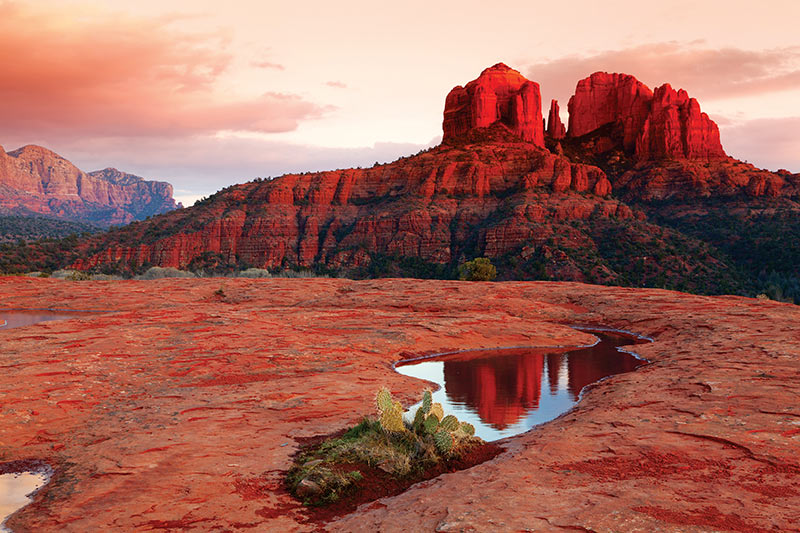 Sedona is known for its rusted red rocks and massive structures including Cathedral Rock, which reaches for the heavens.

Grandmother and the Grand Canyon

We all have a bucket list. Maybe you haven’t written yours down or recited it aloud, but you have ambitions you want to achieve and adventures you want to experience before you die. For as long as I can remember, my grandmother has wanted to see the Grand Canyon. She is the product of a generation who was taught that to view the canyon is to have embarked on the Great American Adventure.

Don’t get me wrong, I was eager to see the Grand Canyon when my mom, grandma, sister and I began to plan our trip. It seemed beautiful from the National Geographic programs I had seen. But honestly, I just love to travel: You can book me a plane ticket to anywhere, and I will go.

I simply didn’t realize that the Grand Canyon could move me so deeply.

From Phoenix, Arizona All the Way to Sedona

When flying to the Grand Canyon, you have a few arrival options: The Flagstaff, Arizona airport is small and is the closest to the canyon; the Las Vegas, Nevada airport is a great choice if you’re not with your grandmother; and then there’s the Phoenix, Arizona airport — our chosen hub. We selected Phoenix Sky Harbor because we wanted to fly into a larger airport, and we wanted to make stops on the three-hour drive to our hotel in Williams, Arizona. 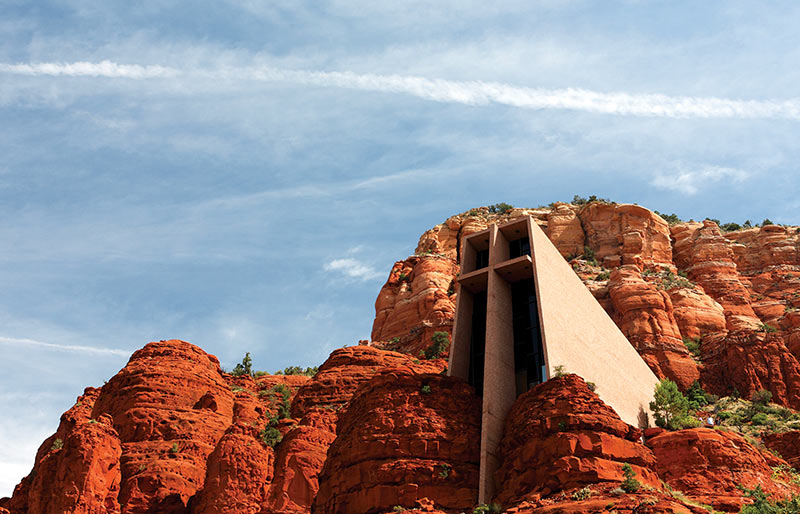 The Chapel of the Holy Cross, a Roman Catholic Church built into a butte, is a Sedona must-see.

I joined my mom, sister and grandmother in the baggage claim, after which we hit the road to Sedona by rental car. As Florida natives, we had never witnessed the terrain of Arizona. Dusty red clay reflected from the ground onto the buildings we passed. The landscape went from flat and barren to jagged with boulders. We drove winding mountain roads interspersed with jade-green shrubbery and cacti taller than most men I know. The two-hour drive to Sedona passed pleasantly.

We had precious minutes of daylight left by the time we reached Sedona, and I had sights I intended to see, the first of which was the Chapel of the Holy Cross. Although the church was surprisingly easy to find, we arrived to a locked gate. So we settled for a roadside view, which was still spectacular. The giant cross for which this church is famous rises 250 feet in the air and is 90 feet wide. As someone who sees God most presently in nature, it was, in a way, better for me just to view the cross jutting out of the red rocks.

The rugged terrain continued as we stopped to view landmarks such as Cathedral Rock and Bell Rock. Our stomachs were beginning to growl. As foodies, we had already selected our dinner destination. The Hudson presents large windows and an expansive porch for viewing the valley, which is especially pleasant at sunset. We dined on an impressive cheeseboard, the Sedona Quinoa and Brussels Sprout salad, the Hudson Portobello mushroom burger and the salmon prepared with brown sugar fennel butter. Red wine seemed appropriate.

Feeling well fed, we were ready to make the drive to the Grand Canyon Railway Hotel in Williams. What we hadn’t accounted for was the early sunset, which led us into deep valley roads that lacked roadside lighting. It was thrilling for some, not so for others. I suggest making the drive in the daytime so you can enjoy the views.

At the crack of 9 a.m., the Grand Canyon Railway’s train rolls out of the station in Williams on a two-hour pursuit of the Grand Canyon. The train has varying levels of seating, from bench seats and open windows to plush seating and a skybox with 360-degree views. At first, the sights were of rolling planes speckled with windmills; but those changed to conifers and craggy mountains when we began our ascent. The luxury seating also offered a breakfast bar and a libations menu. Naturally, champagne was in order.

The train dropped us off directly in front of Maswik Lodge, which was comprised of cabins much like those you remember from summer camp. Fortunately, there were no bunk beds; instead the inside was modeled after a hotel room. The front desk was very helpful in setting us up on tours that provided stunning views while also being grandma-friendly.

There are various dining options on the Grand Canyon’s South Rim campus, from cafeteria-style to sit-down, and from family-friendly to fine dining. The El Tovar dining room is world-renowned and serves up steak, fish, decadent desserts and a gourmet wine list. Still, you can’t help but let the fork miss your mouth as you steal glances at the massive rock structures outside the restaurant’s windows.

There are multiple modes of transportation, including bus, foot and donkey. For the most part, we took bus tours, and my sister and I hiked. The bus tours were very informative and lasted anywhere from one to four hours, depending on how far you wanted to travel.

The Rim Trail is the easiest to hike for those who are not avid hikers but who want to enjoy beautiful views from some of the highest points. Bus tours also follow along this trail. There are guided hikes into the canyon, or you can make this venture solo. The donkey rides are one of the most popular attractions, as they allow guests to travel on donkey-back either around the rim or into the canyon for an overnight stay at Phantom Ranch.

Although it sounds odd to watch a movie when you could be basking in the great outdoors, I suggest watching the IMAX movie on your Grand Canyon trip. It’s likely that the movie has been used at the canyon for many years, but I left the theater feeling immensely informed and very appreciative of those who realized the canyon’s splendor and facilitated its making into a national park. With this deeper understanding, I was ready to take in the views.

A View From the Top

The tour guides were some of the most cheerful people I’ve yet to encounter, and they were highly knowledgeable about their surroundings. We were told that depending on the time of day or vantage point, the canyon could look very different. I was skeptical: How different could what was, essentially, a massive hole in the ground, look? Turns out, the guides know their stuff.

Seventy feet above the canyon floor, the Desert View Watchtower provides unparalleled panoramic views of the South Rim. The turquoise and ultramarine hues of the Colorado River are seen most beautifully at Horseshoe Bend.

A daytime tour of Yavapai Point offers up impressive views of the Colorado River — a deep turquoise ribbon that cuts and juts through the rocks at the bottom of the canyon. The river slips in and out of sight around mountain corners, making it easy enough for the untrained eye to miss; however, there are times when its appearance is so striking and clear, you can detect white waves of foam splashing against the paddles of fearless rafters.

I watched hikers with trekking poles and passengers on donkey-back navigate the great spiral downward, into the unknown. I watched condors and eagles glide effortlessly below me. I imagined that this was how the higher powers must feel as they watch life unfold, progress and move below.

At one vantage point, I spotted a shack, thousands of feet below me. Although it could have been there for any reason, it made me reflect on Emery and Ellsworth Kolb, the photographer brothers, who captured some of the first images of the canyon and rushed to small shacks to develop and sell the photos. Standing on ledges, propelling from heights and rushing through rapids, these ambitious men often put their lives at risk for the photos they took.

As I pointed to the shack, the striking turquoise and lapis lazuli banded in silver that adorned my left index finger caught my eye. In part, because it was newly purchased from the Hopi House’s impressive Native American jewelry selection. I will never meet the Navajo woman who made my ring, but I could feel her presence within it. I looked across the mesas that stretched for miles on end before me, and I knew that for 10,000 years, members of Navajo, Havasupai, Hopi, Zuni and other indigenous tribes have stood there before me. There is a beauty in making history.

Red dirt, red rocks, red dusted shoes. If states had a national color, this cinnabar shade would be Arizona’s. The canyons are composed of this rusted color, but the layers of rock between their crevices take on chameleon qualities based on the time of day. Sulfuric yellows and algae-tinted greens cast their hues in the morning hours, but the canyon that has inspired paintings for so many years is best viewed at sunset.

We took a bus tour that lasted for three hours, delivered us to the major points along the South Rim and ended at what was promised to be the best sunset-watching vantage anywhere along the canyon. The sun was making its initial descent as we took to the top of the Desert View Watchtower. The valley below was surprisingly lush for an otherwise barren landscape. Knowing my childhood affinity for “The Lion King,” my grandmother whispered to me, “It looks just like the Pride Lands.” She wasn’t wrong.

We boarded the bus in pursuit of our final destination. I began to fret a little, as the sun slipped further away, thinking we wouldn’t reach our spot in time to see the grandeur of the setting sun. As if sensing our anticipation, the driver accelerated, and we arrived with 15 minutes to enjoy.

Rusted red sunk into deep crimson, brushstrokes of purple and creases of cobalt burst through. The sun, a brilliant yellow, mimicked the colors of the canyon as it set: red to purple to blue to black. My sister, my mother, my grandmother … we didn’t speak. Instead, we held each other.