Susan Cerulean finds solace and purpose in the natural world

Anyone who has walked a loved one along the meandering descent dictated by dementia or who is attuned enough to the outdoors to be able to distinguish among a plover, a sandpiper and a killdeer will find Tallahassee author Susan Cerulean’s latest book, I Have Been Assigned the Single Bird, to be an affecting and, in some ways, disturbing work.

This is a book about separation.

Separation of a man from his faculties, a mother from her son, humankind from the natural world.

The death of Cerulean’s father Bob, following years of mental and bodily deterioration, was at some point inescapable. And the author knew, of course, that her son David would one day leave the nest, departing in his case for Wesleyan University in faraway Connecticut.

But we are left by Cerulean to wonder whether the ongoing destruction of the biosphere and its inhabitants and their wonders and their ways is somehow reversible. Might enough people, treading lightly upon the planet and each looking after some tiny part of it, some single bird, combine to halt our unconscionable progress toward a final environmental calamity?

Cerulean sees the natural world as a whole and in the tiniest of components. She is given to sadness upon seeing the way in which an invasive vine is overtaking the crowns of a small knot of trees outside the window of her father’s room in a nursing home.

“I really ought to take a chainsaw to that kudzu,” she says to her dad. “Or pay someone to knock it back so the trees won’t die.” But the impulse is short-lived.

Writes Cerulean, “The kudzu’s growth felt so inevitable, I didn’t take it on.”

For the author, birds and most especially shorebirds are as canaries, environmental barometers.

She assumes responsibility for counting their numbers at a breeding site in Apalachicola Bay — a small odiferous dot of land smothered in dredge spoils. Cerulean has taken part in bird counts since 1976, and while she does not regard herself as the best counter, she believes there is none more passionate. Of that, she convinces her reader.

“It’s difficult to advocate for something if you don’t know how it is faring,” Cerulean writes. “If people or beings can’t tell you with their voices how they are and what they truly need, how are we to understand how to help?”

It is precisely that condition that Cerulean’s father approaches before, finally, the dying is done.

His decline begins when he suffers a stroke. Weeks later, attempting to grill some burgers, he puts the patties directly on the coals.  And then came the neurologist’s diagnosis: Alzheimer’s disease.

When, years later, his wife died, Cerulean moved Dad from a facility in New Jersey to one in Tallahassee.

He becomes increasingly dependent and at times belligerent. Cerulean finds it necessary to hire caregivers to supplement the work of the facility’s staff and her own efforts on his behalf.

He is horribly vulnerable. He has become a single bird.

I spied a single roving snowy plover chick. On long spindled legs, the chick investigated the beach all alone, its voice trilling a tiny stream of audible bubbles. He resembled a little marshmallow Easter chick, except covered with gray and buff down, instead of  yellow sugar. No tail, no feathers at all, a soft white cowl on the back of his neck.

Such vulnerability as that. 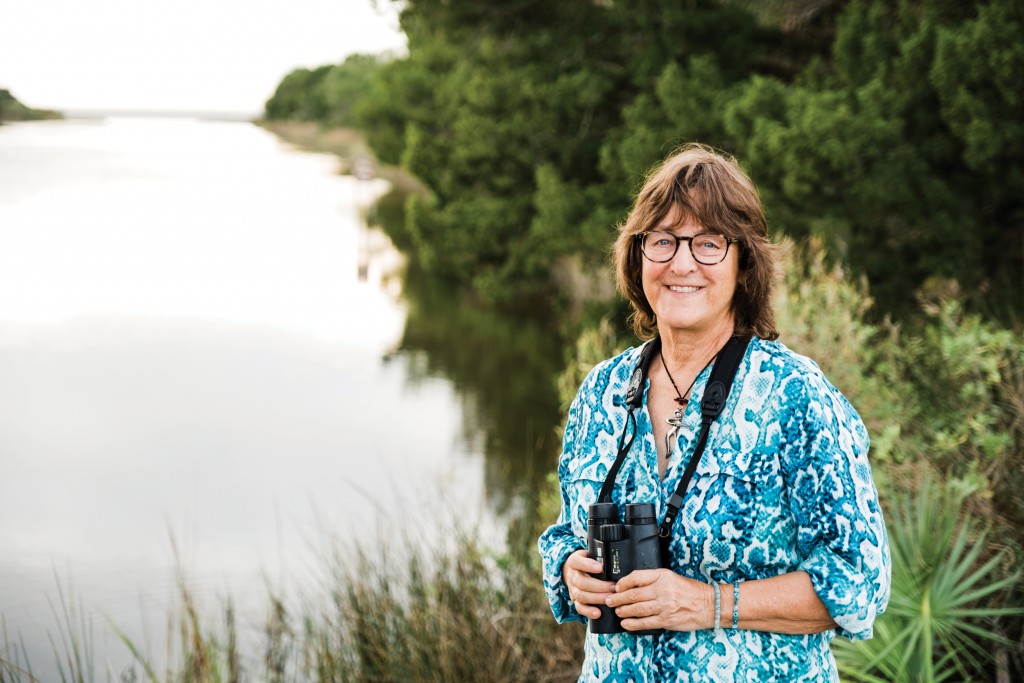 Author Susan Cerulean, with binoculars at the ready, often retreats to natural habitats like the St. Marks Wildlife Refuge. Photography by Saige Roberts.

Cerulean was a wildlife biologist by trade and worked for the state’s Nongame Wildlife Program, which was established during Bob Graham’s time as governor. As part of their work, program staff wrote a guidebook to viewing wildlife and pursued a Watchable Wildlife initiative to encourage Florida counties “to value their wildlands and creatures.”

Cerulean long considered habitat loss to be the single greatest threat to the world’s fauna. In Florida, bulldozers and asphalt spreaders were always all around her. Her husband Jeff, an oceanographer and biogeochemist, was the first to impress upon her the concept of climate change.

Caused to recognize that humans, burners of fossil fuels, are altering the climate to which life has adapted for millennia, Cerulean finds that her job is too inconsequential.

It can seem very small.

She travels to Glades County in South Florida to deliver a keynote speech at a birding festival. It attracts but a couple of dozen people. At dinner preceding her remarks, she engages a couple in conversation. They are not birdwatchers, as it happens, but concessionaires — caramelized popcorn. A festival organizer recruits county employees from a nearby courthouse to come and eat. There is way too much gator tail, venison and softshell turtle stew on hand.

We operate, most of us, at such remove from wildlife that we disturb and destroy it unknowingly.

Cerulean, like a doctor on rounds, makes regular trips to the spoil island. On one visit, she viewed through a spotting scope 30 terns protecting nests. A tern jackpot, as she puts it. A few days later, none were present.

Participants in a fundraising “Paddlejam” event, Cerulean would learn, had gathered in Apalachicola Bay resolved to set a record for the number of kayaks lashed together at one time. They used the spoil island as a staging area, displacing the terns and causing them to abandon their nests.

A reader winces at the telling of that anecdote, as he does when Cerulean mentions a decision by the Gulf County Commission to issue permits allowing motorists to drive to the tip of Cape San Blas, once the province of shorebirds and the occasional hiker/fisherman.

I once asked the wildlife and wild scenes photographer David Moynahan, who contributed photos to Single Bird, how he deals with environmental degradation and removal. He told me he chooses to focus not on what’s been lost, but what we still have.

Cerulean, subject to personal imperatives, does both. She marvels at a solitary oystercatcher egg and rues the loss of 50, 60, 70, 80 percent of the populations of some bird species.

With her books, she has sought to enlarge her advocacy, and as the foundation for her writings, she has placed herself “into direct experience and intimacy with the birds.”

She prays to and for the Earth. For her, “there is no greater authority.”

Exiting the bird conference, Cerulean drives beneath a sky filled with tree swallows and finds comfort there.

“At last, a true festival of birds,” she writes.