How Far The U.S. Navy Went to Deny the Confederates 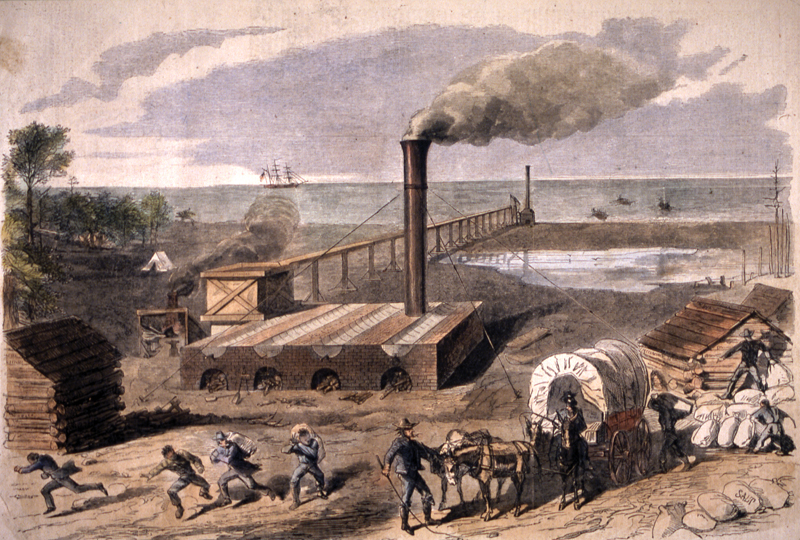 This rendering circa 1862 depicts the destruction of a rebel salt factory on the Florida coast.

It was a highly successful raid. Or a fearsome loss of valuable equipment. All depending on what side you were on. The three-day saltworks raid in St. Marks by sailors and crew of the USS Tahoma in February 1864 was perhaps the most serious effort by the Union to target an essential ingredient in the Southern war effort.

Back in the days before refrigeration kept food fresh and safe, salt was used extensively to preserve meat. Salt literally sucked the life out of any microbes or mold attempting to purchase a foothold in meat. The more salt used, the longer meat can be stored, but the saltier and less palatable the taste becomes.

During the second half of the Civil War, as the Union chokehold tightened around the whole Confederacy, Florida became a valuable supply source of this essential mineral (as well as other vital commodities such as cattle, cotton, timber and turpentine). Numerous saltworks dotted the Gulf Coast from Choctawhatchee Bay (modern-day Destin) down to Tampa Bay.

After building up its fleet, the U.S Navy blockade squadrons decided not only to blockade Southern ports but also to actively seek and destroy rebel saltworks (as well as any other resource that supported the Southern war effort). Without the boilers and kettles, you couldn’t process seawater into salt. Without salt, you couldn’t preserve the meat. Without wagons, mules and harnesses, you couldn’t haul the meat. It was that simple.

The damage at St. Marks, detailed in a report by Theodorus Bailey, commander of the U.S. Navy’s East Gulf Blockading Squadron, indicates that much more than just salt was destroyed or captured by the Tahoma’s landing parties. Among the items were 390 salt kettles; 52 sheet-iron boilers; 170 brick and stone furnaces; 150 pumps, wells and aqueducts; 55 storehouses; 165 houses and shanties; 60 sheds and stables; 6,000 bushels of salt in barrels; a “large number of axes, shovels and hoes”; one carpenter’s shop with tools; one fishing house; 600 bushels of corn; and 350 cords of wood. In addition, the raid captured (or stole, again depending upon your perspective) five large wagons, 15 mules, 2,500 pounds of bacon, two horses, 1,000 head of cattle and one prisoner, a “government agent” by the name of G.R. Paul.

It was perhaps the biggest haul of the war for the Union navy. And it certainly gave Southern supply officers a big headache. Although salt would continue to be produced here, it had officially become a strategic target. A week later, the Tahoma’s raiding parties were at it again, this time in nearby Goose Creek. This raid netted 2,000 bushels of salt in barrels and bins, corncribs, hay and fodder, blacksmith’s and carpenter’s shops and tools, storehouses and stables, kettles and pans, boilers, 98 “well-constructed” brick furnaces, wagons and carts, and mule harnesses.

In terms of money value, the total damage done by the landing parties came to an estimated $2 million. The South could scarcely afford the loss of such a commodity.

The Union navy didn’t just attack the works around St. Marks. The salt operations around greater St. Andrews Bay were also a prime target. A recent drought in that region had caused an increase in the salinity of the huge bay, which allowed the salt-making business to boom. Some 2,500 men were employed in this one area alone. Devoted to the interdiction of this trade was the USS Restless, whose crew regularly struck the targets there because they were often rebuilt. In early February 1864, the crew of the Restless conducted a raid by land and by sea to put the works out of business. Acting Master W.R. Browne filed this in his after-action report:

“Learning that the rebels had erected new Government salt works on West Bay, on the site of the old salt works destroyed by us in December, and that they had a force of 50 men armed and stationed there for protection, I fitted out the first cutter, manned with 13 men, under charge of Acting Ensign James J. Russell, with orders to proceed up the Gulf coast 20 miles, and march inland 7 miles to the salt works and attack them in the rear, while Acting Ensign Henry Eason with 10 men, in command of the second cutter, would proceed by the inside passage and attack them in the front at the same time.”

Browne reported that the expedition was “entirely successful” because the 50 armed men apparently skedaddled when the Yankees approached. Not clear is whether these were actual regular army soldiers, or armed civilians who were otherwise engaged in the commercial enterprise. It really didn’t matter, because civilian salt workers — although exempt from military service — were treated as soldiers by the Federals.

They proceeded to destroy everything connected to salt manufacturing on the site, which had only been operating for 10 days, and rescue seven slaves.

About a week later, Browne and the Restless’ crew was back in the area, this time looking for a barge that was expected to arrive and pick up a cargo of salt on the southwest side of East Bay. An expedition was fitted out and set out to ambush the barge, which didn’t show up. Instead, the crew landed and destroyed all the works they could find. “Some of the largest Government salt works ever erected in Florida” were destroyed, Browne said in his report. Six slaves were brought back to the ship afterward.

The Restless returned in October 1864 to land another expedition. Despite the destruction, the Confederate government — embroiled in a battle to stay alive — kept allocating men, money and other scarce resources to build and rebuild these works. That indicates how vital salt was to the war effort. But as persistent as the Confederates were, the U.S. Navy was just as dogged.

Naturally, salt prices skyrocketed during the war, and the Southern men handling the evaporators stood a good chance of being shot at and shelled by Federal gunboats or landing parties. In one case, three saltmakers from Alabama were executed in Campbellton during the Battle of Marianna, according to historian Dale Cox. The men were with the Dale County Militia and were escorting a salt wagon back to Alabama when they were intercepted by Union troops, Cox said.