Homeowners Warming Up to The Idea of Fire Pits 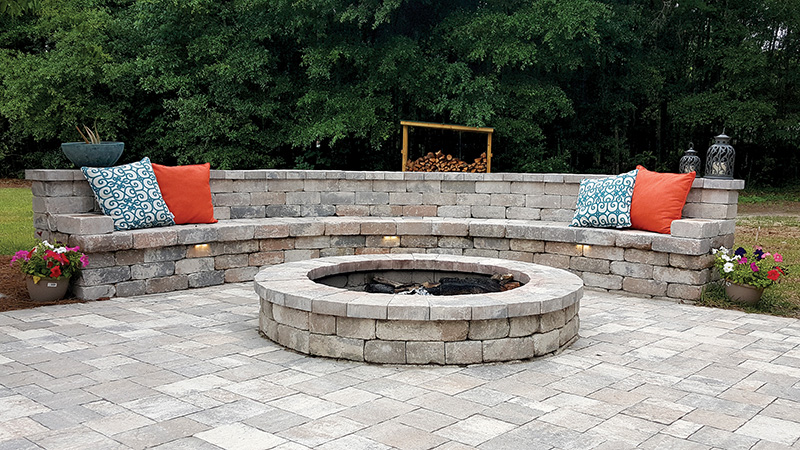 In the 350,000 or so years since human beings learned to control fire and expanded their range to colder climes, what was once an essential has become an accessory. But our fascination with fire never has cooled and today, many feel that their back yards would be incomplete minus a flame feature.

In short, fire pits are hot.

“In the last two to three years here, the popularity of outdoor living spaces has increased,” explains Turner Prosser, the owner of the hardscaping company, Keystone Design, which often works alongside Tallahassee Nurseries. “Tallahassee’s nice cool falls mean you can gather with friends and enjoy a fire outside — and when the setting is aesthetically pleasing, that makes it especially attractive to people.”

Growing numbers of homeowners are making patios, fire pits and BBQs part of their outdoor spaces. According to Prosser, people are looking for cost-effective ways to extend their homes and embrace the outdoors. Budgets for such projects, he says, run from $5,000 to $10,000.

Low-cost fire pit alternatives include simple $500 kits that homeowners can install themselves — and move around as they please, like a steel cauldron. More elaborate fixed fire pits may require assistance from a professional hardscaper and may cost thousands of dollars, depending on their size and the material used. Natural stone is a favorite.

“I tell people that building an outdoor living space is the cheapest addition you can ever put on your house,” Prosser says. “After people have had them installed, they usually find they are more valuable than they realized and they appreciate the ‘wow factor’ and compliments they get from their friends and neighbors.”

Stacey Birch, a mother of two, says that “jazzing up” the backyard became a priority when she and her family moved into their new home and found its outdoor space dull. They had the patio resurfaced and added a large pergola and fire pit made of wall stone. While they went over her $15,000 budget by several thousand dollars, Birch said the investment was worthwhile and breathed new life into their backyard.

“We were so pleased with it, it didn’t bother us in any way,” Birch says. “Now we like to invite couples and their kids, where they can hang out and throw the football. Parents can grill and the kids can roast marshmallows or grill some hot dogs.”

Such projects may seem daunting, but, says Prosser, homeowners should not be dissuaded from embarking on little adventures aimed at rejuvenating and expanding their living space.

“There’s so many things that people don’t know about that we can create for them,” Prosser says. “People come to us with half-baked ideas and we help them develop them into nice outdoor living spaces.”

Tips for Your Backyard Project

Shop Around for Ideas

Sites including Pinterest and Google Images can be a huge (and free) source of ideas. Search “backyard ideas” on the sites and you’ll be kept you busy combing through thousands of photos.

While talking things over at the house is a good start, hiring a designer will help turn your vision into a comprehensive, workable plan. Experienced designers are equipped with photos of tasteful and successful projects that can help you visualize possibilities.

Whether it’s $8,000 or $20,000, a budget helps iron out details for designers, installers and the homeowners, themselves. That way, there are no last-minute surprises.

If you’re going to spend thousands of dollars on your home, it’s best to do some research on installers in your area. Get references on hardscapers to make sure they are competent and easy to work with.