One of Tallahassee’s earliest examples of public art is getting a new-age rendition.

Artemis Jegart’s mural of the “Capitol Center” greeted travelers at Tallahassee’s original Municipal Airport once it opened in 1961. Now, Mickey Adair, a fine art photographer and portraitist in Tallahassee for more than 40 years, is bringing the mural back to life at Tallahassee International Airport.

Adair’s photo composite of Jegart’s mural will be on display in the Observation Room on the second floor of the Tallahassee International Airport through Aug. 19.

“It needs to find a new home. It belongs at the airport,” Adair said.

The exhibition is one of many curated by the Council on Culture & Arts on behalf of the City of Tallahassee as part of the Art in Public Places program.

Adair frequented the “old airport,” where he rented planes for aerial photo assignments. He would admire Jegart’s mural, though cubicles obscured it after the space no longer served passengers.

In 2005, after buying his first digital camera, Adair and friend Larry Coltharp were able to successfully light and shoot the mural. Adair photographed individual portions of the painting and later “stitched” them together using Photoshop. 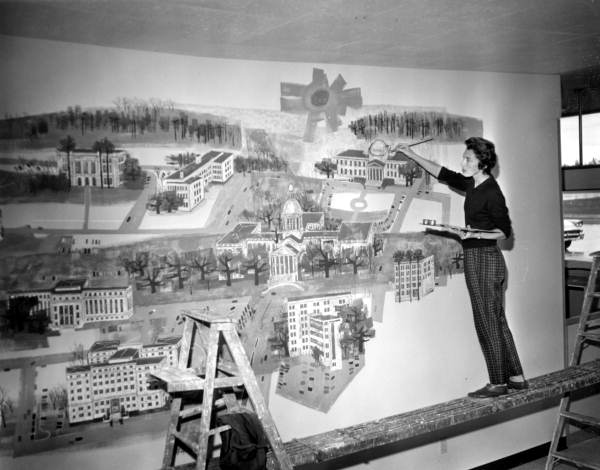 “The mural is very beautiful, and I’m proud of the city for commissioning this artist to create such a lovely rendition of Tallahassee,” Adair said. “There’s an image of a jet airplane in it, and it’s announcing the dawn of the jet age in Tallahassee.”

Jegart completed numerous paintings, murals and mosaics during her life. A Florida native, she attended Florida State University, where she earned a bachelor’s and master’s degree in art.

After a brief time in Atlanta working as a commercial artist, she returned to Tallahassee where she spent much of her professional life.

Her paintings were widely exhibited locally and regionally in invitational and juried shows, and they received many awards. In 1956, she was named one of the outstanding new talents in the Unites States by Art in America.

She worked primarily in oils and polymer and used a style reminiscent of collage. Much of her subject matter was inspired by her surroundings in the Big Bend.