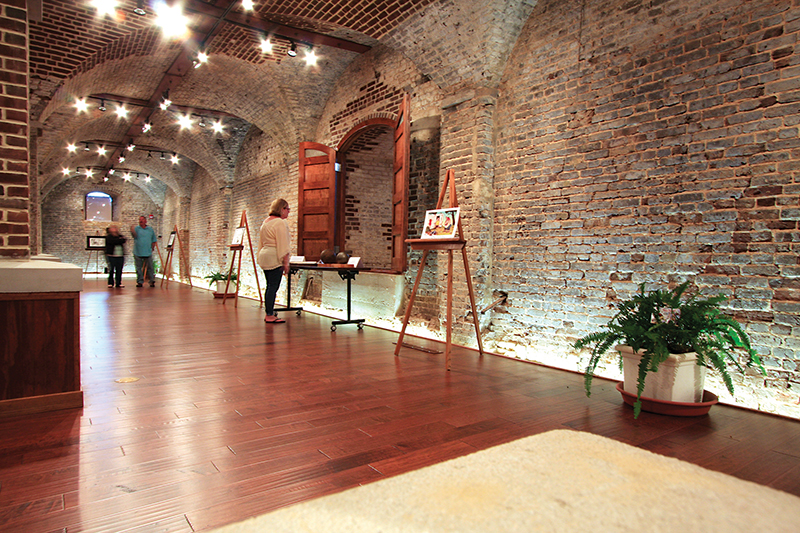 Construction on what what would become the Apalachicola Arsenal began around 1832 and was completed in 1839. Although much of the original complex is gone, a surviving powder magazine now serves as a museum of the area’s history.

It may seem that time has forgotten the tiny town of Chattahoochee, but the town hasn’t forgotten its history.

“There’s too much history to just let go,” said Linda Kranert, a grants specialist who serves as the de facto gatekeeper of the Apalachicola Arsenal Museum, a former gunpowder magazine that Kranert helped rescue from demolition and oblivion back in the early 1990s.

“I started working for (Florida State Hospital) in 1993, and when I came to this building on a tour, I fell in love with it,” Kranert recalled. “It was slated for demolition; the roof had caved in and trees were growing inside it.”

Kranert didn’t want to lose the unique old building. She was able to convince the right people that the right thing to do would be to preserve it. Thanks to her efforts, the first restoration grant was procured in 1995. Although she moved to Orlando shortly after that, a grant committee submitted half a dozen more reconstruction grants during her absence.  When she returned to North Florida in 2013, the work had been completed. The plan now calls for transforming the renewed building into a museum of local history.

“So, out of retirement I have come back to try and help get this going,” she said.

The magazine was one of two such buildings located just outside the Apalachicola Arsenal, a federal armory built in the late 1830s during the height of the Second Seminole War. The arsenal originally featured several buildings sheltered behind a 9-foot-high, 30-inch-thick perimeter wall that encircled the four-acre complex. The arsenal contained a five-story shot tower along with workshops, storage areas, barracks, officers quarters and other buildings within the wall; but two powder magazines and a sutler’s store were built outside, according to historian Dale Cox.

The arsenal and its valuable stores of gunpowder, paper cartridges, muskets and cannon were commandeered by Florida militia troops just days before the state seceded from the Union in January 1861. After the war, the powder magazine we see today was used to house a mattress factory, morgue and wooden coffin factory.

Now, rather than store gunpowder, the new museum will store memories and artifacts that tell the history of not just the arsenal and Florida State Hospital, but the Apalachicola River, as well. One plan calls for an interactive exhibit to teach kids about the river and what fish can be caught there. Another interesting exhibit will take visitors on a virtual steamboat tour of the river. Those are literally on the drawing board for the near future.

Right now, the museum is only open for special events, but if you want to pay a visit, give Kranert a call, and she will make arrangements for you. A historical society has been founded, and Kranert said that once it’s up and running, the museum should “start to open up more.”

The Apalachicola Arsenal Museum is located within the campus of Florida State Hospital. To get there from Tallahassee, take I-10 to the Chattahoochee Exit (166).

Go right off the exit and follow it to the end of the road and turn right again. Take that to U.S. Highway 90 (you will see the Florida State Hospital entrance across from you) and turn right again. Go past Maple Street (at the blinking caution light) and turn left at Jinks Crossing Road. There is a sign that says “Arsenal.” Follow the signs from there. For questions contact Linda Kranert at (850) 794-0197.

Photography isn’t allowed on the grounds of FSH, generally, but you shouldn’t have a problem photographing the museum. Just ask Kranert what is permissible.

While you’re in Chattahoochee, you should also stop at River Landing Park and check out the Chattahoochee Landing Mounds, which are remnants of an ages-old ceremonial complex of the Fort Walton Period. The mounds are located at a public boat ramp on River Landing Road, just off U.S. 90. Research also shows that the British built a small outpost overlooking the river there, during the War of 1812. Two historical markers tell the story. Torreya State Park is also in the vicinity and is worth a visit, too.