Here’s Why You Should Visit the Kolomoki Mounds State Park

You don't have to go too far away to be able to transport yourself on a 80-mile trip back in time.

About 1,650 years ago, a group of people living in what is now Southwest Georgia began to transform their centuries-old village into a city that became a trade hub, a religiouscenter and the cradle of the most highly developed and populous society in the region.

Kolomoki, as the city site is called today, is also home to at least eight earthen mounds.

For 400 years, Kolomoki thrived. Its people traded far and wide, exchanging pearls they had gleaned from river mussels for conch shells from the coast and copper from the north.

Then, around six centuries ago, the culture at Kolomoki began to change, and the city’s population dwindled.

Today, Kolomoki is one of three historic state parks in Georgia. This designation is given only to state parks that feature important archaeological sites and scenic recreation areas.

So hop in the car with your camping equipment, and head to Kolomoki Mounds State Park for a self-guided tour of the archaeological site and museum and a relaxing weekend of camping. 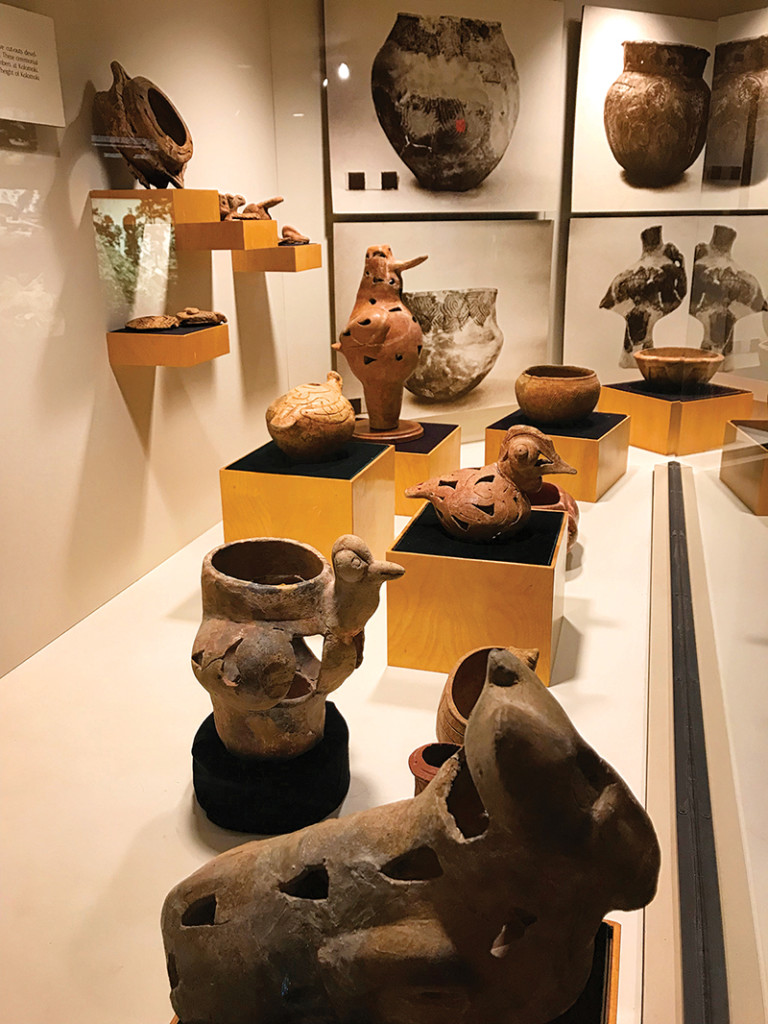 Stamped pottery and effigy vessels were used during the Woodland Period when Kolomoki was inhabited by 1,500–2,000 native people. Photo by Kim Harris Thacker

The Temple Mound at Kolomoki, Mound A, was the center of activity at the time when it was built over 700 years ago. It overlooked a large, open plaza that was surrounded by houses and extensive bean and corn gardens. A massive earthwork, the Temple Mound measures 325 feet by 200 feet at its base — about the same size as a football field — and is roughly 56 feet high. More than 11.5 million gallons of dirt would have been needed to build Mound A, and archaeologists who have studied the mound agree that it took about two months to build. In other words, thousands of people worked together on this project.

Mounds B and C

The purpose of Mounds B and C remains a mystery to archaeologists. All that is known about these mounds is that they are almost exactly the same size, they are equidistant from the Temple Mound (one on the north side; one on the south side) and they have a solar alignment.

These mounds are burial sites. The people who inhabited Kolomoki at different times had complex religious beliefs that included human sacrifice. When a leader died, he was taken to the top of one of the burial mounds with his servants, slaves and wives, all of whom were sacrificed atop the mound. Other people who had died between the time of the previous leader’s burial and the recent leader’s death, and whose bodies had been stored in one of the buildings on the Temple Mound, were added to the mass grave. Cremated remains, trophy skulls, effigy pottery and sacred objects were also added, and all were covered in clay. When the next leader died, the process was repeated, thus forming the many layers of the two burial mounds.

Mound E is contained, in part, within the visitors center. The portion in the visitors center is an excavation site, and it looks exactly as it did when archaeologists left it, with one exception: The four skeletons that were found during excavation have been replaced with plastic replicas. The pottery that is on display is authentic.

Originally built to the same dimensions, these mounds both contain internal clay platforms and some pottery. Archaeologists believe that the mounds may have been used for ceremonial purposes or as monuments to the leaders buried in Mounds D and E.

This mound may be naturally occurring. It contains the remains of the Mercier family — the owners of the plantation land that, during the 19th century, included Kolomoki.

The site of Kolomoki occupies 300 acres in southwest Georgia on Little Kolomoki Creek, which is 15 miles east of the Chattahoochee River.

Tallahassee has two mound sites: The Lake Jackson Mounds, which were the ceremonial center of the Fort Walton Culture and inhabited from 1050–1500 AD; and the Letchworth-Love Mounds — home to the tallest mound in Florida, which was built by the Weeden Island people sometime between 200 and 900 AD.