No Need to Leave Town, City Folk Can Enjoy Chickens in Their Own Backyard

Looking for pets that earn their keep? Well look no farther than your neighbor’s chicken coop.

Keeping backyard chickens is growing in popularity as the sustainable living movement attracts more followers, the economy continues to plod along at a sluggish rate and people become more concerned about the food they consume — and the food their food is consuming. Because backyard chicken coops generally don’t have to be licensed, there’s no statistical proof on the growing numbers, but there’s plenty of anecdotal evidence.

“There’s nothing like a fresh egg,” said Calynne Hill. She and her husband, Lou, keep a flock of 14 hens at their home off North Meridian Road. They gather the rainbow every time they collect a basket of eggs from their flock of variously colored birds: Rhode Island Reds, Plymouths, a Buff Orpington and several other varieties.

“It’s great to share the eggs with friends, and the chickens are so entertaining,” she said. “They have such distinct personalities, and it’s fun to watch them dust their feathers.”

In addition to providing eggs and putting on a show while taking dust baths, chickens make great composters. They eat kitchen scraps and garden trimmings, producing excellent fertilizer in the form of chicken manure. Caution: Fresh chicken manure is very high in nitrogen, or “hot,” and it will burn your plants. Let it age for a few months before adding it to your garden.

Chickens will also eat the bugs, grass and weeds in the area where they’re allowed to roam. Hill said they even eat poison ivy. If you have two enclosed areas, you can alternate using them for chicken yards and for gardens. As a bonus, the birds do your prep work for you. 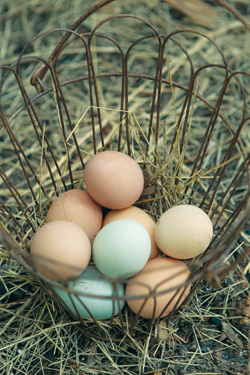 Hill, a local real estate agent and Tallahassee Magazine’s style editor, started out with five hens, which she acquired from her son’s girlfriend when the woman was moving and couldn’t take them.  She doesn’t have a rooster, though.

“I’ve had people say, ‘Don’t you have to have a rooster to get eggs?’ and I tell them, ‘My gosh, you don’t know much about the birds and the bees, do you?’ ” Hill said with a chuckle.
For the record, the hens will lay eggs with or without a rooster present. Those eggs won’t be fertilized, though, so forget thinking you’ll get baby chicks. For that, you do need the big guy.

Chickens — and the Law
Contrary to popular belief, it is not illegal to keep chickens within the city limits of Tallahassee, nor is there a limit on the number of hens a backyard chicken farmer can have. Leon County doesn’t have any restrictions covering the unincorporated areas of the county, either. Section 4:5 of the city’s Animal Control Ordinance deals with “keeping livestock or fowl,” and subsection d (2) allows “the keeping of female chickens (hens) for non-commercial purposes so long as they are confined in a securely enclosed yard or pen at all times and are kept no closer than 20 feet to neighboring dwellings. In addition, a single rooster may be kept in conjunction with said hens for the purpose of flock sustainability.”

However, all backyard chicken operations must abide by other city ordinances dealing with noise and nuisance, and sanitation. It’s the noise and nuisance that makes keeping roosters in the city a dicey proposition. Although some backyard-chicken proponents argue that a cock’s crow at dawn is less a nuisance than a chorus of dogs baying at the moon, most choose to keep their hens without male companionship and avoid accusations of ruining the serenity of the neighborhood.

Another section of the law says anyone who had more than one rooster when the ordinance was passed in 2010 is “grandfathered” to keep them — but only those roosters, not any replacements. “If someone had five roosters at that time, they’re grandfathered for those roosters, not to keep five roosters in perpetuity,” said Lt. Jeff Doyle, the city’s animal control supervisor.
Even though the city and the county both allow backyard chickens, hold off on getting your flock until you have clearance that your neighborhood allows poultry. A number of neighborhoods have restrictive covenants, which you agreed to when you bought your house, so check the fine print.

The latter situations generally resolve themselves without any assistance or interference from animal control, which is a good thing. Imagine going down to the animal shelter looking for your lost hen and then being unable to say for sure which one was yours from a cage full of sad-faced cluckers on the lam.

“I can’t think of an instance where we brought in a chicken,” he said. “There’s no way to ID them.”

While commercial growers often use metal bands with identification numbers around the bird’s leg to keep track of inventory, many home hobbyists don’t tag their birds at all. Others use plastic ties or metal zip ties in different colors.

When the city looked at revising and updating its animal control ordinance several years ago, after more than a decade, the issue of keeping chickens got the most response.

The same thing has been true across the country. Five years ago, Chicagoans turned out to fight a proposal to ban backyard chickens in the city, after an estimated 700 complaints the previous year. Most were rooster calls. Madison, Wis., and Phoenix, Ariz., have laws that lay out the rules for keeping chickens.

High-Style Hens
Kay Rutherford, a master gardener who keeps about a dozen hens at her home on the southeast side of town, has a rooster named Pops.

“He runs interference with the hens, keeps them corralled, protects them, but they could do their work without him,” said Rutherford.

She got Pops and her first dozen hens in 2009. He and two hens are all that remain of that first flock. She lost the rest to wandering dogs and wildlife that have a particular penchant for poultry.

That’s when she replaced her coop and pen with a Poultry Palace, a more secure coop with a sky bridge to an A-frame structure. The chickens are protected from owls and hawks that can swoop down and snatch a chicken in an instant, as well as raccoons, foxes, possums, coyotes and the occasional marauding dog or cat.

Hill used to let her hens free-range on the property, but they roosted in the garage, making a mess, and they pecked and tore up her vegetable garden; over time, wildlife killed a number of chickens — and eggs. Several years ago she hired a contractor to build a high-end chicken coop inside a large penned area. The spacious coop is wrapped in sheet metal 2 feet high all the way around the bottom, and the metal extends beneath the soil another foot. A standard-size screen door sits open during the day, allowing easy access to refill the automatic feeders as well as for the chickens to get to a series of ladders up to the nesting box, which can be opened from the outside to gather the eggs. The whole coop is shut tight and locked when the chickens are in for the night.

Chicken coops and pens can range from a couple hundred dollars for a do-it-yourself “chicken tractor,” an open-bottomed contraption that lets the chickens get sunlight, air and access to the ground but can be moved once they’ve eaten the weeds, grass and bugs; to several thousand dollars for a permanent structure such as Hill’s. It’s a good idea to start at the low end of the price range and see whether you’re going to stick with it before you invest big bucks.

“It’s so rewarding,” Hill said. “My grandparents had chickens, and I remember gathering the eggs with them. Now, I’m sharing that tradition with my 2 ½-year-old grandson.”