Halloween Costumes Can Be Scary Business

Halloween always was one of my favorite holidays as a kid. And it wasn’t just the candy – though I’ll admit that the lady who gave out raisins wasn’t my first stop. There was something magical about the whole Trick or Treat night: a slight chill in the air, the thrill of running free around the neighborhood as the sky got darker (back when it was still safe to do that), and, of course, dressing up in costumes.

My mom really threw herself into the costume making. No generic store-bought Wonder Woman for my sister or me. Oh no, we got an authentic get-up with all the trimmings, from our magical lassos to our red leather knee boots. And the year I was “I Dream of Jeannie,” I was the envy of every girl in my class. True, we missed the sheer red drapes for a while, but my red genie pants were the talk of fourth grade.

I still love to dress up. But I’m not quite the expert my mom was. I can’t operate a sewing machine without injuring myself, and let’s just say that constructing a Raggedy Ann costume out of a pillow case and one of my sister’s old pompoms is an even worse idea than it sounds.

Drawing on decades of experience — both my successes and my pitfalls — I thought I might offer some advice to those of you who are new to the whole costume thing. 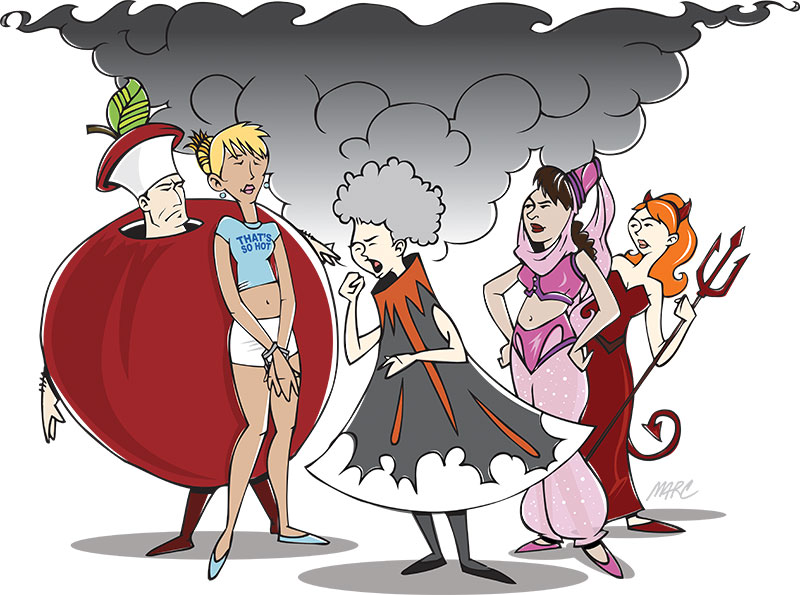 There is such a thing as “too much costume.” I once worked with a gal named Helen who thought it would be hilarious to show up at a friend’s Halloween party as Mount St. Helen. She went all out: papier mâché volcano with a cut-out for her head, smoke escaping from the top courtesy of a Marlboro Light. It was really awesome.

But about two hours into the party, Helen started to get hot. And the room started to fill with smoke. Her volcano was way too huge for the tiny two-bedroom apartment, and she couldn’t fit on any of the chairs. Also, her smoking started to really tick off the host.

Clever is good. But it helps to be clever without invading everyone else’s personal space. Or causing respiratory distress for the asthmatics in the room.

Do the ‘Bad Taste’ Test

A sense of humor is a delicate thing. Some people like to push the envelope. Some are easily offended. But no matter how close you are to the host or how authentic your costume, if you’re dressed as Osama Bin Laden, you’ll probably get asked to leave. Ditto for Hitler and O.J. Simpson. There are some people you just don’t want at a party.

Remember, there is a fine line between “Sexy Devil” and “Hooker in Red Leotard.” And a pitchfork is not always enough to make the distinction.

Sometimes, dressing up as a pair is kinda cool: Lucy and Desi, for instance, or Marc Antony and Cleopatra. But make sure that your costume still makes sense if you get separated — if you’re Sonny without Cher, you’re just a guy with a weird mustache. Bacon-and-Eggs or Ketchup-and-Mustard (both available as “humorous couples costumes” from the online costume companies) aren’t even that funny when they’re together, but separate them and you just look odd.

Cute couple costumes work best as parent-and-child combos. For instance, I saw one kindergartner dressed as Batman last year, with his good sport of a dad tagging along in a plastic Robin costume. Everyone who saw them just went, “Awww.”

With adults, though, a little bit of cute goes a long way. As the King and Queen of Hearts, you’re pushing it far enough. But if you don that Plug-and-Outlet costume, expect people to gag.

I once knew a couple who spent the whole night attached at the hip, literally, as “Two Peas in a Pod.” Then he leered at a Sexy Devil, they got into a fight, and the rest of the evening was awkward for everyone.

The Joke Nobody Gets

And speaking of couple costumes, the “Bill and Monica” idea was slightly funny … in 1998. In 2009, though, you just look like some old guy in a suit and a girl in a dirty dress. If you’re going to be timely, be timely.

Of course, what do I know? I dressed my 3-month-old up as a Killer Bee, complete with “ghost bees” dangling from his stroller, and though I found it hilarious, I’m pretty sure I was the only one.

It’s the kiss of death if you have to spend all night explaining the joke. Like the year I went as a “Trophy Wife” — everyone thought I was the Statue of Liberty. And by the time I explained it, I’m afraid what was left of the so-called cleverness had worn off. But I wasn’t as bad as the guy dressed as “God’s Gift to Women.” It took the wind out of his sails when he had to keep answering that no, he wasn’t a Christmas present.

This rule is as important as it is obvious: Consider where you’re going to wear this costume. Volunteering at your church’s fall festival clearly is not the best place to don the super-realistic Hellraiser mask. This seems like no-brainer advice, but you’d be surprised.

Showing up for work as a Naughty Nurse probably will slap a glass ceiling down on top of your career advancement options. In fact, the office is a real minefield; it’s better to play it safe. If you’re a witch or a pirate, you probably can still type. But if you come to the office as the Apple from the Fruit of the Loom commercials or Mr. Potato Head, you may run into some logistical problems — trust me.

Halloween is supposed to be fun, a chance to let your hair down and step into someone — or something — else’s shoes for a day. Even if you’re not an expert with the sewing machine, anyone can throw together a pirate, a witch, a clown, or my sister’s old standby, a hobo.

My baby is a year old this Halloween, so it’s probably the last year I can dress her up before she starts demanding some Disney Princess costume from Wal-Mart. I’ve decided I might pair us up as Rocky and Bullwinkle … I had better call Mom and see what she has planned for her brown curtains.