Winter in Tallahassee and the surrounding area is typically inactive as far as the home lawn is concerned. The grass is not growing and the lawnmower is idle, but surprises can be lurking just below the dormant turf’s surface.

The sudden appearance of bright green splotches could be one of several “weeds” common to the area. One, crimson clover, is a cold season annual frequently seen during North Florida winters, usually on roadsides or in hay fields.

This European native germinates in late autumn but has a slow, steady growth pattern that lets it escape notice until about this time of year. The plants are currently clumps of green leaves among brown grass.

This annual legume will reseed itself when conditions are right and spread to nearby areas. The distinctly red blooms appear in spring and are an early season nectar source for European honeybees.

Another green spot may be Raphanus raphanistrum, the scientific name for wild radish. A native of northern Europe and northern Asia, this annual has spread to most of the world.

The term Raphanus comes from a Greek word meaning rapidly appearing. This accurately describes the rapid emergence and growth of the plant that occurs when the soil temperature falls below 65 degrees and enough moisture is present.

The bloom color of wild radishes can vary.  Yellow and white are the most commonly encountered colors, but occasionally lavender is on display.

Vetch is a low-growing plant easily identified by its elongated dagger-shaped leaves, which are half an inch in length. Birds and animals scatter seed to new areas where the hardy plant will aggressively colonize any suitable environment.

Hand pulling will minimize reseeding from the plants on site, but seed may arrive from afar. Chemical control is unnecessary as these annuals will die when the weather warms. 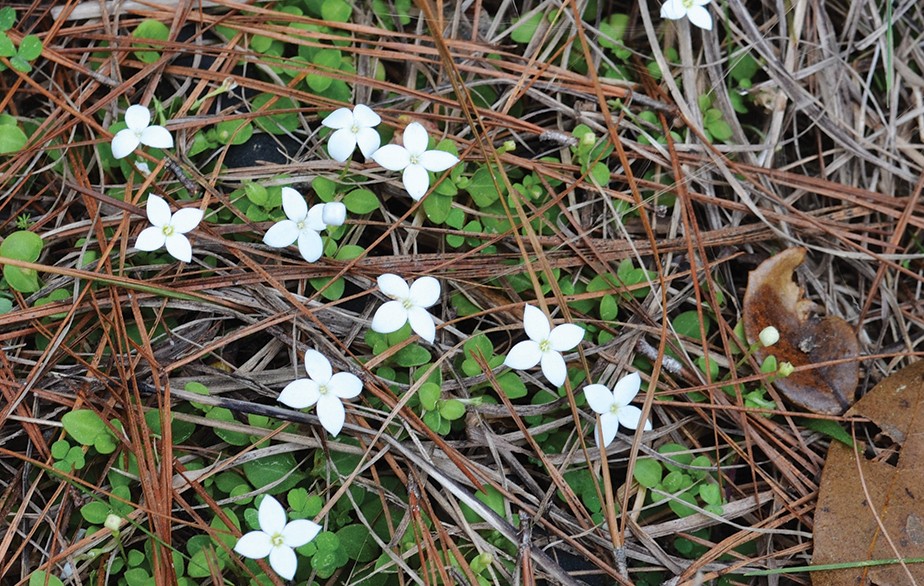 The winter months are not usually associated with native wildflowers, but there are some in the Tallahassee area.

The Roundleaf Bluet or Innocence is a tiny, native wildflower currently in bloom. The white flowers are about the size of a dime and appear in clusters of 10 or more blooms.

The height of this plant is less than two inches, and it barely appears above the decaying leaf litter. The plant requires partial sun but uses the protection offered by tree canopies along with its natural hardiness to produce blossoms during periods of cold and frost.

Another is the common blue violet, sometimes called the wood violet. This dainty and low-growing plant produces a blue to purple bloom in winter and early spring.

It flourishes in heavy shade and filtered light, frequently in mixed hardwood-pine forests. Its seed production capability is such that it occasionally appears in home landscapes under shade trees. 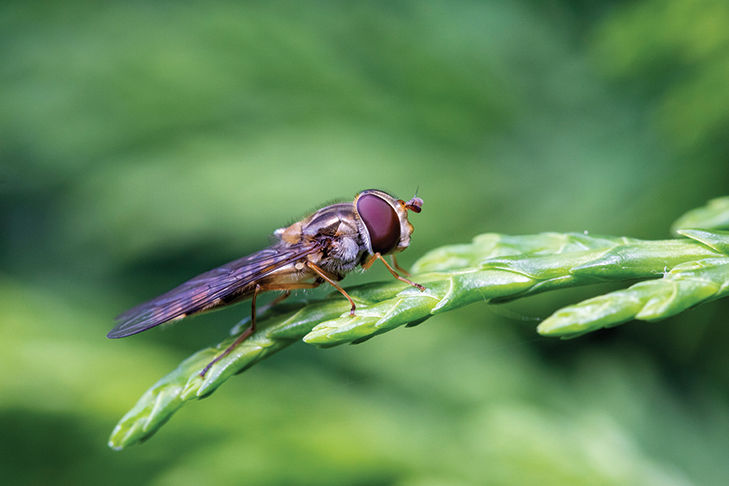 Not as Waspish as it Looks

Like plants, many of the insect pollinators are inactive during the weather. One which is active is the Syrphid fly, sometimes called a hoverfly. This tiny insect works with the available cool season pollen and nectar sources to assure the seed production for next winter’s blooming annuals. Their wasp-like appearance serves as a means of repelling potential predators, especially hungry birds.