Out of the starlight and under the streetlights, couple commits to ‘aging in place’ in the city

For 40 years, Judye McCalman and Earl Morrogh lived in a house they built with their own hands on a wooded acreage seven miles south of Quincy.

There, they tended to a large, organic garden surrounded with tall deer netting tucked into the ground. They loved the brilliance of the night sky and the quiet of the place.

“The sounds you heard were natural sounds,” McCalman said, adding that their property was shaded by majestic hardwoods and frequently visited by wildlife, including foxes and coyotes.

“We miss our pontoon boat on Lake Talquin,” sighed Morrogh, a self-described water baby. He knew where all the submerged stumps were.

But there are tradeoffs to living in the country and, as McCalman, 76, and Morrogh, 71, grew older, the conveniences of city life became more attractive.

In March, they moved into a “forever home” designed to permit them to age comfortably in place and located on Country Club Drive near its intersection with Limbo Lane.

“We have a Country Club Drive address, but we were hoping that it would be Limbo Lane,” Morrogh said. “We don’t consider ourselves to be country club people.”

McCalman and Morrogh were living in Gadsden County as members of an “intentional community” — locals called it a commune — when, to give themselves some privacy, they built what Morrogh called a “small contemporary cracker house” that would be their residence for four decades.

The community, which had been formally established as a corporation, eventually dissolved, as communes often do, and its 150 acres were divvied up. McCalman and Morrogh became owners of 13-acre piece of the pie that included their homesite.

To prepare for building their own home, the couple had taken a class offered at Florida A&M University. McCalman worked for FAMU for 27 years, retiring as the assistant dean for administration for the School of Architecture. It was there that she would first cross paths with student and future architect Cam Whitlock.

Upon deciding to move to town, McCalman and Morrogh weren’t sure that they were going to build, but when they did, they contacted now retired FAMU professor Tim White, seeking a recommendation for an architect. White recommended several, and they selected a Tallahassee firm, Architects Lewis + Whitlock.

The couple, who celebrated their 40th wedding anniversary last year, met with Whitlock at the offices of Architects Lewis + Whitlock in Tallahassee. Whitlock explained that the firm doesn’t do much residential work, focusing instead on municipal and institutional work. Its largest clients include the state Department of Management Services and Florida State University.

“We put on our sad faces and told him that Professor White had said that if he wouldn’t do it, he could always change his grades to incompletes,” McCalman joked.

Whitlock agreed with the understanding that the couple would do much of the design work themselves. Indeed, forever homes have emerged as something of a niche for Whitlock, one that affords him creative latitude.

“Couples who are retiring and looking to downsize are more likely to have a specific program in mind,” he said. “Based on a lifetime of experience, they have specific ideas about the spaces they want and need, and that makes for a smoother design process.”

“Our country house was a successful project, and we have been interested in architectural design ever since,” said Morrogh, who studied architecture for four years at Louisiana State University but wound up working as a magazine designer and communication director before pivoting and becoming the second professional hired at FSU to pioneer online learning. He retired in 2006.

“Having been exposed to the architecture process, we came up with what architects call a program,” Morrogh said. “We itemized all the things that were important to us, and one of those was absolutely no steps, inside or outside,” McCalman added.

“The hallway is wide enough for two wheelchairs so one day we can have races,” Morrogh said. Indeed, Morrogh is probably capable of supercharging a wheelchair. He once built an electric-powered mini-barge and piloted it the entire 106-mile length of the Apalachicola River with a couple of friends, wildlife photographer David Moynahan and Chris Smith.

Whitlock described the Country Club Drive house as “transitional modern.” It measures over 2,600 square feet, heated and cooled, and was built by Southern Standard Construction. Jonathan Hatfield was the project manager. 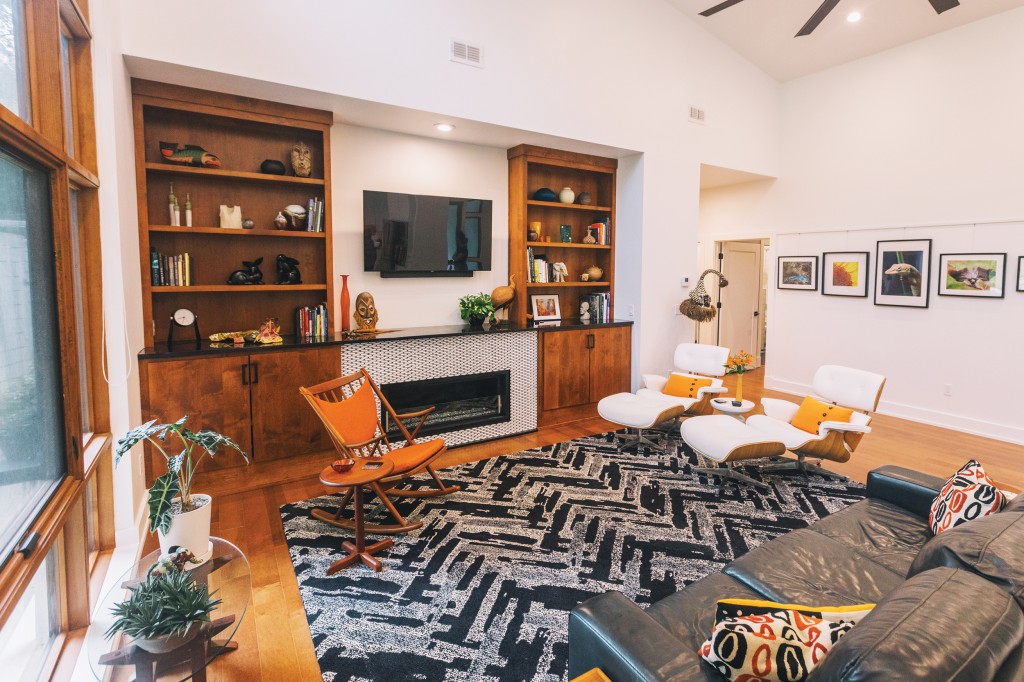 “The house is on a sloped site, so we had to work the grading out to keep everything on one level,” he explained.

Bordered on three sides by green spaces, including Capital City Country Club, the house sits on a half-acre lot that “appears visually to be an acre and a half,” Morrogh said.

While she has plenty of room for a garden, McCalman has vowed not to get back into it. In her lifetime, she has nurtured 100 organic gardens.

“We go to Publix and the Community Co-op,” said Morrogh, who tends toward the sardonic from time to time.

Morrogh and McCalman are finding much to like about life as townies.

They enjoy living in a university town with abundant green spaces and mature vegetation and cultural opportunities. Morrogh likes being within an easy drive of St. Marks and Apalachicola — he once served as a board member for Apalachicola Riverkeeper.

And, the couple finds that they are surrounded by people who share their progressive values.

“Everyone has been very friendly and welcoming, and I look forward to the day when we can invite them all in,” McCalman said.

A Return to Refinement