You Can Find Fossils Right in Your Own Backyard

Traces of a prehistoric world can be found at your feet, right here in Tallahassee.

“Fossils are defined as the remains or physical traces of ancient life,” says Tallahassee native and assistant state geologist Harley Means as he passes a Pleistocene-era horse tooth from one hand to the other. The tooth looks a bit like a piece of rhubarb that was dropped in mud.

“Typically, paleontologists (scientists who study fossils) will put the cutoff between what is and isn’t a fossil somewhere in the latest Pleistocene into the early Holocene — roughly 11,700 years ago.”

Means’ office is a veritable museum of Florida fossils. The state has an abundance of fossils because its geology is especially good at preserving them. Most organisms don’t leave behind fossil remains because it takes a very special set of conditions for fossilization to occur.

Bill Parker, a paleontologist and professor at FSU, explains that the shallow water, crumbly limestone and marine mud that covered this region millions of years ago preserved many organisms almost hermetically. “The clay that was here fit tightly around an organism — like a zip-lock bag,” he says.

“It essentially formed an airtight seal that kept the organism preserved from the time it was buried. That’s why a huge number of the invertebrate fossils that come out of our riverbanks are museum-quality fossils with original shell material.”

Dr. Parker points out that while many people think of a fossil as an organism that has been replaced by other minerals, that is not always the case. Under the right circumstances, a fossilized organism — for example, many of the marine invertebrates that can be found in riverbanks in and around Tallahassee — can retain some of its original materials.

Fossils that are native to Tallahassee include invertebrates such as strombuses, turritellas, coral heads, foraminifera, spiny oysters, conchs and nautiluses; and vertebrates such as early horses, camels and llamas, as well as tapirs, giant bison, elephants, cave bears, rabbits, alligators, turtles, dugongs, sharks and mastodons.

Means says there are no dinosaur fossils to be found in Florida. Dinosaurs died out about 65 million years ago, while the oldest rocks in Florida that aren’t thousands of feet below the surface are a mere 40 million years old.

With the exception of shark teeth, it is illegal to collect vertebrate fossils from state or federal land without a permit. Permits can be obtained from the Florida Museum of Natural History in Gainesville; they cost $5 per year.

“Make sure you follow all the rules and regulations, which can be found on the back of the permit,” says Richard Hulbert, manager of Vertebrate Paleontology Collections at the Florida Museum of Natural History and fossil permits manager for the State of Florida.

For example, no fossil collecting of any kind, whether vertebrate or invertebrate, is allowed in wildlife refuges or within the boundaries of national or state parks. However, invertebrate fossils, including seashells, foliage and petrified wood, can be collected on other public land without a permit.

On private land, no permit is required to hunt for fossils; only the landowner’s permission is required.

“You can find fossils in just about any of the major rivers in Florida,” Hulbert says. This is because, according to Means, our spring-fed rivers — or karst rivers — have a very “low gradient, so the water flows slowly and doesn’t wear things down as much.”

“A short drive from Tallahassee, a little to the west, are some great river sites,” says Dr. Parker. “The Chipola is a source of Miocene and Pliocene coral heads, pearly nautilus and spiny oysters. The Apalachicola is great for vertebrate fossils.”

If a fossil hunter needs help identifying his or her finds, Hulbert and other paleontologists at the Florida Museum of Natural History can help, often just by looking at an emailed photograph of the fossils. 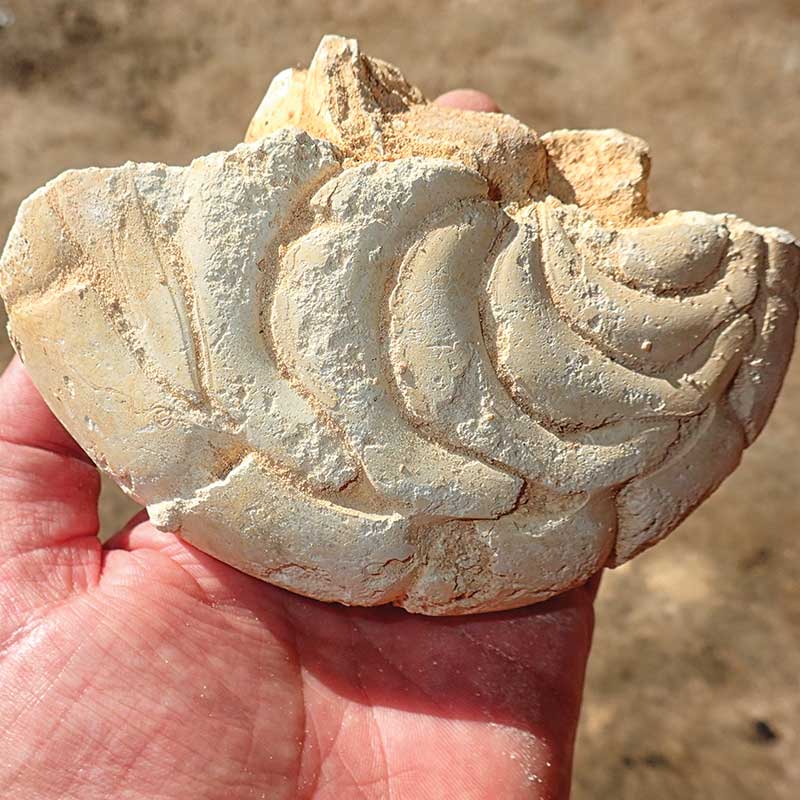 Upon entering the Florida Geological Survey Museum, visitors’ first sight is a massive dugong skeleton. It is a cast of the original skeleton, 18 million years old, that was found in a clay mine near Quincy in the 1950s. The original is on display in New York City at the American Museum of Natural History.
The Geological Survey Museum also boasts impressive examples of Florida’s state stone, agatized coral, and enough shark teeth from an extinct mako to send a shiver down a fossil hunter’s spine.
To see them for yourself, call (850) 617-0316 to schedule a visit during business hours. The museum is at: 3000 Commonwealth Drive, No. 1, Tallahassee.
Governor’s Square Mall: See Jurassic limestone with fossil mollusks (probably from Western Europe) in the floor tiles at the mall.
Strozier Library at FSU: See Ordovician-age reef rocks (from east Tennessee) in the decorative wall stones in the library’s south stairwell.
Longmire Building on FSU campus: See Pleistocene coral heads (from Key Largo) in the mantelpiece and fireplace-surround.
Parking lots: Find fossilized remains of invertebrate marine life (likely from the Avon Park area of Central Florida) in the crushed limestone gravel found in many Tallahassee parking lots.
Categories: History