The old ex-governor witnessed his beloved Florida leave the Union on Jan. 10, 1861. The day after a convention of delegates signed the Ordinance of Secession, a group of pro-secessionist “fire eaters” confronted the staunch Unionist to flaunt their victory.

“Well, Governor, we have done it!” they said.

Call — a passionate advocate of statehood and the Union — was not impressed and chastised them bitterly, waving his cane at them.

“And what have you done? You have opened the gates of Hell, from which shall flow curses of the damned to sink you to perdition,” he said.

Call’s prophetic words would eventually come true in the wake of the looming Civil War, but in 1861 his blunt and openly pro-Union views were shouted down.

Florida, at the time a state for just 16 years, was the third state to secede from the Union 150 years ago, after South Carolina and Mississippi. The state’s secession sesquicentennial marks the start of a raft of events in upcoming years commemorating significant occurrences and battles of the Civil War.

Rise of the Republicans

For years, many state leaders saw secession as the only way to correct grievances against Northern politicians they believed were bent on denying the Southern states’ economic equality. Florida and most of the nation had actually experienced a degree of economic prosperity and growth in the decade before secession, but postwar historians say the new wave of Southern unrest was generated because of the ascendancy of the anti-slavery Republican Party.

Historian Thomas E. Woods Jr. said the Republican Party emerged following the controversy surrounding the Kansas-Nebraska Act of 1854. This legislation — proposed by Illinois Sen. Stephen Douglas — created two territories out of the Nebraska Territory. The act also allowed residents to determine if they did or didn’t want slavery and repealed the Missouri Compromise of 1820, which meant “theoretically” opening these areas up to slavery, Woods said.

The Kansas-Nebraska Act was controversial, Woods asserts, because some territories became states faster than others. If one set of interests took root first, chances are those would have the most influence.

“Had slavery been permitted during the territorial stage, slaveholders would likely have settled in the territory, and increased the possibility that it would become a slave state. This is why the legal issue of slavery in the territories was so important and divisive,” Woods wrote in his 2004 New York Times bestseller “The Politically Incorrect Guide to American History.”

Woods said the turmoil over the Kansas-Nebraska Act “proved too much” for the old Whig Party, which had been formed in the 1830s to oppose the Democratic policies of Andrew Jackson. But by the mid-1850s the Whigs were torn apart by sectional differences. The Republican Party filled the “political vacuum left by the self-destruction of the Whig Party,” Wood said.

“The formation of the Republican party was the primary cause for the vast popular support which aligned itself behind the Florida Democrats,” wrote Stetson University Professor John E. Johns in his 1963 book, “Florida During the Civil War.”

“From the very inception of the Republican party, Florida radicals had watched its progress with alarm,” state historian Dorothy Dodd wrote in a 1933 edition of the Florida Historical Quarterly.

Dodd said Gov. James Broome addressed the Republican problem when he spoke before the state legislature in 1854.

“Governor Broome had recounted the grievances of the South, not the least of which was the existence in non-slaveholding states of ‘fanatical organizations’ that had elected a House of Representatives ‘purely and wickedly sectional in its character’ on a platform of restoration of the Missouri Compromise, repeal of the Fugitive Slave act, and admission of no more slave states into the Union,” she wrote.

In 1856, Democrats continued to denounce the Republican Party as a “fanatical organization,” Johns wrote, and in 1860 tensions reached the boiling point with the election of Republican Abraham Lincoln to the presidency.

There is more to Florida’s secession than a sharp divide between two political parties over the extension or existence of slavery. Jackson County author and historian Dale Cox said that while slavery was an important issue, it wasn’t the only “state’s right” being debated at the time.

“In short, secession in Florida was not as much related to slavery as it was the result of years of growing distrust and anger between South and North that finally exploded in the winter of 1860 with the election of Abraham Lincoln,” he said.

Cox said a decades-long battle had been fought over whether states were sovereign entities able to determine their own fates or whether a strong, centralized government had the right to impose such things as tariffs and fees (on cotton exports, for example). It was, in essence, a 19th-century “cold war,” with the stronger industrial North trying to bend the South’s agrarian culture to its will.

“The Northern business interests pushed their political representatives into taking action to increase tariffs on Southerners who exported their cotton to England and other European countries instead of factories in the North,” he said. “Their goal was to use political maneuvers and the power of the federal government to force the South to provide cotton to New England textile mills at discounted prices.”

Cox said that in many ways, Florida’s secession was driven by younger men and by “fire eaters” such as wartime governor John Milton and many of the state’s newspapers. However, the state was probably more divided against itself over the issue of secession than people today realize.

Slave owners actually had the most to lose from secession and war, Cox said. Many Floridians stood by the “Old Flag” and opposed or sought to delay secession.

“Many individuals of wealth were older and had grown up in the Jacksonian era when ‘Old Hickory’ stood down South Carolina when it threatened to secede,” he said. “Their fathers and grandfathers had served in the War of 1812 and American Revolution, and they were very attached to the Old Flag.” 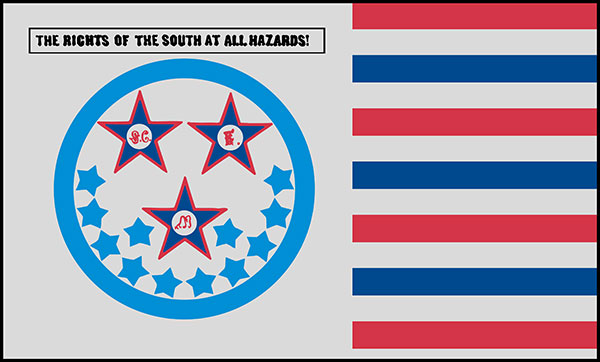 Lincoln’s election did not come as a surprise to Floridians. When the state’s General Assembly met in regular session in November 1860, Gov. Madison Starke Perry told the legislature that the long-anticipated crisis was at hand. He requested the assembly call a convention of the people of the state, revise the militia laws and appropriate $100,000 for a military fund. The legislators moved fast, and bills were introduced to have a convention on Jan. 3, 1861.

Johns, the Stetson University professor, said the question faced by the delegates in their election campaigns was not so much whether or not to secede; rather, it was a question of “immediate secession against cooperative secession.”

“Because of economic and geographic ties with Georgia and Alabama, the ‘co-operativists’ desired Florida to secede only after those states had seceded,” he wrote.

“Call maintained that the calling of a convention of the people at this time could only produce ‘the most fatal consequences.’ He appealed to the patriotism of the people and implored them to remain calm,” Johns wrote. “Fervently he asserted, ‘I pray that in the hour of death, the Stars and Stripes may still wave over me, and wave forever over our whole united country.’”

The convention opened “in an atmosphere of secessionist euphoria,” wrote historian Daniel L. Schafer, professor emeritus of history at the University of North Florida, in a chapter of “The New History of Florida,” a compilation of essays edited by Florida historian Michael Gannon.

However loud the secessionists were, many Floridians remained unconvinced of the need for disunion. “In some counties, Duval and Clay in particular, delegates were elected on public platforms embracing moderation and Union,” Schafer wrote.

But their views did little to block the rising tide. Fire eater John C. McGehee of Madison County was elected convention president. And “with leading secessionists from South Carolina and Alabama in the galleries, the delegates had finished their committee work and prepared an ordinance of secession by 9 January,” Schafer said.

Among the observers was the ardent secessionist Edmund Ruffin of Virginia, who was famous for his outspoken views, and for (according to legend) firing the first shot at the battle of Fort Sumter.

As the secession ordinance was being considered, a faction of delegates offered amendments to delay secession as long as possible. These men included George T. Ward of Leon County and Abraham K. Allison of Gadsden County. But these amendments were defeated.

“Secession fever had spread too rapidly, and turning back was no longer possible,” Schafer wrote.

On Jan. 10, 1861, the final vote was 62-7 in favor of secession. The seven delegates who voted nay were from Jackson, Liberty, Clay, Walton and Orange counties.

When Leon County’s Ward signed the Secession Ordinance, he said, “When I die I want it inscribed upon my tombstone that I was the last man to give up the ship.” Despite his opposition to secession, he would go on to fight and die as a Confederate officer.

Schafer said that by Feb. 4, Florida representatives were in Montgomery, Ala., to participate in the creation of the Confederate States of America.

“It was a time to change flags again, write another constitution, and hold new elections, all under the shadow of looming war,” Schafer said. Despite the enormous task at hand, celebrations abounded across Florida with the news of secession.

“The parades and gun salutes, speeches and toasts, and pure jubilation that greeted the news of secession was evident in every hamlet in Florida,” Schafer wrote. “Crowds filled the hotels in Pensacola, Tallahassee and Jacksonville and danced in the streets amidst torchlight parades and fireworks.”

Only after the war had ravaged Florida’s economy, and the best of its youth lay in graves from Virginia to Tennessee, did Floridians realize the tragic reality of Richard Keith Call’s prophetic words of warning.