A new invention can save soldiers’ lives. 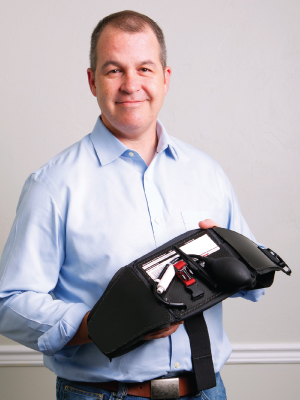 Dr. John Croushorn displays his award-winning invention, the Abdominal Aortic Tourniquet, which is currently being used by soldiers in Afghanistan.

As a doctor trained in emergency medicine who joined the National Guard after 9-11 and was deployed to Iraq in 2004, John Croushorn knew there was a particular sort of wound that, in the past, almost always led to death on the battlefield or in the ER.

When the aorta — the blood vessel leading from the heart that runs down the backbone — is ruptured, it is almost impossible to stop a person from bleeding to death. In wartime, soldiers are particularly vulnerable when they are shot in the pelvis below their body armor. When he returned from his deployment, Croushorn and another doctor, Richard Schwartz, met up at a medical conference and considered the possibility of creating a tourniquet that could stop blood from flowing — “turn off the faucet,” as Croushorn puts it — and save lives.

They started by strapping a blood pressure cuff and a heavy book around a person’s midsection and, after some trial and error, have invented a device that has been fast-tracked through the FDA approval process and is now being used by special forces troops in Afghanistan.

The device, called an Abdominal Aortic Tourniquet, was highlighted in the June 2012 issue of Popular Science as a winner of one of the magazine’s annual Invention Awards.

Croushorn now lives in Birmingham, Ala., but the 42-year-old grew up in a Killearn Acres house where his parents, Jim and Linda Croushorn, still live and was a 1988 graduate of Lincoln High School. He is president of Compression Works, which makes and sells the aortic tourniquet. Croushorn also has interests in other companies that are in the midst of creating other lifesaving devices.

He returned to his hometown last fall to share his thoughts about leadership (“The role of a true leader is not to be the first in line, but to be the one who’s holding the door.”) as a guest speaker at First Baptist Church. Some of the topics he touched on were gleaned from a daily devotional book he coauthored in 2009 called, “Battlefields and Blessings: Stories of Faith and Courage in Iraq and Afghanistan.”

Before heading back to his wife and two children in Alabama, Croushorn stopped by the offices of Rowland Publishing to talk about his invention, how it works and its exciting possibilities for the future.

What does it look like? How does it work? It sort of looks like a fanny pack. It’s got a wedge-shaped bladder, and it’s put around the midsection of the body. It doesn’t matter exactly where. When we’re doing the training we tell the soldiers that the straps should be between the hard parts — the top of the (pelvic bone) and the lower rib cage — and then they tighten it down as tight as they can. So it’s already real snug, and then there’s a windlass that makes it even tighter. The application time is less than a minute from the time the medic reaches the patient until the time it’s on, applied and the bleeding has stopped.

Is it expensive? $475. It replaces a product that weighs eight times as much and costs twice as much.

Are there any other uses besides the military? The big interesting thing for the civilian sector is … for people who have pelvic fractures. We haven’t changed the way we’ve treated that in 70 years. When they reach my ER I tie a sheet around their hip. That’s it. That’s how we treat people that are bleeding in their pelvis, until we get them into the operating room. Now I can turn the faucet off until they get to the operating room.

But the biggest use may be with heart attack patients. We might be able to make cardiac arrest treatment more efficient. When the aorta is clamped off and blood doesn’t have to circulate through the lower body, research has shown that the effectiveness of CPR is increased by a factor of two. Also, when we give adrenaline during a heart attack, it gets circulated to the pinkie toe before it gets to the heart.  Modeling shows we can get three times as much of the drug to the heart, three times faster simply by applying the device. There might be far more use in cardiac arrest than ever in the penetrating trauma world.