Do You Have What It Takes

One Woman’s Attempt to Conquer the Lincoln Center Boxing Workout

This is the warmup:

For boxers, the actual fight is a mere moment compared to the time they invest in conditioning workouts to build the strength, agility and stamina required in the ring.

As a favor to a friend, Tallahasseean Cindy Littlejohn agreed to try the Lincoln Center boxing workout. She looks to be in great shape but confessed that she hasn’t worked out “hard” for a long while.

On what some ladies call the “slippery slope” on the backside of 50, Littlejohn was overwhelmed just by listening to a description of the warmup exercises before she had even put a sneaker to the pavement.

Nevertheless, “I’m here and I’m game,” she said good-naturedly. “Let’s give it a go.”

Eight-year-old Marcus Maxwell, who participates in the youth boxing program, was fascinated by what was happening. He ran over and started adding to Coach Tyres Williams’ comments: “You can’t skip, or you have to start over. Coach says if you cheat on the exercises, you are not benefiting him, you are only cheating yourself.”

It took exactly two minutes before Williams told Littlejohn, “You will have to borrow a wheelchair tomorrow if you do the entire workout.”

“I’m tired,” Littlejohn whispered while breathing heavily after the warmup. Showing compassion and good sense, Williams modified the workout to the “kid’s” level. Everything was cut in half; that meant 50 perfect push-ups (done with push up handles that twist, which makes them a lot harder), 50 wheels (It’s a little wheel with handles. You get on your knees and roll it back and forth to exercise the abdominals.) and 75 sit-ups with a 10-pound medicine ball on your forehead.

“I wanted to learn to box for self-defense, but I also think boxers are in the best shape of any athlete,” Lutz said. “They have endurance, stamina and strength.”

Each exercise in the regimen has a specific purpose. The push-ups hit the back and upper arms and make the shoulders stronger. Rolling out the wheel strengthens the back and stomach so the boxer can endure punches. The sit-ups also tighten the stomach muscles, but adding a medicine ball makes the neck stronger to withstand the whiplash from punches to the face.

It was back to the cardio after the brief conditioning segment. Ever-present Marcus handed Littlejohn a jump rope. Williams grabbed the timer.

The smile had long faded from Littlejohn’s face. Surly comments started between the tormentor and the victim.

Williams reminded her that she hadn’t completed a single round yet. That meant four more rounds of jumping.

After struggling through only a few more rounds, sweating and gasping for air, Littlejohn moved to the next exercise station. The room looked like a small aerobics studio and the weights were tiny, which made them look deceptively easy. Wrong: It was shadowboxing time.

Wrapping a rubber band around the ankles, the concept is to lunge out toward the mirror as if hitting an opponent with a small weight in your hand. Repetitions required in this segment include five minutes with the right foot forward, five minutes with the left, and then an additional five minutes in the center throwing rights, then lefts.

Normally five minutes wouldn’t seem like a long time, but it is an eternity when moving nonstop at full speed.

Shadowboxing next to Littlejohn was 30-year-old Mark McPhee, an amateur boxer.

“I had to crawl out of bed, my legs were so sore when I first started,” McPhee recalled. “I couldn’t do 100 push-ups either. Those first days I only did five.”

Exhausted, Littlejohn pleaded for a water and restroom break. That was allowed and encouraged. It was cool outside but hot in the cramped, no-nonsense gym. It felt as though one was dripping sweat as much from the tight quarters as from the workout.

Before leaving the shadowboxing room, Littlejohn was helped into boxing gloves by young Marcus. An hour into the workout, one could see that she was reevaluating her willingness to help out in this journalistic endeavor. Littlejohn weakly followed Williams into a room filled with punching bags of all shapes and sizes. It was time for the boxing portion of the workout to get her ready for the final phase, the actual ring. 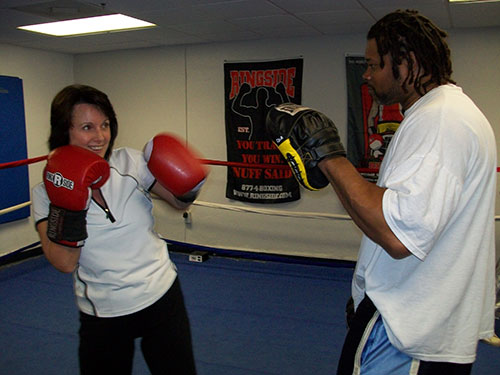 “Breathe, cover your face,” Williams encouraged as Littlejohn jabbed at a heavy bag suspended by a chain. One could hear a meek “thud, thud” as the gloves hit the bag — and it barely moved. The heavy bag makes punches stronger to connect with one’s opponent. In the ring, you’re trying to wear your opponent down or, if you are lucky, knock him (or her) out.

Over Littlejohn’s shoulder were two physically fit young men doing the same drill with a very different effect. With a lot more strength behind their punches, the bag was swinging.

For the first time in almost an hour and half, Littlejohn was laughing and Williams was smiling as the two tackled the accuracy bag.

“I can’t do that,” Littlejohn laughed.

Williams came right back: “Yes you can. It’s like paddle ball when you were a kid.”

Littlejohn lunged at the small bag on a pole, hit it solidly and missed it with the next jab. The ball bobbed and weaved and she lunged at it. It looked easy when Williams steadily punched it in rapid succession but impossible for a novice to do it at even half that speed. This exercise is for hand-eye coordination to help you think faster and move your arm more rapidly. It also wears you out in a minute. Three rounds of five minutes were absolutely out of the question at this point.

The final task was the speed bag. Wait a minute — isn’t that what Littlejohn just did?

This different kind of small bag “is a mental challenge,” Williams explained.

“You do regular punches, but you also do figure-eights,” he said.

The entire workout was both a mental and physical challenge. With the patience of Job, Williams counted out “1-2-3-4-5” slowly, watching as Littlejohn methodically hit the bag and smiled when she missed occasionally. At this point, it was impossible to complete the required sets, but she got the gist of the exercise.

“OK, are you set for the ring?” Williams asked. “I’ll use the mitts with you.”

The ring takes up the entire room, which fortuitously happens to be regulation size for a professional boxing ring.

“The cameras make it look a lot bigger, but this is the size of the real thing,” Williams said. “Jab 1,” he said, and Littlejohn lunged at him. “Cover your face.”

For a round, Littlejohn lunged right, left and then tried an uppercut. There was definitely a smile on her face.

“Who are you hitting as you go for the black and yellow mitt?” Williams asked.

Unable to speak or unwilling to name names, she smiled as she continued around the ring. Williams backed up all the way to the ropes. They turned around and did it the other way.

Almost two hours later, there was weariness but contentment. Littlejohn survived; however, she said, “I will not be coming back.”

(She was able to walk without a wheelchair the next day, but Littlejohn confessed that her legs were incredibly sore and her arms began aching the next evening.)