Canada Geese May Have Overstayed Their Welcome

and Capital City residents have something to say

You’re taking a walk around Lake Ella when you hear honk-honking. Looking upward, you behold a flock of geese flying in a majestic, aerodynamic “V” formation. You smile.

And then you step in a pile of their poop.

Although there are snowbirds that still migrate between the north, where they make babies and live half the year, and the south — where they hang out in the relative warmth and get fat for the return trip — there is another crew who never, ever leave. With water, minimal predators and tasty grass along with food handouts, they’re happy to make Tallahassee their home year-round.

They’re Canada geese, and sometimes, they’re not the best of neighbors.

Aside from that whole poop thing, in April 2016, a state worker was sent to the hospital after a goose attacked her in the parking lot of her SouthWood office, causing her to fall backward and hit her head. A year later, several geese trying to cross Interstate 10 caused a three-car accident.

As director of Tallahassee’s Parks, Recreation and Neighborhood Affairs department, Ashley Edwards fields a lot of complaints about nuisance geese, especially around Lake Ella, where they leave droppings, block traffic as they sashay across the street and occasionally attack the unwary.

“They poop a lot and they poop everywhere,” she said. “They can be aggressive, especially during mating season … and they really do have no fear. A car is not their enemy; a car is somebody else’s problem. They’re going to walk right across. It’s problematic.”

Geese particularly love a body of water next to a well-manicured lawn — which sounds an awful lot like the golf courses and ballfields Edwards’ department is responsible for.

“It’s bad enough at a golf course where your ball can roll through (droppings), but there’s nothing worse than being in the outfield of a softball field and diving for a ball and landing in a pile of you-know-what,” she continued. “It’s why we don’t want dogs on our ballfields, but they’re a lot easier to deal with than geese.”

Geese in the wild are naturally wary of humans, said Peter Kleinhenz, president of the Apalachee Audubon Society. “They don’t want themselves, and especially their young, to be around humans,” he said. “It’s only in the urban setting where they have been fed, have they truly lost their fear of humans.”

Kleinhenz has his own goose encounter tale to tell about, from when he was a 9-year-old in the Midwest:

“When I first moved into my house … we had a pond in the backyard,” he began. “I was going around looking for frogs, and out of nowhere … a dad goose took its wing and hit me straight in the forehead. It knocked me out. It’s like being hit by an aluminum baseball bat. I know how bad it can hurt, and I know how much of a nuisance they can be …. This was up in Ohio where their population is even higher than it is in Tallahassee. It’s what Tallahassee could become.”

Kleinhenz does give his goose nemesis a pass, saying that the bird was probably protecting its young. “If you have babies around and someone’s walking by your babies, I don’t care what animal you are, you’re going to defend them,” he said. 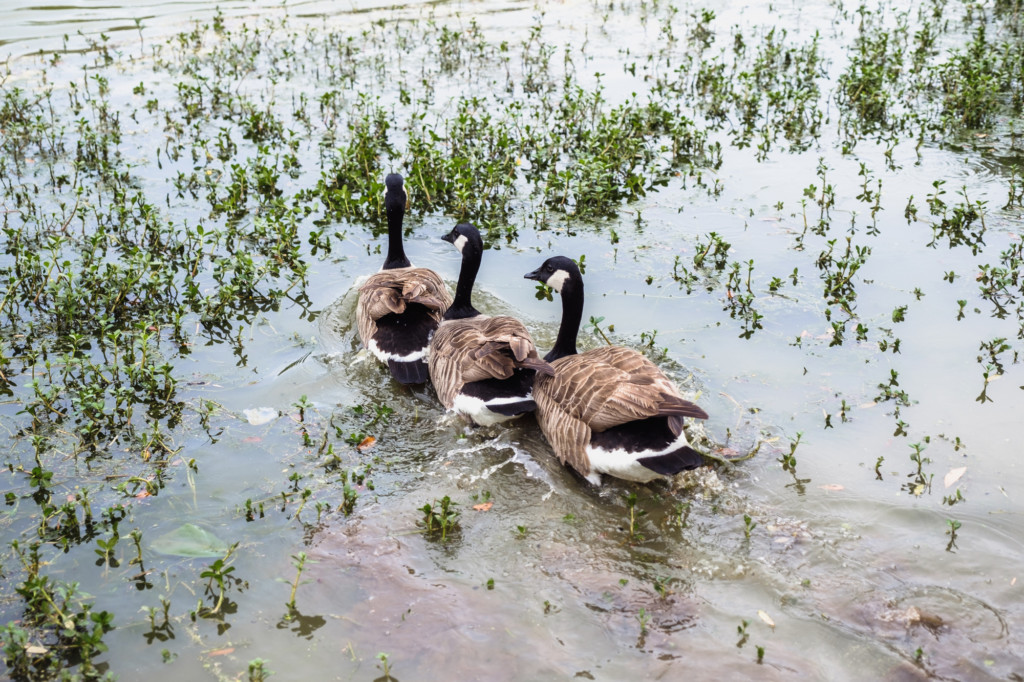 Geese particularly love a body of water next to a well-manicured lawn. Chapman Pond Park fills the bill here. Photo by Saige Roberts

The first sign a goose is aggravated is a head bob, with its neck curving into an “S” shape. Then, it will hiss. “If you hear the hissing, get away … give it some space,” he continued.

Canada geese are considered native to Tallahassee, migrating here in the wintertime for hundreds of thousands of years.

But they were hunted almost to extinction 120 years ago, according to Kleinhenz, and are now one of the great comeback stories of conservation along with other species such as bald eagles and alligators.

The geese were protected by the Migratory Bird Treaty Act of 1918, but in recent years restrictions have been loosened so that with proper federal and state permits, you can haze them, relocate them or destroy their nests and eggs.

There also are Florida goose hunting seasons for about three-and-a-half months in the late fall and winter.

Edwards, of the City of Tallahassee, takes a more live-and-let-live approach to the feathered residents who don’t take well to certain visuals and noises.

“I have seen companies that sell strobe lights, that (geese) don’t like, I have heard people that have … played music in areas. We’ve not really done any of that,” Edwards said.

“You can try to shoo them. The more activity, especially if they’re not being fed, in an area that goes on, they tend to leave. But when they get comfortable, they’re harder to get to move on. It’s a challenge.”

Techniques that have worked well for Leon County’s Parks and Recreation Department don’t harm the geese but capitalize on their natural fear of predators.

When residents started to complain about geese in the county’s Martha Wellman Park, workers installed plastic coyote decoys, according to county Parks and Recreation director Leigh Davis. “Believe it or not that seems to help,” she said.

Another method is to leave about a 10-foot buffer of unmowed grass and native plants around the perimeter of the ponds, which has been successful at Pedrick Pond Park. “The geese can’t see over the grass or through the grass and they get nervous and worried,” explained Leon County water resource scientist Johnny Richardson.

Richardson said he saw the effectiveness of the buffer recently after workers mistakenly mowed a 20-foot-long swath down to the waterline. “The geese showed up, but they hung out at that part of the lake. They weren’t using the whole lake,” he said. “I was walking around — they could see me and then they couldn’t — and they were pretty nervous.”

Naturalist Budd Titlow, author of Bird Brains: Inside the Strange Minds of Our Fine Feathered Friends, says he used to love geese. But now, not so much.

“I’m 72 years old, so when I was growing up, it was really fun and heartening to hear the geese flying in the fall and in the spring because you knew the seasons were changing,” he said. “They’ve become a nuisance bird — that’s the only way I can put it.”

Everyone interviewed for this article said they copped to feeding bread to geese and other birds as youngsters and hate the thought of denying the pleasure to the next generation of children.

Audubon’s Kleinhenz says feeding them makes them dependent on humans and that a steady diet of processed food is harmful to the herbivores and could ultimately kill them.

“I would argue despite the joy that feeding an animal brings, you can get the same level of joy by sitting with your child or children and just quietly watch them going about their lives,” he said.

“If you go to a place like St. Marks, you’re not seeing human-dependent ducks, you’re seeing natural animals. And you can watch them go about their lives, stock up on food, fend off potential predators. All the things animals do. I think that’s just as inspiring and joyous as feeding them.”