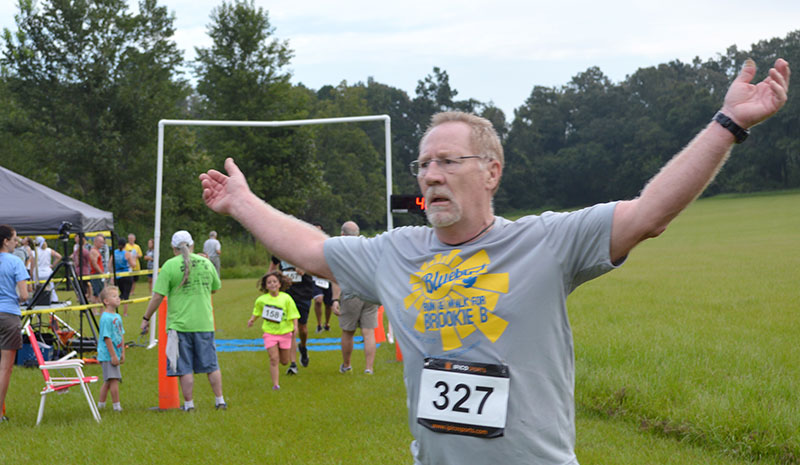 Dick Stephens, one of 80 volunteers who contributed to the success of the inaugural Bluebird 5K Run for Brookie B on Labor Day, turned to me and said, “I think I am going to declare victory.” Not without good reason. The turnout had been strong for a first-year summertime run. I was among 330 people who participated in the event, held thankfully on a cloudy and (relatively) cool day to honor the memory of Brook Bowers, a woman of boundless potential who took her own life following a grueling fight with depression. At some point, she could no longer get back up off the canvas. Proceeds benefited the Tallahassee chapter of the National Alliance on Mental Illness and will be used for suicide protection programs and to provide assistance for survivors of suicide victims. And, too, the run was meant to raise consciousness of mental illness and help reduce the stigma associated with it. According to NAMI, one in five adults has a mental illness, defined as disorders of the brain that disrupt a person’s thinking, feeling, moods or ability to relate to others. That is, it’s highly prevalent for a problem that too few people are willing even to talk about. For me, the race was my first since I sustained an injury months ago playing softball as if I were still just 50 years old. Plus, the course featured a challenge that I didn’t have to deal with for the many years in which I lived nearby the Gulf of Mexico – hills. Still, I told myself that I would resort to walking at no point, and at that I succeeded. I crossed the finish line, headed for the refreshments tent and helped myself to an orange wedge, slices of watermelon and a Gatorade. I had a lingering look at the cookies, but walked on by. But, yes, I’ll confess that I would be back. Snagged two of them. Peanut butter. So good. And, when the age group awards were handed out, my name was called. I made off with a third-place medal, another token of success in an aging runner’s successful battle of attrition. Congratulations to NAMI-Tallahassee for a race well done.