Big Birds in a Small Pond

On the east side of Blairstone Road, a short walk south of Miccosukee, lies a pond — unnamed so far as I know — whose surface area might be 15 acres after a heavy rain. It is nearly bisected by fingers of land, making fishing by terrestrials possible, but I have never seen those spits of soil occupied by a human angler; there is no place in the immediate area to park a car. Rather, the pond’s waters are hunted year-round by egrets snowy and great and strained at times by methodical wood storks.

For the small fishes that inhabit the pond, conditions become especially perilous when American white pelicans, a dozen or more in number, descend upon the place, content to overwinter there. Based upon my observations, made while passing by the birds when driving to and from work, the pelicans don’t much depart the pond for months, leading me to conclude that fish must be present there in terrific abundance. One day, I must make a closer study of the place.

Perhaps it is the pond’s sheltered and relatively secluded location, despite its urban location, that appeals to the pelicans. There, the pelicans engage in cooperative feeding. White pelicans, unlike their brown cousins, ›› do not drop from the sky onto their prey. They are dippers, instead, sliding their pouches into the water in unison and inciting, I suppose, confusion among fishes who suddenly do not know which way to turn. A solitary bill is more easily eluded than a phalanx of them. 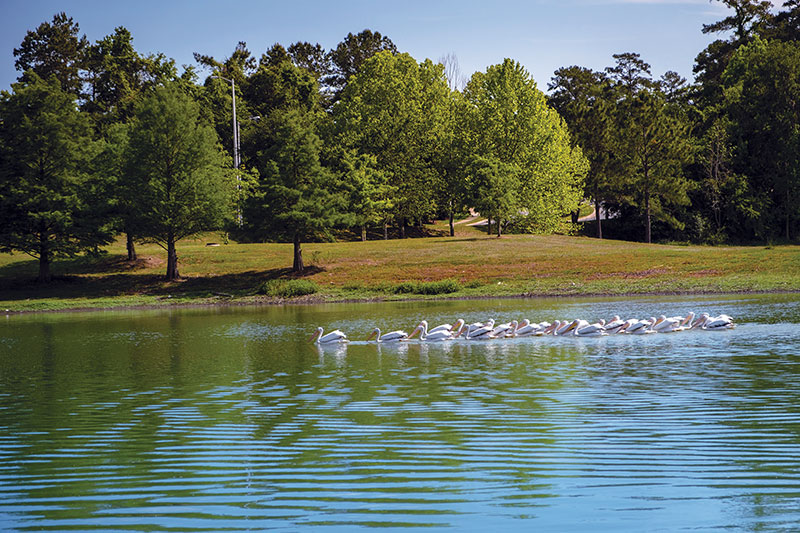 Of all the color plates Audubon painted for his timeless book, Birds of America, Plate No. 311, depicting the American white pelican, made the most powerful impression upon me when I was a child. I was held by a fascination of it that I otherwise reserved for dinosaurs. Never have I been unable to call that painting up in my mind in detail: A solitary pelican stands erect on a sandy shore. Its black flight feathers peak out from beneath its otherwise white plumage. Veins are visible in its pouch. What Audubon described as a “long bony process” sits atop its “upper mandible.”

Called a “horn” by latter-day ornithologists, it occurs only during the breeding season. Whether its size matters among pelicans shopping for mates, I do not know.Audubon described the feeding of white pelicans this way: “Thousands (of minnows) there are, all gay, and the very manner of their mirth, causing the waters to sparkle, invites their foes to advance toward the shoal. And now the pelicans, aware of the faculties of their scaly prey, at once spread out their broad wings, press closely forward with powerful strokes of their feet, drive the little fishes toward the shallow shore, and then, with their enormous pouches spread like so many bag-nets, scoop them out and devour them.”

White pelicans in Europe, given their relative sophistication, I suppose, don’t sport horns. In celebration of that difference, Audubon appended “American” to the white pelican’s common name on this side of the pond, writing, “I have honored it with the name of my beloved country, over the mighty streams of which may this splendid bird wander free and unmolested to the most distant times, as it has already done from the misty ages of unknown antiquity.”

Dr. Emily H. Duval, an associate professor in the Department of Biological Science at Florida State University, supplied Tallahassee Magazine with charts assembled from “citizen science” data at ebird.org and representing the frequency of while pelican sightings in Leon County throughout the year. They peak in January and occur through June, fall to zero during the summer when white pelicans breed in Canada and the Dakotas, and resume in October or November.

I thrill at their return and the improbability of America’s second largest bird — only the California condor has a bigger wing span — hanging out just down the street.

Size  55-70 inches; wingspread, 9 feet.
Habitat: Breeds on freshwater lakes; winters on saltwater bays and bayous (and a pond off Blairstone Road in Tallahassee).
Habits: Soars on updrafts and engages in aerial play; fishes in groups, does not plunge-dive; nests in colonies on islands.
Nest: Vegetation, sticks, stones and debris with raised rim on ground or flattened vegetation.
Eggs: 2, white, 3.5 x 2.2 inches.
Age: To 25 years.