As the sexy ’70s commercial said, we want to “bring home the bacon and fry it up in a pan.” Flash-forward to 2015, when bacon permeates mainstream American culture like never before: There are now over-the-top, bacon-themed weddings; the guy in line next to you is snorting up a “wake up and smell the bacon” app on his smartphone like it’s some kind of drug; and primetime TV is stuffed with commercials for edible bowls made out of bacon. One thing is certain: Delicious, savory bacon is more popular than ever — and that’s enough to make devotees squeal with joy.

Bacon is a meat product prepared from a pig — usually from the side and back cuts of pork except in the United States, where it is almost always prepared from pork belly (typically referred to as “fatty” or “American style” outside of the U.S.). It is usually cured using large quantities of salt, either in a brine or by a dry packing process; the result is fresh bacon (also known as green bacon). Fresh bacon may then be further dried for weeks or months in cold air. 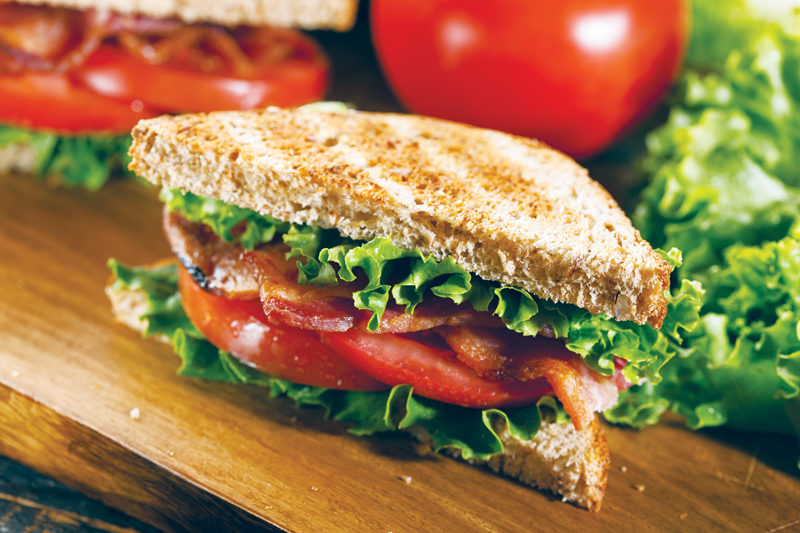 The BLT is a lunchtime sandwich classic.

Bacon can be eaten smoked, boiled, fried, baked or grilled, or used as a minor ingredient to flavor dishes. Bacon is also used for barding (cooking meats with bacon) and larding (weaving bacon through meats) roasts, especially game, including venison and pheasant. The word is derived from the Old High German bacho, meaning “buttock,” “ham” or “side of bacon,” and similar to the Old French bacon.

Meat from other animals, such as beef, lamb, chicken, goat or turkey, may also be cut, cured or otherwise prepared to resemble bacon, and may even be referred to as “bacon.” But for the purist, the U.S. Department of Agriculture defines bacon as “the cured belly of a swine carcass.” (Such a distasteful description for something so delectable!)

For the health-conscious food shopper, bacon isn’t likely the first thing on your grocery list. But if you like to bet, pork belly is not a bad one. Bacon alone is so high in demand, it has put pork on the market map, so to speak. With bacon practically a delicacy, prices have soared, but it’s still a bargain when you consider its flavor-boosting power. And with low-sodium and veggie versions, and lean cuts weighing in at just 39 calories per slice, even dieters can dine on swine and not sweat it.

Top 10 Reasons
Why Bacon Is Best for You

You’ve seen the commercials demanding us to “Eat more chicken” and asking “Where’s the beef?” and “Got milk?” Well, maybe it’s time to pour on the praise for pork by cheering for the benefits of bacon. Here is a list of 10 reasons why bacon is actually healthy for you!