Delectable dessert wafts us away

Some people prefer their apple pie with a slice of cheddar. Others like a dash of cardamon or a shot of brandy. Many insist the premier pies are served à la mode.

No matter how you slice it, apple pie is a delectable dessert. Despite all sorts of fancier flavors emerging from ovens nowadays, the apple pie is still the favorite in the United States, according to a Harris Poll (and others).

“Apple pie has been a part of our history for so long,” said chef Jessica Bright McMullen, owner of KitchenAble Cooking School and Catering in Tallahassee. “I remember my grandmother used to say that apple pie without cheese is like a hug without a squeeze.”

We’ve all heard the expression, “As American as apple pie.”

Turns out that our beloved “American” apple pie didn’t come from America. No surprise that so many of our fruits and vegetables originated in Asia and Europe. Jamestown settlers brought apple cuttings and seeds because the only apples the early settlers found in the United States were crab apples.

“The first recorded recipe for apple pie was written in England in 1381 and called for figs, raisins, pears, saffron and spices,” said Tallahassee chef and cooking teacher Millie Kelsey-Smith, who is from Northampton, England.

Apples and apple pies made their way into the hearts of Americans as advertisers embraced the dessert in the early 1900s. The pie’s place in our culinary world was well-established in the 1940s when fighting “for mom and apple pie” became a common refrain among World War II soldiers.

Over the years, Americans have made the dessert their own creation. Here are some suggestions from local bakers to make the best pie around:

Despite the recipe, a key factor is what apples to use.

Most recipes generally call for tart apples, but “the No. 1 priority is to use apples that have good flavor,” McMullen said. “No matter the variety, you need an apple that’s delicious from the get-go.”

Streety tends to use Honeycrisp or Granny Smith for her pies. “They stand up best to the baking process,” she said.

“The best apple to use is Bramley apples, which you cannot get here in the U.S., but can be substituted with Granny Smith apples,” said Kelsey-Smith.

She and her husband Trevor used to own a Havana cafe called The English Rose. It’s also the name of her culinary operation. She and her husband sell her scones, jams, Indian spices and shortbreads at the Tallahassee Farmers Market. Her favorite recipe for apple pie comes from the Norfolk region of England, where she was born and raised.

However you like your pie, one thing is certain, said Maria Streety, “It’s the ultimate comfort food.”

Instructions
Put the apples, brown sugar, cinnamon and cornstarch in a pot, and stir until incorporated. Add brandy. Heat, constantly stirring, until slightly thickened, but not until apples are cooked through. Pour the filling into the crust. Top with another crust or crumb topping. If you have a top crust, bake for about 50 to 60 minutes at 350 F. If it’s a crumble top, bake for 30 to 40 minutes at 350 F. 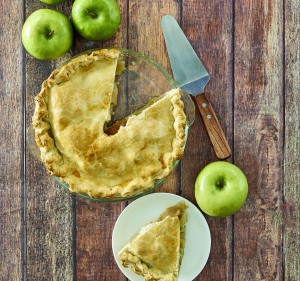 Preparing the Apples
Preheat the oven to 400 F. Use a deep 9-inch pie dish. Peel and slice the apples. Don’t cook them. Just keep them in cold water and lemon juice to keep them from browning until it’s time to assemble the pie. Then drain the apples and coat them with sugar and flour. The juices of the apples will mingle with the sugar and flour as the pie bakes. Together, they will thicken and make the juicy filling that surrounds the apples in the pie.

Making the Pastry and Assembling the Pie

1. Put the flour and salt into a processor with the butter and process until the mixture looks like breadcrumbs, then add a little ice water, 2 tablespoons at a time, until it comes together into a ball.

2. If you do not have a food processor, cut the butter into the flour with two knives, then use your hands to rub it in at the end, and stir in the water with a wooden spoon.

3. Turn the pastry out on a floured board and smooth into a flattish ball, cut out a third and put aside.

4. Now roll out the remaining pastry on a floured work surface until it is large enough to accommodate the pie dish. (I hold the dish over the pastry and make sure it extends about 2 inches all around.)

5. Gently roll the pastry onto the rolling pin and then lay it onto the pie dish.

6. Don’t worry if there are some cracks; just wet your finger and rub some water into the crack and join the pieces together.

7. Gently add the apples and then the marmalade to the lined pie dish.

8. Roll out the rest of the pastry to make a lid, and wet the rim of the bottom half of the pastry with the egg mixture to make a seal. With a knife, trim the pastry all along the side of the dish and decorate the rim as you wish, either with a fork or crimping the pastry together with your fingers.

9. Make a ½-inch hole with a knife in the center of the pie crust.

10. You can use any leftover pastry to cut out leaf shapes.

11. Brush the entire crust with the beaten egg, which will ensure a lovely golden color.

Instructions
Bake dough in the oven for about 30 to 40 minutes or until the crust is a golden-brown color. Ovens vary significantly, so place the pie on the lower rack for about 20 minutes, then move it to the center rack so that the bottom crust cooks well. However, adjust your placement and baking time according to your own oven. When ready, remove the pie from the oven and immediately dust with baker’s (extra fine) sugar (caster sugar in the U.K.) and let cool slightly before serving. Pour the heavy cream or the hot custard over the pie before eating.