and all the interesting knowledge we can uncover from them

Behold a map from 1597 in which Florida appears as you might draw it in a game of Pictionary.

The bays and rivers look crude and off the mark, and the peninsula appears chomped at the bottom, as though the big island to the south got hungry.

But the map is otherwise beautiful, detailed and, considering its age, surprisingly accurate.

It marks one of the dozens of rare antique maps that Tallahassee dermatologist Dr. Armand Cognetta has collected through a fascination with Florida, an appreciation of history and an exemplification of his “mapping” work with skin-cancer patients.

What he has is unique and significant, according to dealers and experts who work with him.

Antonio Raimo, an Atlanta-based dealer of rare books, maps, paintings and antique prints, says Cognetta has amassed the largest collection of Florida maps that exist in fewer than five copies. 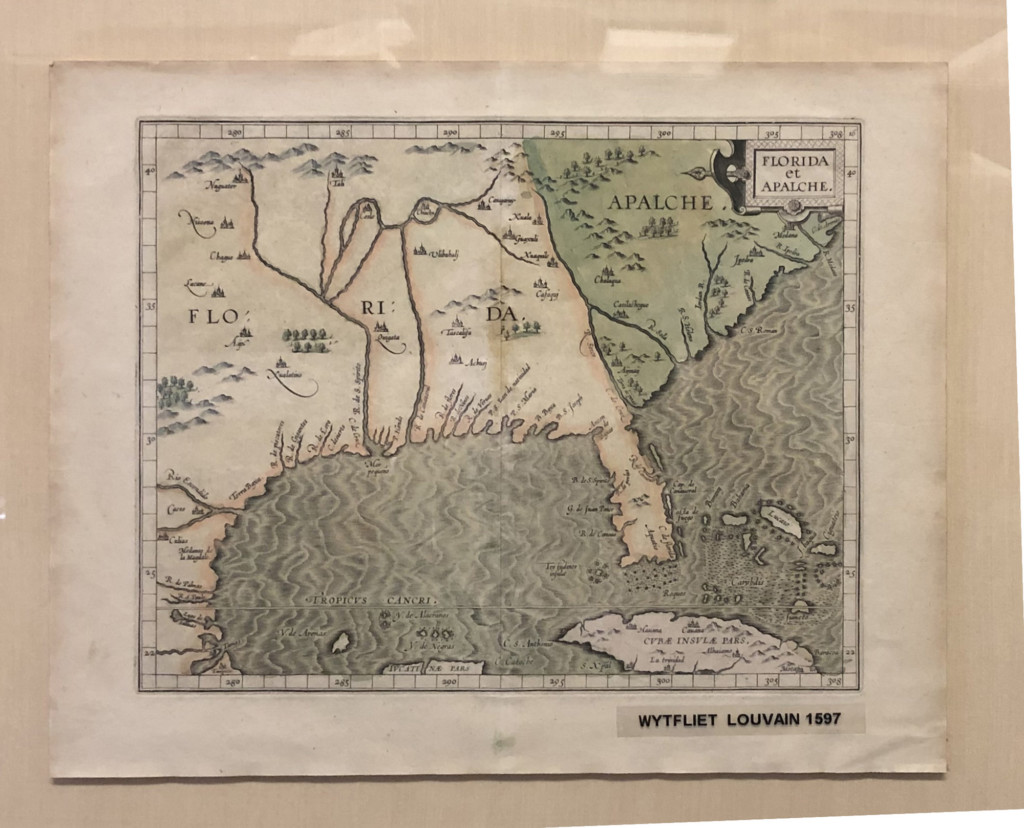 The Cognetta collection includes geographer Corneille Wytfliet’s “Florida et Apalche” map of 1597. Note the representation of Florida extending well to the north. The doctor’s love of the state inspired his collection. “I just started collecting these 25 years ago,” he says. “All of a sudden, it became a pretty big collection.” Courtesy of Cognetta collection’s curator, Angie Barry

“That’s as straight to the core as you can get,” Raimo says. “There’s no location anywhere that has as many (Florida) maps that are as rare all together in one place.”

Cognetta says he and his wife, Suzanne, aim to see the maps scattered about the state. They offer to loan batches of them to museums, universities and other institutions that would use them to educate and to preserve history.

Ave Maria University, near Naples, is game. The university’s Canizaro Exhibit Gallery is hosting into early December a Cognetta exhibition called “The Evolution of Florida’s Borders.”

The 21-map exhibition spans almost 400 years and includes a 1540 map of the Western Hemisphere — “the first to treat the hemisphere as a whole and depict the Americas as distinct north and south continents,” according to a news release from the Cognetta collection’s curator, Angie Barry. The exhibition also includes the work of artist, explorer and cartographer Jacques LeMoyne, the namesake of Tallahassee’s LeMoyne Art Foundation.

“There are so many ideas and collections that we can put together,” says Barry, also the curator of exhibitions and collections at the Gadsden Arts Center & Museum in Quincy. “It was fun to be able to go through his list of works and pull out smaller collections for the general public.”

Cognetta says his maps underscore the geopolitical implications of the Spanish, French and English in the territory-grabbing New World.

Along the way, boundaries changed, and details emerged or disappeared. Pointy bumps that denoted mountains on the oldest maps of Florida vanished once cartographers understood that those conspicuous features along Florida’s spine were merely sizable hills. 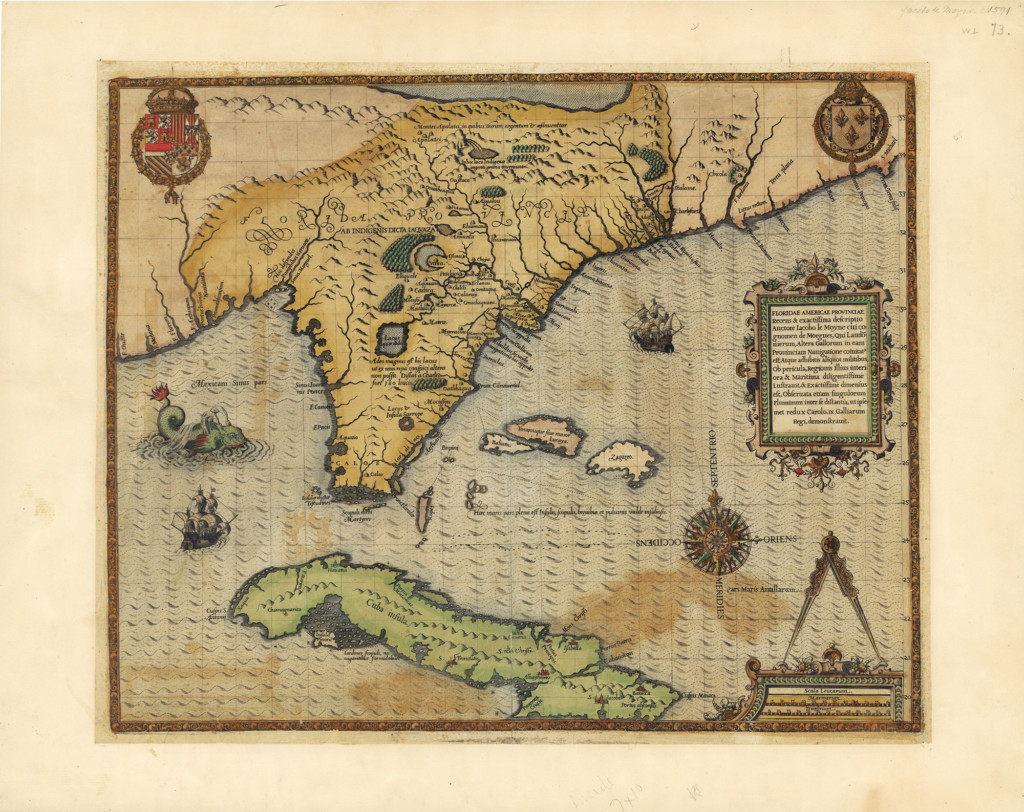 Dr. Cognetta’s collection also includes this 1591 LeMoyne map featuring Florida and Cuba. By the looks of the creature in the Gulf of Mexico, sailors had it rough back then. An Atlanta-based dealer says Cognetta has amassed the largest collection of Florida maps that exist in fewer than five copies. “Most of these maps are works of art,” Cognetta says. Courtesy of Library of Congress, Geography and Map Division

It all started in the 16th century when European explorers — using navigation, eyes and math — drew maps that defined political, economic and cultural boundaries and “played an essential role in the process of transforming North America into a new world populated by American Indians, Africans and Europeans,” according to Newberry Digital Collections for the Classroom.

“I think the history has to be preserved and appreciated,” Cognetta says, “and these maps do that better than anything I know.”

Cognetta says his collection has grown to 110 framed maps, plus many others. They include Florida’s Panhandle, including early depictions of Pensacola, Apalachicola and the Aucilla River.

A graduate of the University of Connecticut School of Medicine, Cognetta in 1979 landed a residency in family medicine at Tallahassee Memorial. He immediately fell in love with the people, history and topography of Florida, particularly the Panhandle, he says.

His map collection started in the mid-1990s when he sought a particular world map from the 17th century, said Raimo, the Atlanta-based dealer who would find that map for Cognetta and would advise him on many others.

Raimo says Cognetta then narrowed his scope to Florida. “He loved Florida, and that’s his home,” he said. “He never went into it to say, ‘I want the rarest maps.’ ”

But he has them.

A 1584 map, “La Florida,” seems to show a better understanding of the peninsula than the 1597 map that we likened to Pictionary. The northern part of the peninsula is wider, and the southern part rounds off, with well-defined dots depicting the Keys.

A 1591 LeMoyne map of Florida features small mountains, the French fleur-de-lis and a menacing monster in the Gulf. 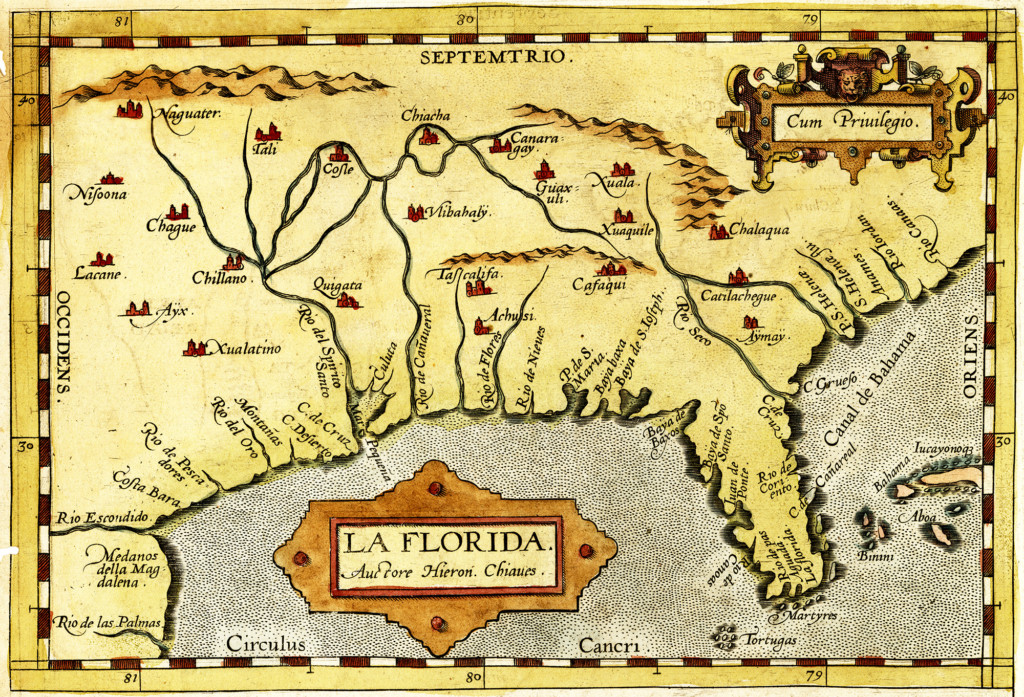 Another Cognetta map, “La Florida,” from 1584, seems to show a better understanding of Florida than the 1597 map. The northern part of the peninsula is wider, and the southern part rounds off, with well-defined dots depicting the Keys. Courtesy of State Archives of Florida/Ortelius

A 1720 map of North America, by London geographer Herman Moll, gives Florida the shape of India and refers to the massive water body to the east as “The Western Ocean.” To the north, in the region of “New France,” “Ilinese Lake or Michigan” appears in the proximity of today’s Lake Michigan.

And an 1820 map of Florida’s Panhandle shows Apalachicola as “West Point.”

Armand and Suzanne Cognetta “are very committed map collectors,” said Peter Cowdrey, educator in residence at the Museum of Florida History. Their collection features “maps specifically recommended to them by well-known specialists in the field, and they have gone after them with a committed passion that gives them a collection of a cartographic history of Florida.”

Cognetta says he’s fascinated with the information that the maps revealed and with the difficulty and risk that went into making them.

The first mapmakers relied only on the painstaking process of triangulation, which involves a series of measurements from three locations in triangle formation.

Cognetta and others marvel at the relative accuracy of even the earliest maps and how they gradually improved. He says that if GPS fails, you can still navigate with nautical charts from the 1850s.

His practice as an avid sailor gives him a natural connection to maps. His work as a dermatologist and surgeon who specializes in skin cancer detection and treatment provides a daily link.

Cognetta trains physicians to become board-certified in Mohs surgery, which involves removal of tissue, mapping of the tissue and reconstructive surgery.

To underscore the parallel, he keeps maps of Florida on display throughout his Tallahassee office. Patients seem to enjoy them, he says.

“Most of these maps are works of art,” he says of his collection. “The undulating curved shape of Florida is particularly beautiful to me.” 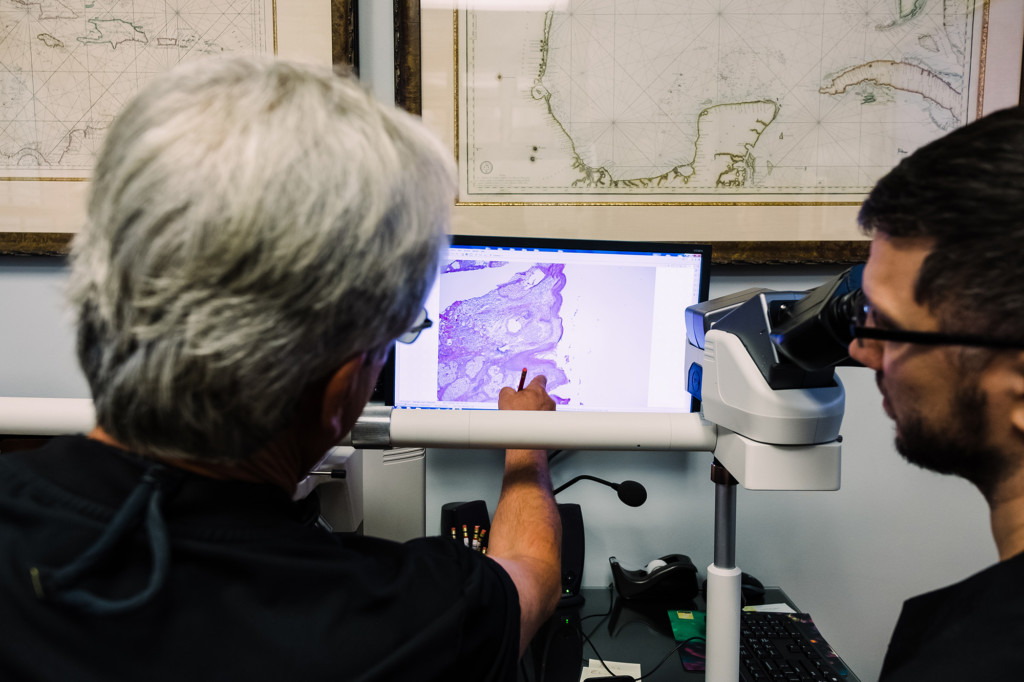 Mohs micrographic surgery is the usual first choice for treating high-risk squamous cell and basal cell skin cancers (and sometimes melanoma) because it offers the best chance of a cure and the best possible cosmetic result.

The surgeon removes the tumor, along with a small margin of apparently normal skin. The surgeon also draws a map of the area and the excised piece.

The specimen is transferred to slides in such a way that the surgeon can evaluate the entire underside of the specimen.

The idea is to make sure that all of the cancer has been removed. If any part of the tumor remains, the surgeon marks its location on the map.

With the map as a reference, the surgeon removes the remaining cancer. The technician prepares new slides for the surgeon to check, this time with tissue taken only from the cancerous area.

In this manner, the surgeon continues removing the tumor, following it wherever it goes, until the margins show no cancer cells.

Each stage involves waiting for the surgeon to indicate an “all clear.” — Condensed from the Harvard Medical School web site