A Splash of Zany 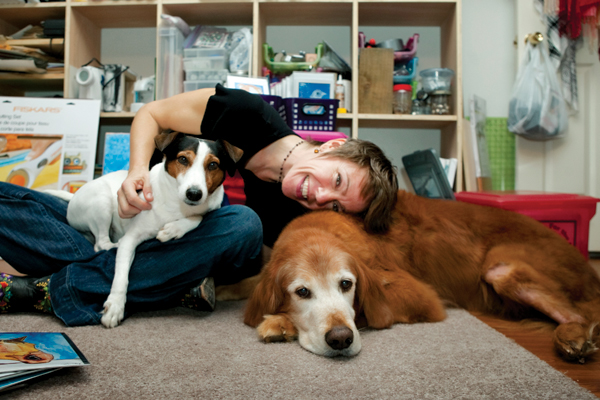 Maney takes a break with the two puppy mill dogs she rescued, Binky and 12-year-old Biscuit. She captured them in artwork she has pinned up in her studio. “I think about my dogs as love,” she says.

You’ve probably never seen a chartreuse dog — unless you’ve spotted one in a Pattie Maney painting — and wow, that green pup pops against the azalea-pink background. Or maybe you’ve seen

Pattie’s blue-nosed boxer or a rainbow-colored rooster hanging on a wall.

Her boyfriend points out her last name is pronounced, may-nee, like maniac, and yes, there is a little Van Gogh mania in her work. 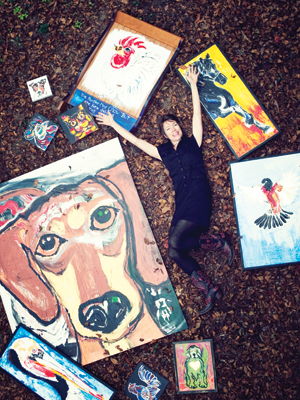 “Energetic, free, exciting — I love Pattie’s paintings of birds,” says Ann Kozeliski, executive director of the LeMoyne Center for the Visual Arts. “She’s as free as a bird when she paints them. It’s exciting when all that energy is transferred into artwork.”

A bright palette, bold strokes and thick acrylics combine for an unforgettable contemporary style. Those primary colors are a conscious choice. “I need happy in my life,” she says.

While living in San Francisco, she learned it was much easier for galleries to give up precious space for paintings rather than space-hogging sculptures, so she gravitated to acrylics.

In high school she was one of those people who didn’t fit in. During a difficult period as a teen, art became her escape. Early on, she gravitated toward painting animals rather than people. She rescued an abused pit bull and drew him over and over. “That dog,” Pattie proclaims, “gave me something to live for.”

Her soft spot for any creature experiencing pain is evident in how she lives her life. The former nonprofit worker has lent her talents to local organizations to help them meet fundraising goals. She has held countless benefits for charities, including Tallahassee’s Animal Service Center, Big Dog Rescue, Katrina survivors, Big Bend Hospice and Guardian ad Litem.

Two pieces of her art are now in place at the Tallahassee Memorial Cancer Center. One is dedicated to her father, Robert Maney, who passed away from the disease. “My dad was a lover of animals and one of the great influences in my life,” she says. “I am blessed to have a family that has always been supportive and loving, and I feel lucky to be here in Tallahassee with them.”

Businesses and restaurants all over Tallahassee have Pattie’s work on their walls. It can be found — and purchased — at Paws, Simply Entertaining, A La Provence and Naturally Healthy Pets in Northeast Tallahassee. In the Midtown area, check out Kool Beanz, Way Out West and the Tallahassee Memorial Hospital Gift Shop. Her art is also in LeMoyne Gift Shop, Gadsden Art Center and Tupelo’s Bakery in Monticello. 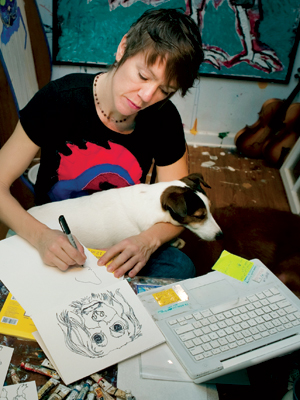 Besides earning the nickname “The Dog Lady,” Pattie is also known as “That Kool Beanz Artist.” She is proud of both associations. “Keith Baxter — the owner of Kool Beanz — has always been an amazing supporter of my art,” she says. (In the spring, she’s also known as “The Tomato Lady,” when she travels around town selling homegrown heirloom tomatoes. But that’s another story.)

The collaboration between the two took off in 2005. For some time, she and Baxter had discussed the possibility of placing her art in the popular restaurant located at 921 Thomasville Road, but they hadn’t ironed out the details.

When Hurricane Katrina hit, Pattie felt compelled to reach out. She became especially concerned about the fate of lost and abandoned pets in the days following the storm.

In typical Maney style, she found a way to combine her many passions and business in her solution. Kool Beanz hung her art and benefited from having eye-catching conversation starters on its walls. And for two years, half of all profits from sales of Pattie’s canvases hung at the restaurant went to help the many animals affected by Katrina.

To this day Baxter has never taken a penny’s commission from the sale of Pattie’s art. “He always instead allowed commissions to go to nonprofits,” she says.

Shoppers in another area, the Market District in Northeast Tallahassee, are becoming familiar with Pattie Maney paintings. If you haven’t experienced Pattie yet, a new opportunity awaits.

Throughout April, the Market Square Art Walk will feature her works. My Favorite Things at 1410 Market St., A La Provence at 1415 Timberlane Road and Simply Entertaining at 1355 Market St. are a few of the establishments slated to host her art. Each weekend when weather permits, Pattie will set up on the sidewalks outside these storefronts. If the weather is uncooperative, she’ll set up inside.

The Market District Art Walk not only offers people a chance to see a variety of Pattie’s paintings, they also can acquire a custom piece created just for them in return for a donation. “People can bring their pets or photos of them on paper or phone, and I will create line drawings from them,” she says.

Every weekend she plans to contribute half of her proceeds from all prints and ornamentals to a different nonprofit: Last Hope Rescue and the Animal Shelter Foundation, the first week; Big Bend Hospice, second week; Tallahassee Memorial Hospital Foundation and their pet therapy program, the third; and the Alzheimer’s Project, the last. Those with a particular fondness for one of these charities can make sure to show up on that weekend. 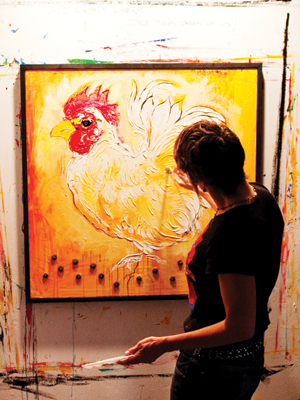 “I am very thankful to have these groups here in the Tallahassee area,” she says.

Maney is no stranger to the Market District. Last summer, her paintings were part of their Summer Art Show. “Pattie’s work is just fantastic,” says Lauren Teal of My Favorite Things. “From the colors to the size, everyone comments on her paintings.”

Events like this are “a win-win for the business and the artists,” says Sherry Kelly, who organizes promotions for the district.

Not sure how a particular work of art would fit into your décor? Not a problem. “A lot of times I can arrange for you to buy a painting, take it home and live with it for a week to see if you like it — then return it if it doesn’t work for you,” Pattie says.

As a former nonprofit worker, Pattie will probably always have her hand out to help those in need. But since art is her bread and butter, she also works tirelessly to find new audiences who will appreciate and buy her paintings.

Visit pattiemaney.com for more examples of Patties’s art, available as prints and on note cards as well as canvas.