Up with the Eagle

The deadly shots that rang out in the early-morning hours of March 6, 1865, have long since faded into the history books, but the Battle of Natural Bridge remains a legendary and revered incident in Tallahassee history. With each retelling over the years, and the passing of the original witnesses, the Civil War story became a campfire tale of “old men and boys” facing off against a mighty Union invader bent on destruction.

“Generations of Florida schoolchildren learned of the heroic march of the young cadets from the West Florida Seminary to join the Confederate defenders at Natural Bridge,” wrote historian Dale Cox in his 2010 book, “The Battle of Natural Bridge, Florida: The Confederate Defense of Tallahassee.” “Viewed through the prism of time, the size of the attacking Union force was magnified. The ranks of the Southern defenders shrank.”

The truth is, about 1,000 men on each side confronted each other in the early-morning hours that day, and the defenders weren’t all a last-minute collection of old men and boys. The fighting force consisted of local reserves, home guards, West Florida Seminary cadets, regular army infantry, cavalry and artillery, and even some local physicians. These men repulsed three brave charges made by two regiments of United States Colored Troops but were repulsed themselves when they attempted a counterattack. Shot, shells and bullets smacked into men, trees and breastworks. At the end of the day, though, the Union forces had gotten their fill of Southern artillery and retreated south to the protection of their gunboats off the St. Marks lighthouse.

The Southern victory saved Tallahassee from capture and prevented Fort Ward (in St. Marks) from being attacked from the rear. For the locals, it was a savory last hurrah. Tallahassee would remain the only Confederate capital east of the Mississippi River not to fall into Union hands, but that distinction would last for only two months. The war ended in April, and Union occupation troops arrived in Tallahassee in May.

This year, the 150th anniversary of the battle will be commemorated on March 8 when a crowning portion of the Natural Bridge battlefield monument — the eagle — is dedicated during a ceremony hosted by the United Daughters of the Confederacy. 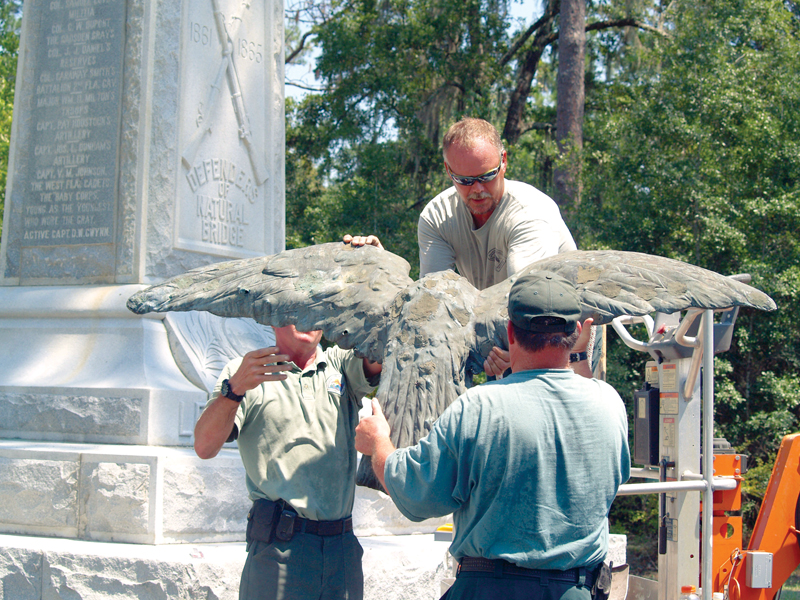 If the eagle looks shiny and new, that’s because it’s really a bronze replica of the original, which underwent restoration and preservation at the Florida Department of State’s Archaeology and Conservation Lab, located in the Museum of Florida History. The original eagle was made of copper plates in a fashion similar to how the Statue of Liberty was built, according to Buzz Gifford, president of the Natural Bridge Historical Society. That makes it an especially precious historical artifact.

“There are only three other known sculptures of this type in the United States of that era,” Gifford said.

To construct the replica, a three-dimensional image of the original eagle was scanned and a mold patterned from that image. Once cast, the replica was installed at the top of the monument in January and will be dedicated during the 150th anniversary reenactment on March 8. The cost of the “eagle project” is valued at $30,000, Gifford said. The Florida Park Service contributed the lion’s share of that amount, while the Natural Bridge Historical Society donated $7,500 and the United Daughters of the Confederacy gave $1,200.

The eagle isn’t the only monumental item making an appearance for the 150th anniversary, Gifford said. A 40-foot-long wall of honor, sponsored by the Sons of Confederate Veterans, is slated for display as well. The wall lists the names of some 5,000 Confederate soldiers from Florida who died during the war. At the Battle of Natural Bridge and other actions leading up to it, the Confederates lost 11 killed (six soldiers and five civilians), 39 wounded and two captured.

The eagle and the traveling wall are just two of the more notable features of this year’s reenactment. Gifford said that 100 more soldiers are expected to be on hand for the battle reenactment this week, bringing the total number of living-history presenters (military and civilian) to around 350. On Sutler Row there will be more vendors and shops, and a family band of period-correct musicians will entertain throughout the weekend. In addition, the John G. Riley Center and Museum of African American History and Culture will be on hand to talk about the deeds and sacrifices of the two African-American U.S. regiments that were in the vanguard of the attack. The 2nd Infantry Regiment United States Colored Troops, a living-history association, will present its perspective of the battle. Both the 2nd and the 99th United States Colored Troops suffered heavy casualties during the fighting. Total Union losses amounted to 22 killed, 109 wounded and 38 missing.

Natural Bridge Battlefield Historic State Park is a peaceful, green and shady place through which the St. Marks River flows on its way to the Gulf of Mexico. The “natural bridge” itself is a narrow strip of land formed where the river goes underground for several yards and then reemerges. 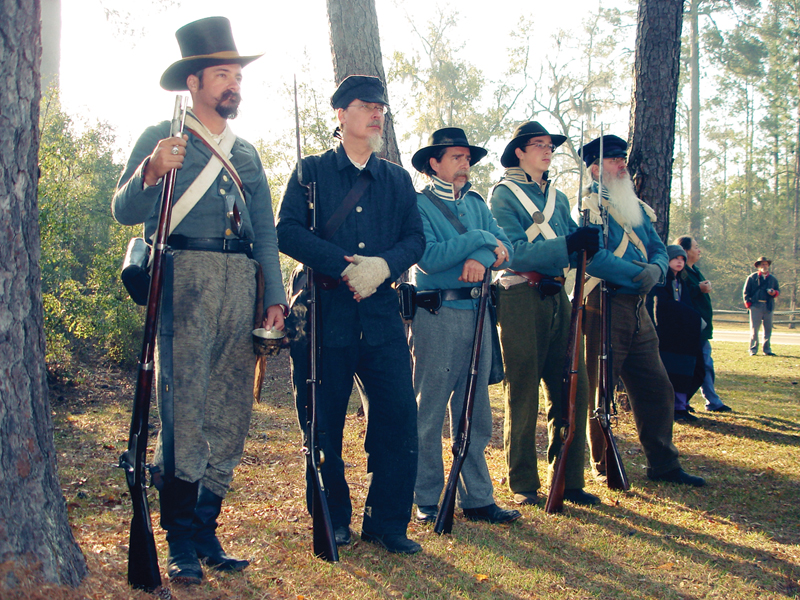 This year’s reenactment of the Battle of Natural Bridge is expected to attract more than 100 additional “soldiers” and other living history participants as part of the battle’s 150th anniversary.

It’s something that casual visitors unfamiliar with the terrain — or the history — wouldn’t notice right away. But on this unassuming geologic feature the entire battle would turn. It was the only location where Union forces (driving north on the east side of the St. Marks River) could cross the river in their attempt to attack Fort Ward in St. Marks or threaten Tallahassee. Confederates had denied them the use of the Newport bridge in an earlier skirmish. At the natural bridge, a semicircle of artillery commanded the approach to the bridge and riflemen were dug in behind mounds of dirt. A weeklong archaeological survey conducted in 2009 turned up artifacts that indicated the bridge and adjacent areas were, indeed, a kill zone of shot and shells. One hundred or more metal finds were discovered, including a canteen chain found on the Union side of the river. (Many other artifacts were doubtlessly taken off the field as souvenirs in the decades after the war.)

“We found numerous spent Minié balls and a number of dropped Minié balls that had not been fired, which in the confusion of battle is going to happen quite often,” Gifford said. “There were some unique ones that were made specifically for the Confederacy that were found, and some unique ones that were cleaning rounds and various rounds from the Union. There were also fragments of exploded spherical case shot, and a fair amount of grapeshot was found.”

Survey teams recorded the location of every object, and this information was used to create a map. Natural Bridge Historical Society Secretary/Treasurer Bob Trapp said it’s clear from the map that the action was focused primarily at the bridge, although a lot of fighting happened on the adjacent land formerly owned by the Rakestraw family.

“There’s one mound near the Rakestraw property that we concluded was spoil dirt from the canal (built in the 1830s) where we found a bunch of stuff, and we concluded somebody was hiding behind that mound,” Trapp said.

The “stuff” in question happened to be bullets. Lots of bullets, Gifford said.

“The Union was behind that mound, and there were tons of Confederate Minié balls in that mound, plus grapeshot,” he said.