A Local Couple Discovers a Bomb in Their Backyard

Discovery Leads to Their Historical Search for Dale Mabry Field 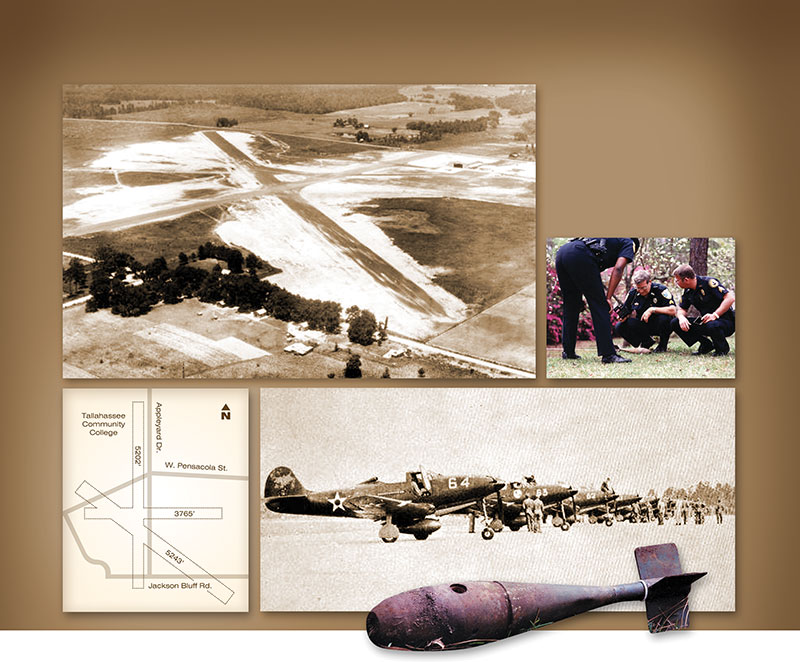 The saga of Dale Mabry Field isn’t found in a museum, but in our backyards. Clockwise from left: A 1938 view of the airfield, looking northwest with Jackson Bluff Road in the foreground; Officers examine the bomb found in Richard and Lois Decoteau’s yard; P-39 Airacobras line up in a photo taken during World War II; Map showing the location of the three paved runways in relation to current-day roads.

It wasn’t your typical moving-in experience. Oh, sure, there was the usual unpacking of boxes and the excitement of settling into new surroundings.

But Richard and Lois Decoteau didn’t count on the huge rat snake under the house. OK, well, maybe the snake. It’s kind of woodsy on Rankin Avenue, just north of the Tallahassee Museum of History and Natural Science. One might think it strange not to find a snake.

But the aerial bomb under the bushes a foot from the house was something else entirely.

“It’s not every day you have a bomb extracted from your yard,” says Richard Decoteau, a retired Honeywell supervisor from Massachusetts and ham radio hobbyist. “It kind of drove us rapidly to find out what the heck is going on.”

Lois Decoteau, also an amateur radio hobbyist, tells the story like this: It was March 1990, and spring was in the air. The weather was warm, the flowers and trees were blooming, and the fragrance of it all “added to the joy of our newly acquired home.”

“It was quite invigorating to be outside in the clean air, raking up leaves and pine straw,” Lois Decoteau wrote in a memoir of the events detailing their adventure with the bomb.

Richard Decoteau and oldest son John had started out early raking leaves, and after about an hour John found something under the bushes on the south end of the house. It was an old black helmet, but it wasn’t the only object tucked away in the shadows. Nearby was a tube-like object with what appeared to be the fins of an old-fashioned aerial bomb. It was stuck in the dirt a little more than a foot away from the house.

Naturally, the Decoteaus called the authorities. A police officer came out, took a look and called his sergeant.

The sergeant came — and called his supervisor.

The supervisor came — and called the bomb squad. The bomb squad took the suspicious object away for disposal.

The Decoteaus never found out if the object was real or just a practice bomb. But Richard Decoteau said one of the officers mentioned that it might have been a leftover from the days when Dale Mabry Field was an active training base.

As it turns out, the Decoteau home is situated along what would have been one of the old airstrip’s runways. Richard speculates the bomb may have fallen off a plane as it came in for a landing. The house was built after the fact — posing another mystery that remains unsolved.

“I don’t see how it’s possible they could have built the house with all the contractors, the brickwork and everything else, without having seen it or disturbed (the bomb),” Richard Decoteau says. “That is a mystery to me.”

For a family with a love of history, the idea that their home was located on the remnants of an old airfield was magic to the Decoteaus. They began searching for more information and tracked down the story using a variety of scattered sources and firsthand accounts. Now they want to share what they’ve collected.

“Lois and I feel a great commitment to carry on this information so it doesn’t get lost,” Richard Decoteau says.

In 1928, the city bought 200 acres of land on a site roughly four miles northeast of the present Tallahassee Regional Airport that today is home to Tallahassee Community College. Richard Decoteau says the site was picked by Hugh Mays and two other men who were directed by the Tallahassee Chamber of Commerce Aviation Committee to set up the town’s first airport. The Decoteaus learned that Mays was a state aviation inspector, commander of the Leon County National Guard, and had flown with World War I fighter ace Eddie Rickenbacker. Ivan Munroe was the airport’s first manager.

In November 1929, the fledgling airfield was dedicated and named after Capt. Dale Mabry, a Tallahassee native and son of Florida Supreme Court Chief Justice Milton Mabry.

Dale Mabry earned his place in aviation history the hard way. After surviving the dogfights of the First World War, he stayed in the Army but was killed in 1922 when the hydrogen-filled dirigible he was in crashed in Virginia. He was 30 years old, and 33 other men died with him. Twelve men survived. It was the worst aviation disaster of its day.

During the Great Depression, Dale Mabry Field received some improvements to fill the increased demand on flying. The runways were built during the Work Projects Administration — a put-people-to-work program akin to today’s “stimulus” package.

A single hangar occupied the northwest corner of the field, but there was no refueling station on hand, according to the Decoteaus.

“So in order for incoming pilots to be refueled, they had to fly low over Tallahassee to signal the need to send a fuel truck,” Lois Decoteau wrote. “I can only imagine some maneuvers pilots did, since there was very little enforcement of the rules.”

By the late 1930s, Dale Mabry Field was starting to come into its own. Commercial flights arrived, thanks to Eastern Air Lines and National Airlines. Eddie Rickenbacker himself, then president of Eastern Air Lines, flew into town to help mark the occasion.

The Army came to Dale Mabry Field around 1940, and immediately set about improving the airfield and its environs. A rail line was added, and nearby swamps were drained. Despite the military presence, all commercial flights still had landing priority, and Army pilots running low on fuel had to circle around waiting for their chance to land.

As the war in Europe cranked into high gear, the War Department at home sprang into action to defend the nation. More bases like Dale Mabry Field had to be built for the monumental training programs that might be needed in case the United States got involved in the war. By August of 1940, the city had leased the airfield to the federal government for 20 years for an annual fee of $1.

The airfield officially became an Army base on Jan. 24, 1941, and its first commander was Col. Jacob Wuest, a former commandant of the Army’s Air Corps Tactical School. His secretary was Tallahassee resident Alice Smith Ragsdale, who passed away only recently. The Decoteaus recall interviewing Ragsdale about her experiences working on the base.

“We found out quite a bit about the field and some of the things she did, the activities, and found it totally fascinating,” Richard Decoteau says.

Evidently, Wuest was very protective of the young lady, who was only 17 or 18 at the time. She told the Decoteaus he gave her dating advice and generally helped keep the wolves at bay, so to speak. With an air base filled with cocky young pilots, it was a full-time job.

“He even had his desk put in front of hers so that the GIs would have to go through him to see her,” Richard Decoteau says. “Every time she’d go to USO dances, he’d usually be there and keep a close eye on her.”

In 2001, Ragsdale spoke of her experiences during the dedication of a historical marker located near Tallahassee Community College.

“It was a truly marvelous learning experience,” she said. “Col. Wuest was such a fine man; he took care of all the small details on the base. He handled his officers real well, and even though he could be real strict with them he was very patient and kind to me.

“(The colonel’s wife) would send beautiful flowers, and I would have a good time arranging them in our office,” Ragsdale recalled. “My first job for him was coloring maps and then compiling all the information, which I gave to the officers when they first came on the base.”

Retired Army pilot and Tallahassee resident Nick Fallier was another primary source of information on Dale Mabry Field. He helped engineer the layout of the airfield and described how the airfield was camouflaged against enemy flights.

“We went for tours of the former Dale Mabry area, and he pointed out to us where the guard shack was,” Lois Decoteau base says. “The guard shack possibly may have been the old building at the corner of Jackson Bluff and Mabry.”

Fallier also regaled the Decoteaus with flying tales and close calls on the ground.

“He said that while in the process of surveying the runways, someone was test firing from a plane and almost hit his head,” Lois says. “After he heard the (noise), he turned around and looked for the spent shell that almost did him in. He has it in his military collection.”

The base was self-sufficient and featured barracks, officers’ quarters, a grocery store, a mess hall, a hospital, a bowling alley and a church. Overhead, various fighters could be seen buzzing around the Capital City. These included the venerable P-47 Thunderbolt, the legendary P-40 Warhawk, the sporty P-39 Airacobra, and later the P-51 Mustang — perhaps the best fighter of the war. They practiced their deadly craft at a gunnery base at Alligator Point and a bombing range in Sopchoppy. There were auxiliary airfields in parts of Georgia and as far south as Dunnellon, west of Ocala. By 1944, the post’s population had reached 1,300 officers, 3,000 enlisted men and 800 civilian employees. More than 8,000 pilots trained there, and at least 12 died during training.

Among the units that used Dale Mabry Field were the 53rd Pursuit Group from Tampa and the famous 99th Fighter Squadron — better known as the Tuskegee Airmen. Chinese and French pilots also trained there.

In their research, the Decoteaus discovered that the “bomb” they found planted by their house wasn’t the only piece of ordnance to go astray. In the fall of 1942, mechanics working on a P-39 accidentally fired the plane’s powerful 37-millimeter cannon, which ripped up the hangar. In another incident, the Florida Supreme Court building took a .50-caliber round when a P-47 pilot unintentionally fired his guns toward Tallahassee.

Richard Decoteau says more Tallahassee residents should know about this bit of local history. He sets up an information booth at AirFest, Tallahassee’s local air show, to promote the need to preserve this heritage.

“I think people ought to be tremendously proud and would want to know as much as they can about this because it was a wonderful thing the people did for the war effort,” Decoteau says. “It also was one of the main things that helped stabilize the economy and the people during the Depression.”

Of course, Dale Mabry Field wasn’t the only military base in Northwest Florida during the war. Perhaps the biggest base was Camp Gordon Johnston, located in Carrabelle. A small museum is dedicated to that camp and its role in training soldiers for waterborne invasions.

“It would be a fine thing to honor (Dale Mabry Field) with a museum of our own,” Lois Decoteau says.

Richard and Lois Decoteau welcome more information about Dale Mabry Field. They can be reached at (850) 364-0251.