For DeVoe Moore, an epic story of Florida’s development inspired admiration of pioneers

I have known DeVoe Moore a little bit for years.

I know that he has a thing for Case knives and Steinway pianos in addition to classic rides, and I have witnessed his uncanny ability to find instantly a particular document among the countless papers that populate his office at the Tallahassee Automobile and Collectibles Museum. I once interviewed Mr. Moore and his assistant of 50-plus years, Amos Dickey, about their extraordinary relationship.

Meanwhile, I have divulged little about myself to DeVoe, who is given to directing remarks at me such as “I don’t know if you’re a socialist or not.” I would just as soon keep things that way.

When last we spoke, DeVoe impressed upon me his desire to have me read his favorite book, A Land Remembered, an epic novel of Florida history written by Patrick D. Smith and first published in 1984.

“You start it, you won’t be able to put it down,” DeVoe assured me.

Thus encouraged, I reported to the nearest taxpayer-supported public library and checked out the book, about whose protagonist, Tobias MacIvey, DeVoe had said, “I wish I had been a man like him.” The novel, spanning 105 years that begin with the Civil War era, follows the lives of three generations in the MacIvey family. Tobias, his son Zech and his grandson Solomon are all indefatigable men whose enterprising efforts repeatedly triumph over setbacks.

As the novel begins, Tobias has been in Florida for five years. He departed Georgia and a failing red-clay farm in a horse-drawn wagon with his wife and infant son, intent upon separating himself from the coming war. His possessions are few: a sack of corn and one of sweet potatoes, a few packets of seeds, a shotgun and a few shells, a frying pan, pewter dishes and forks, a cast-iron pot and sufficient hand tools to build a shelter.

Upon his arrival in Florida, Tobias trades his two horses for two oxen and a dairy cow. The cow survives but briefly at the MacIvey homestead before panthers get it. Meagerly outfitted, the family subsists largely on raccoon meat and swamp cabbage. Tobias wants badly for a horse and dog with which to round up wild cattle and start a herd.

He catches a big break when kindnesses he extends to three Seminole Indians, who had returned to Florida after being banished to Oklahoma at the conclusion of the Second Seminole War, are generously returned. When Tobias encounters them, they are being pursued by three white men who are hell-bent on exacting revenge because the Indians have killed a calf.

Tobias intervenes when the white men begin siccing dogs on the Indians and lashing them with whips. He dispatches one of the dogs with his musket, and the white men retreat but promise to return.

While he has little to eat, Tobias welcomes the Indians into his home, feeds them wild hog and greens and invites them to spend the night. One, named Keith Tiger, praises Tobias — “I know of no other white man who would have risked what you did for an Indian” — and assures him that he will not forget him. 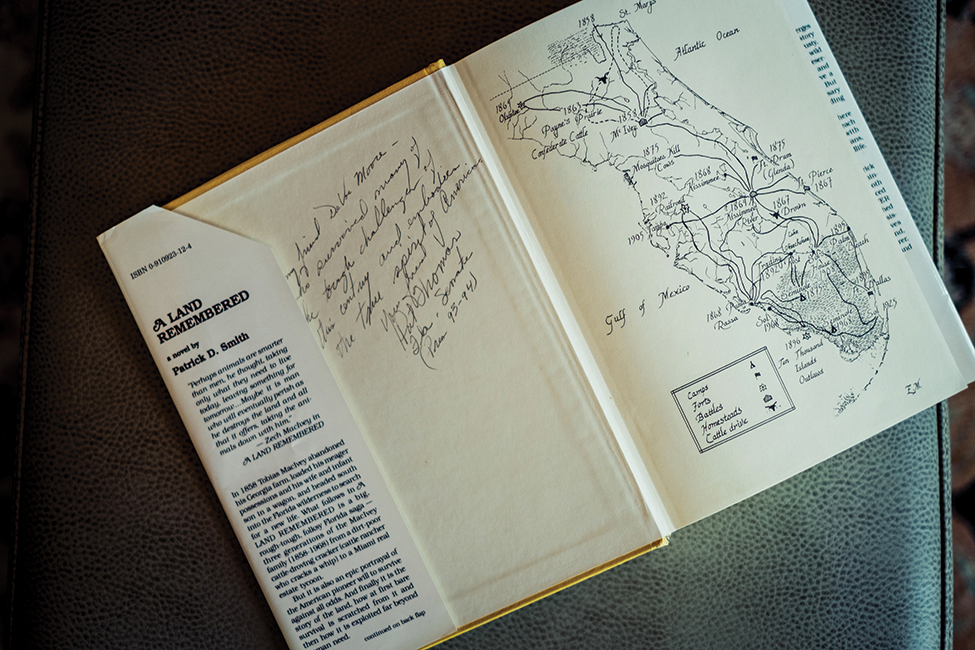 Some time later, Tobias and Zech discover a horse in their pen and two wolf-like dogs tied to a fence. The horse is a marshtackie, a type left behind the Spanish — small, quick and valued for its ability to herd cattle. Courtesy of the Seminoles, Tobias has effectively been presented with the means of production. The horse and dogs will enable him to assemble a herd and lead it through pasturelands, fattening the animals on their way to market.

Critics of the novel find the interaction between Tobias and the Seminoles to be implausible and likewise his friendship with a black man named Skillit who had buried himself in a nest of palmettos where he was sniffed out by the dogs. But those relationships are central to the books and serve as clues to Tobias’s character.

Skillit becomes the first employee of the MacIvey Cattle Company and is later joined by two wiry ne’er-do-wells who prove capable of sobering up long enough to help drive cattle from the Kissimmee River to Punta Rassa.

Success does not come easily. Tobias loses cows that disappear in a sinkhole and that succumb to gators. Wolves threaten the herd. But the first successful drive leads to others, and as Tobias’s bond with Skillit strengthens and endures, I could not help but consider the parallels with Mr. Moore and Mr. Dickey.

Decades later, Tobias’s grandson, Solomon, establishes himself as a vegetable grower in Okeechobee on land that multiplies in value as the Flagler Railroad advances southward and dredges come to dot Biscayne Bay. The advent of the MacIvey Real Estate and Development Company is inevitable. And the developer, as often happens, becomes a banker.

As his life nears its end, Solomon retreats to the cabin he had known as a boy, confronts regrets and anticipates a day of reckoning, given his role in all that “we’ve done to the Lord’s property.” Years earlier, he had assailed the members of an economic council at a dinner held in his honor: “With you, it’s greed. More is better, bigger is better. Well, you bastards are too stupid to know there soon won’t be no more.”

I am not sure what Mr. Moore the developer made of that speech. Next time I see him, I’ll ask him. But I have heard him say, “I am so grateful that I came through this world when I did. It won’t ever be the same.”

This is the first in a series of articles on the favorite books of familiar Tallahassee residents.