As the sun began to dip down below the horizon, its last bit of light glimmered upon the pig-grease-covered athletes who stood naked among thousands of Greek spectators. The athletes had come from all directions to show their strength, skill and instinct in the ancient art of pankration. Winners would be considered Kings of the Olympics, while the losers would leave — bloodied, broken, sometimes even giving their lives for the sport.

Beginning as far back as 648 B.C., pankration quickly became the dominant sport of ancient Greece. The combination of bare-knuckle boxing and wrestling made the sport the most exciting of all the events. It was the mix of different styles that gave fighters the unique chance to change and adapt the sport to their liking over time. Two and a half centuries later, the action and excitement (without pig grease and with clothes) lives on in a new format and under a different name: mixed martial arts.

Mixed martial arts, or MMA, has become one of the fastest-growing combat sports in recent history. Viewers worldwide have begun watching and even participating in the sport, and Tallahasseeans are no exception. Spectators pack televised Ultimate Fighting Championship (UFC) events at sports bars across town.

Unlike the early Greek competitions, MMA draws on fighting styles from around the world, forming a distinctive new sport that encompasses the knowledge of thousands of years of combat technique. Many different fighting styles — including Brazilian Jiu-Jitsu, boxing, wrestling, judo, Muay Thai, kickboxing and karate — are represented, utilizing key techniques from each style. 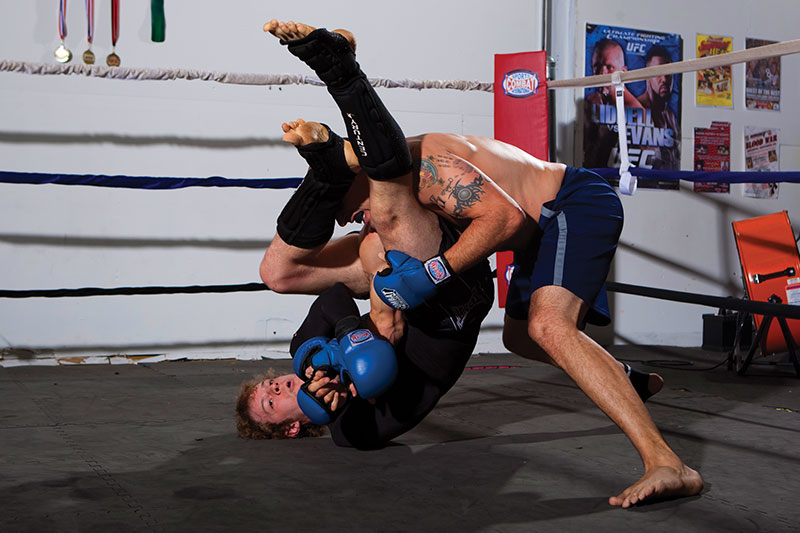 Originally a bare-knuckle, no-holds-barred competition with little or no rules, the UFC was an exciting change from other popular combat sports such as boxing or karate. It offered viewers a faster-paced sport that incorporated diverse forms of fighting not commonly used together in most mainstream events.

However, the UFC didn’t gain instant approval from everyone in its early days. U.S. Sen. John McCain, after watching the first UFC event, referred to the sport as “human cockfighting.” He immediately campaigned against the tournaments, encouraging the governors of all 50 states to ban them. Such strong opposition led to the event getting dropped from most major pay-per-view providers. The event had been mostly reduced to DirecTV PPV, which had much smaller audiences than the more popular cable companies. By 1997, 36 states had passed laws banning what was known as no-holds-barred fighting, a name used to describe MMA.

Rules began changing as the sport aspired to more mainstream acceptance. Weight classes were introduced, creating a more even playing field on the mat. Gloves were brought in to protect the fighters during events, and five-minute rounds were soon applied to all fights. Practices once permissible — such as hair pulling, head butting, groin strikes and kicks to downed opponents — were banned. As the UFC began presenting itself as a more legitimate fighting sport, another MMA fighting league, the International Fighting Championship, or IFC, grabbed the first U.S.-sanctioned mixed martial arts event in the history of the sport. Only two months later, the UFC put on its first sanctioned event.

Many other leagues have been created since, but most MMA enthusiasts agree that the UFC is indeed the NFL of mixed martial arts. Only the best and most accomplished fighters gain a chance to fight in the official UFC octagon.

The sport relies on three major aspects of fighting: standing battle, takedowns and submission holds. Muay Thai, kickboxing and karate, for example, are used for the standing combat side of the sport. Kicking, punching, elbowing and footwork can all be attributed to these forms. Brazilian Jiu-Jitsu, as well as judo and wrestling, are used to give fighters an advantage with takedowns and submissions.

So what is it about MMA that has drawn so many people so quickly to the sport?

In boxing, fighters often punch it out for 12 full rounds, ending in a judge’s decision. But MMA fights keep viewers on their toes, usually ending in bloody knockouts or an inescapable submission hold. Though the giant, gold-plated belt also exists here, there is no need for the manufactured drama of pro-wrestling. MMA offers real people fighting in real matches.

With the explosion of MMA fever, pay-per-view sales have grown steadily over the past few years. Even with a price tag of $40 to $50, the UFC has no problem drawing in millions per fight, and those figures don’t count the thousands of fans who tune in at sports bars across the nation. In Tallahassee, fans can watch the match in good company for around $5 at most of the sports bars in town.

As the UFC grows in popularity, viewers have started to become fighters, with studios and schools popping up all over the country. Locally, Tallahassee MMA was formed to serve fighters in the area who wanted to break into the sport.

“When I moved to Tallahassee in 2002, there was no place that was really doing MMA on a full-time basis,” says Brian Orkin, co-founder of Tallahassee MMA. “You could kickbox or do Muay Thai, but nobody was incorporating or teaching MMA as one integrated system, which is what MMA is — an integrated fighting system.”

In 2002, Orkin collaborated with new friend and fighter Harrison Pfeiffer to form Tallahassee Fight Club, which gave people a place to train in the various techniques of MMA. As the sport became more popular due to the UFC, the fight club became increasingly more popular.

“We didn’t advertise and we weren’t open to the public,” Orkin says. “We just trained there, and then it grew organically without much effort on our part.”

As Tallahassee Fight Club continued to grow, Pfeiffer and Orkin decided that they needed to run things the right way.

“It was starting to spiral out of control, and you need to watch something like that closely,” Orkin says. “To do it right would take moving out to a full-time facility and treating it as a full-time school, having actual instructors that train, running a program, and teaching people.”

In 2006, Orkin and Pfeiffer opened Tallahassee MMA, a full-time training facility. Students began pouring in as the popularity of the UFC exploded on television. Of course, as with any fad, many students thought they could be top-notch fighters but found that things aren’t always as easy as they appear on television.

“We have 14-year-old high school kids and we have 50-year-old doctors, with every size and shape in between. It’s MMA for the masses,” Orkin says.

Students arrive from all walks of life with diverse reasons for getting into the sport. Some are ex-athletes who want a new, competitive way to get in shape. Others may be talented in one martial art discipline but grow tired of the rigid situation-based techniques often associated with ancient fighting styles. MMA training gives martial arts students the opportunity to be individuals rather than carbon copies of the same fighter.

Tallahassee MMA now operates seven days a week, with multiple classes and a competitive fight team. It also has added Josh Odom as an instructor and fight team member. Odom brings skills from his training under UFC Hall of Fame fighter Ken Shamrock. Odom and other team members have competed around the country.

“It’s a martial art, ‘art’ really being the active word,” says Pfeiffer, an instructor and sponsored martial arts athlete at the 1988 Olympic Games in Korea. “So it’s an expression of yourself — and you can’t teach me how to express myself. You can show me certain ways, certain principles that hold true, but the way that I fight is not going to be the way you fight, even if we are training under exactly the same system or style. Because we don’t have the same mentality, we don’t have the same physical limitations, strengths and weaknesses.

“What mixed martial arts really allows you to do is fully express yourself,” Pfeiffer says.