40 Years of Art, Artifacts and Animals

In January, the Tallahassee Museum of History and Natural Science began its 40th year as a member of the Tallahassee family. Beginning in 1958, the museum has endeavored to bring history, artwork and animals to Tallahasseeans of all ages. Heralded for its one-of-a-kind atmosphere, the museum is a prime example of Tallahassee’s commitment to community preservation.

The yearlong celebration ran the gamut from tradition to bats. This spring, the museum offered an exhibition of artifacts that span the four decades of its existence. “The Museum’s History as Reflected Through Collections” gave visitors a chance to see what children 40 years ago saw on display during a trip to the Tallahassee Junior Museum.

Later, the party continued with “Masters of the Night: The True Story of Bats.” Tallahassee was just one of four sites across the nation to feature this exhibit in 1997. In addition, the museum played host to several unusual bats as its “guest animals” while the exhibition was in place. 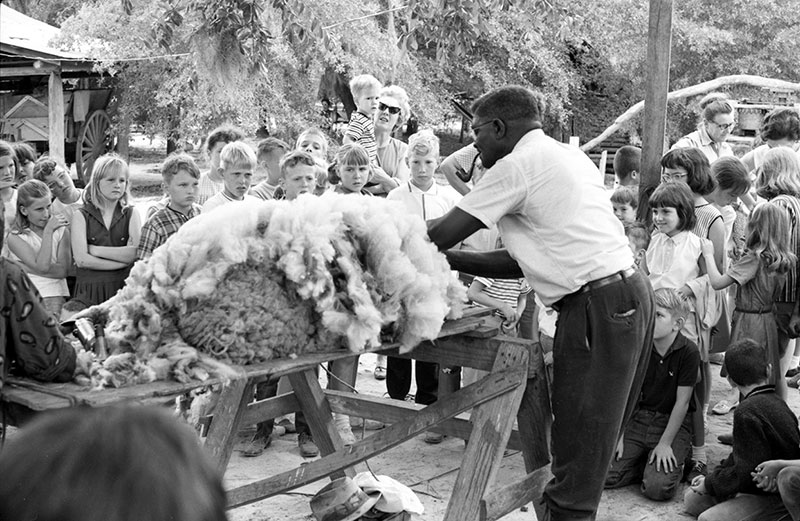 “We are creating a whole new generation of people who value the Big Bend heritage,” says Russell Daws, executive director. ‘‘The perception is that a museum is indoors and inanimate. We have a combination of living collections and living history. Our collection represents the region’s archaeological past.”

Although the official mission statement of the museum did not focus on local history exclusively until 1987, the museum has always accepted artifacts from the local area and had an abundance from which to choose when assembling the exhibition.

As one might expect, much has changed at the museum in the past 40 years. Remembering the beginning, some past staff members are recording their memories within “A History of the First Twenty Years of the Tallahassee Junior Museum,” due out later this fall.

“The museum is a community achievement,” says Helen Grissett, early board member, former Leon County schoolteacher and an editor of the book. “Without a written record, its beginnings will go into oblivion. The cooperation of the community must be preserved through this story.”

With four editors sifting through a generous amount of oral history, the book promises to be a solid record of how Tallahassee residents aligned their efforts to create a place for children to learn that worked in conjunction with the school system.

“The reason the thing (the museum) took off in the first place is that Tallahassee isn’t a typical little Southern town,” says Kay Nunez, an original founder of the museum who also is editing the book. “Outsiders remarked that the museum was a miracle.”

A dream of several members of the Tallahassee Junior League and the Leon County Association for Childhood Education, the idea for the museum began to take shape in 1956. With a small budget and large ideas, the founders had one common goal: make a place for children to come and learn about the world outside the boundaries of northern Florida. Everyone involved agreed that the museum would serve as a learning environment that would teach children in three dimensions while their textbooks could provide only a static, detached view of the world.

Life at the museum began in the McMillan House downtown, on the corner of Adams and Madison streets.

Opening in 1958, the museum first focused its collections on early Tallahassee. Nunez and others gathered pieces for exhibits from residents’ attics. In order to establish the museum, the founders collected what they knew — the Big Bend area. Thus, they gave Tallahasseeans a sense of ownership in the museum.

The museum’s collections grew rapidly and soon required more space than the old house had to offer. After several years of vigorous fundraising, $65,000 in 1960 alone, the museum moved to its present location on Lake Bradford in 1962. On 50 acres of land, the museum developed its animal collection in cages outside of the main building. Doves, opossums, raccoons and pheasants, among others, were loaned to area schools for classroom teaching. Not until the 1970s were the habitats built to exhibit larger animals such as the black bears seen at the museum today.

In the 1980s, several initiatives aided in building the Florida panther habitat, as well as the reptile house and other permanent exhibitions. The outdoor habitats led to museum participation in the Red Wolf Species Survival Program, beginning in 1988. The Tallahassee Museum was one of the first zoos in the country to breed red wolves in captivity. Once considered biologically extinct, there are now 300 red wolves alive today.

Kids’ Stuff — With a Twist

After all of the changes the museum has made, the prevailing notion is that it still a place for kids. Taking “Junior” out of the name was a decision that came before boards of directors as early as 1977. In 1992, the name was officially changed to the Tallahassee Museum of History and Natural Science, thus reflecting two significant developments. First, the name change forced the Tallahassee community to recognize that museum events are for everyone, not just children on their class field trips. Secondly, collecting from the local area was now the museum’s driving force. In the past, the museum took its visitors to faraway lands; now, it shows them what is in their own backyard.

“What I hear most often is, ‘It will always be the Junior Museum to me.’ Adults get as much wonder and amazement from animals and living history as children do,” says Janet Borneman, director of institutional advancement. “Around 1989–1990, we needed to broaden our base and make people realize that we are not just for children. We decided to grow up.”

Although the founders focused on worldwide collections, they did accept donations from locals, including buildings such as the Bellevue Plantation house and its furnishings, which are incorporated as part of the present site. The museum now maintains the former collection in archives but actively collects only artifacts from Florida, mainly the Big Bend area.

“In the 40th anniversary, we tried to show the growth of the museum, artifacts from each part and each aspect of its history,” says Linda Deaton, curator of collections and exhibits. “The collection is driven by the mission of the museum. In the early days (of the museum), people charted ideas for community needs, and now we are an internationally respected museum. Our growth is the buildup of 40 years of hard work. We are very much a part of the community and represent the values of the community.”

Even though the anniversary year is drawing to a close, the museum is forging ahead. At the top of the list, the Bellevue plantation is reopening after renovations. A kitchen that is modeled after a 19th-century Southern kitchen, much like the one that was attached to the original house, has been added to the site. And next year, to bring the Commissary in line with Big Bend history, an addition is being planned that will reflect the strong economic ties this area had to turpentine production in the 1800s.

“The far-reaching goal is the extension of the museum into all areas of Tallahassee,” Daws said. “Year after year, there is so much excitement about learning about where we live. We hope they are so excited that they want to come and learn more.