Welcome to The Best Steakhouse in Tallahassee

For 18 years, Marie Livingston’s Steakhouse has fed Tallahassee residents its savory cuts of marbled beef, marinated in its signature secret sauce. The restaurant, which moved into its third location late last year on Apalachee Parkway, is a raved-about local favorite, the type of restaurant where people plan 11:30 a.m. lunches and 9 p.m. dinners to escape the crowd.

But what many Tallahassee residents don’t know is that the popular steakhouse isn’t an out-of-town chain, nor is the name a marketing gimmick. There is a real Marie Livingston.

She has perfectly coiffed, shoulder-length brown hair, a sweet, slow Southern drawl that comes from her Alabama upbringing, and a gracious way of greeting strangers that immediately puts them at ease. Not that she needs it, but the grandmother has the help of her two grown daughters, Sonya Livingston and Susan Higdon, both former professional dancers.

Though elegant in appearance and demeanor, don’t be fooled: Livingston is a roll-up-her-sleeves workaholic who spends her days making sure her damaged hardwood floors are fixed, the food is just right and guests are happy.

“I hadn’t thought about it,” Livingston says, although she does allow that she “might want to take a few more days off.” Her daughters interject, saying their mother went on a short out-of-town trip recently and was itching to get back to the restaurant after two days.

The truth is that Marie Livingston knows hard work, having managed or owned restaurants all her adult life. She is renowned for her great food, but her success also is attributable in part to her business savvy and flair for restaurant décor.

When she first moved to Tallahassee in 1991, Livingston was warned against opening a restaurant just east of Capital Circle Southeast on Apalachee Parkway, where Old Mexico is now.

“They told me that building was jinxed,” Livingston says. “No restaurant had been there more than six months. But I told them that building had nothing to do with it.”

It Began with a Date

Livingston grew up in a speck of town called Malvern in southern Alabama, which currently has a population of 1,200 people. She spent a lot of her time in nearby Dothan and, after graduating high school, decided to apply for a job at a new, popular
barbecue restaurant.

One of the co-owners of Dobbs Famous Bar-B-Que, Bill Livingston, decided that he needed to meet this applicant personally and asked Livingston if he could come to her house for lunch.

“I was so excited. I just wanted a job,” she recalls. Afterward, he asked her to dinner in Dothan.

She didn’t get the job, but they did date — and eventually got married. Then she was put to work. For 26 years.

As the wife of one of the owners, Livingston filled in as manager and hostess.

“I loved it,” Livingston says, her eyes shining. “It wasn’t even like a job, to tell you the truth. It was like one big family.” Their two girls helped out, and when they weren’t tall enough to reach the soda fountain, an old milk crate would do the job.

“It was like having guests over every day,” says Higdon. “She’s tried to bring that sense here, too.”

After her daughters had moved to New York City, one dancing for the famous Radio City Rockettes and the other dancing for Holland America Cruise Lines, Livingston’s marriage fell apart. After 26 years working at her husband’s restaurant, she didn’t know what to do.

“All I had ever done was work in a restaurant,” Livingston says.

After her divorce, she moved to Birmingham, Ala., because she liked the city and decided to apply at the upscale department store Parisian. In the application, she left the salary-requirement line blank.

“I didn’t have a clue what people made in a place like that,” Livingston says.

After an interview, she was offered a job paying $6 an hour, plus 1 percent commission.

After her first busy weekend, Livingston learned that 1 percent commission was, on her best day, an extra $50 per shift.

“That wasn’t going to cut it,” she says. It would hardly cover her basic bills. Livingston realized that many of the other women worked at the department store part time and had the salary of a husband for support. She quit after a mere six weeks and, at the urging of her Tallahassee attorney, Mark Levine, decided to relocate to Florida’s capital city.

Besides Levine, Livingston didn’t know anyone in Tallahassee. She had no friends, no family and certainly no business contacts. Levine warned her against that first location on Apalachee Parkway. Others scoffed at the idea of a steakhouse when there were already three in town.

But Livingston was stubborn. She had an eye for seeing potential in worn, abandoned restaurant buildings, thanks to her quarter-century of restaurant management experience and strong business instincts. Her ex-husband had taught her the importance of keeping her overhead low — finding cheap rent, not going into debt buying equipment, and keeping labor and food costs down.

So Livingston decided to make a go of it, bringing along her interior decorator’s vision for how to style a restaurant. She adorned the first location with a country and Western theme, with red and green checkered tablecloths and Frederic Remington prints of cowboys and horses.

Livingston opened her doors on April 21, 1992. Oddly enough, the restaurant’s name wasn’t even Marie Livingston’s. It was Texas Longhorn Steakhouse. Livingston was confident in her concept and knew that the food was her secret weapon.

“I knew we weren’t going to have a large menu, I was going to simplify it,” she says. Livingston intended to use recipes she was familiar with from not only her ex-husband’s restaurant, but also from a steakhouse her sister had opened.

Her daughters say Livingston has always had a talent for cooking. When their mother would visit them in New York City, daughters Higdon and Sonya Livingston would beg her to cook a meal for them … and a dozen of their friends. Their group of “friends” grew larger once the word got out about Livingston’s cooking.

Livingston brought her family’s melt-in-your-mouth dinner-roll recipe and the secret steak sauce with her to Tallahassee, sure that they would be just as much of a hit as they were in Dothan.

Those first few months, she did most of the prep work in the kitchen, and baked the rolls herself every day.

“All of us, but especially my mother, would stand by the door every night at opening and introduce herself to every customer that walked in,” Higdon says.

By then, Sonya Livingston and Higdon were helping their mother out whenever there was a break from their thriving dancing careers. Soon, there were repeat customers, and word spread about her famous sauce. There were some bumps in the road — such as when she got an angry letter from the Atlanta-based LongHorn Steakhouse accusing her of stealing their trademark.

Livingston promptly changed her restaurant’s name, and when the LongHorn Steakhouse moved into town on Valentine’s Day in 1993, Livingston expanded her hours to lunch to match theirs.

Confused customers thought she had opened a second location. But when they saw that the famous rolls were missing and there was no secret sauce, they came back to her restaurant.

“And nobody ever even noticed that we changed the sign to Marie Livingston’s,” she says.

For 10 years, Livingston remained at the Apalachee Parkway location. But in 2000 she decided to open a second location near North Monroe Street and Interstate 10, tucked behind a group of hotels. Driving by, one wouldn’t know her restaurant was even there. But strong word-of-mouth kept her business thriving, and it became an in-the-know favorite of Tallahasseeans.

Her daughters left New York City and moved to Tallahassee to help manage the restaurant.

“Stepping back into the restaurant for us is like stepping into a show, dancing,” Higdon explains. “It’s what we do. It’s part of who we are. We love it.”

“One of her secrets to success is she doesn’t overdo it,” Higdon says. “She does the right thing, and she wants it to be top-notch.”

Livingston has responded to the changing American diet without dramatically changing her menu, Higdon says.

“As she has progressed over the years, she has gradually added new things that she felt confident (were) the right quality.”

Though she was successful at the North Monroe location, Livingston never forgot the business lessons learned from her days at Dobbs Famous Bar-B-Que. She had to keep her costs down. Her utility bills began soaring and one year reached $11,000 a month.

“That bill was out of sight,” Livingston says. She had 80 employees’ salaries to pay for, and rent was also increasing.

Livingston began searching for a smaller location with less overhead. As the recession intensified, Sonya noted that her mother did the smart thing by moving to a less expensive building. 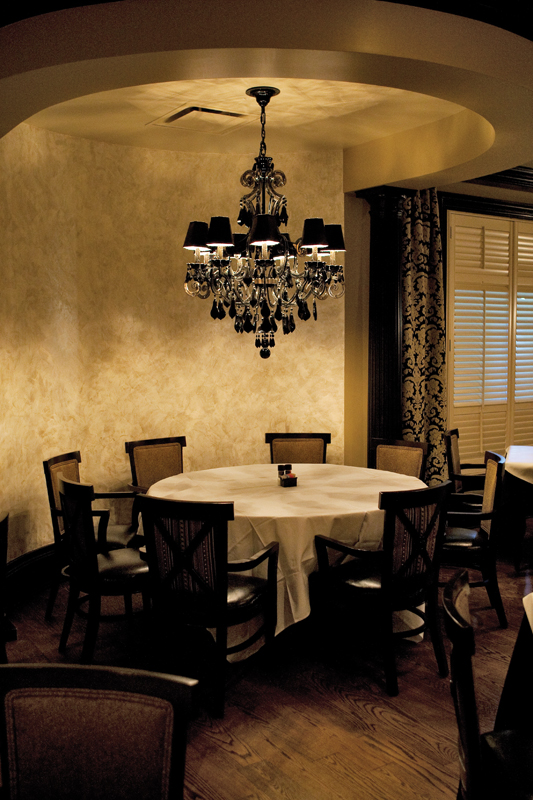 “If your expenses are staying the same or rising but your revenue is declining, it’s simple math,” Sonya Livingston says. “So we had to find a place that
was affordable.”

Once again, Livingston found a location that many restaurateurs had passed on. Back on Apalachee Parkway was a closed Durango Steakhouse. It had a ho-hum beige exterior, while the interior beamed with bright-red drop lighting and a Western décor. This time, Livingston wanted to stay away from the Western theme.

“When she first picked this building, I was like ‘Mother, what on Earth are you thinking? It needs so much work,” Higdon says. But Livingston had a vision for renovating the building that transformed it into a more elegant, upscale dining establishment.

Livingston says the changes were necessary because now, more than ever, she faces competition from popular restaurants such as Carrabba’s, Shula’s 347 Grill and Bonefish Grill.

“The food is the same and the people are the same, but she’s made the décor very nice for today and competing for the chains of today,” Higdon says.

Opening two days before Christmas last year, the new Marie Livingston’s Steakhouse was jaw-droppingly different. The floors are made of marble and hardwood, and the dramatic entryway has a dome made of distressed silver leaf along with a vintage red sofa for seating.

The cream walls have black baseboards and crown molding, and dramatic chandeliers dangle from the ceiling. The booths and chairs maintain the cream-and-black theme, and large curved booths make for a cozy, intimate setting. The well-stocked bar is made of black granite, and Livingston has plans to install a flat-screen television for game days.

Livingston says she wanted to upgrade her décor but didn’t want it to be “too fancy.”

“This is a family restaurant,” she says. “We’ve always been oriented toward children and families.” Sure enough, most days there are families with small children in her restaurant, and her own grandchildren can often be found amusing themselves in her office.

Livingston is modest about her role in the restaurant’s success and quick to credit others.

“We don’t have a lot of turnover,” she says. “I’ve got one employee who started to work with us when I first came to town in 1992. I’ve got another who has been in the back of the house for 10 years.”

Her daughters see it differently. The name on the sign is “Marie Livingston’s” for a reason.

“Think about somebody coming and opening a restaurant in a new place like she did in ’92, into a building that everyone tells you is not going to work, and they tell you ‘not a steakhouse’ because there are already too many and you’re a woman,” Sonya Livingston says. “But you have that conviction, and you know what you have to offer. It is really an inspiration for people to see someone come and do that and be successful.

“It’s her recipe. It’s the price point. It’s the service, but it’s also just her,” she says.