The Puzzling Story of George Proctor, a Free Black Man During the Time of Slavery

George Proctor’s name and story are familiar to any student of Tallahassee’s territorial period. He was the middle link in a strong and influential patriarchal chain that stretched from the Second Spanish Colonial Period through Reconstruction. George’s father, Antonio, gained fame as an interpreter, scout and messenger, dealing with Indians in Florida for both the Spanish and Americans. His son, John, was heavily involved in Reconstruction politics in Tallahassee.

But, when examined closely, we don’t really “know” George, and there are many puzzling and intriguing questions left unanswered about him. The fact is, George Proctor left very little evidence behind. He left no known personal papers. The few hard facts that do exist consist mainly of legal documents such as deeds, contracts and court proceedings. Most of the story we know today was told by John Proctor, who was only 4 years old the last time he saw his father; and his story was not written down until the 1930s — 60 years after George’s death. As with all transcribed oral histories, the accuracy of the information is subject to the memory of the storyteller and the ability of the interviewer.

So, what do we know about George Proctor?

A carpenter’s apprentice, George was living in Tallahassee by 1829, moving here from St. Augustine with the man he was training under, Daniel McQuaig. When McQuaig tried to take George with him out of the Florida territory, George’s father, Antonio, intervened and filed suit, ending the apprentice contract. The 1830 census shows the population of Tallahassee to have been 926 — 541 whites, 381 slaves and four free blacks. George and Antonio Proctor represented half of the free black population. Socially and professionally, they occupied a unique niche in Tallahassee between slaves and free white men.

Antonio had been born a slave but gained his freedom toward the end of Spain’s second colonial period in Florida. As Antonio’s son, George was likely born free. George Proctor would spend 20 years of his life in Tallahassee and gain the reputation of being one of the capital’s best builders. Many of the houses known to have been built by him no longer exist. Curiously, we’re not certain Proctor was the builder of the house most associated with him today, the Knott House Museum. But existing legal records do show that George Proctor was a successful entrepreneur sought out for his carpentry skills. 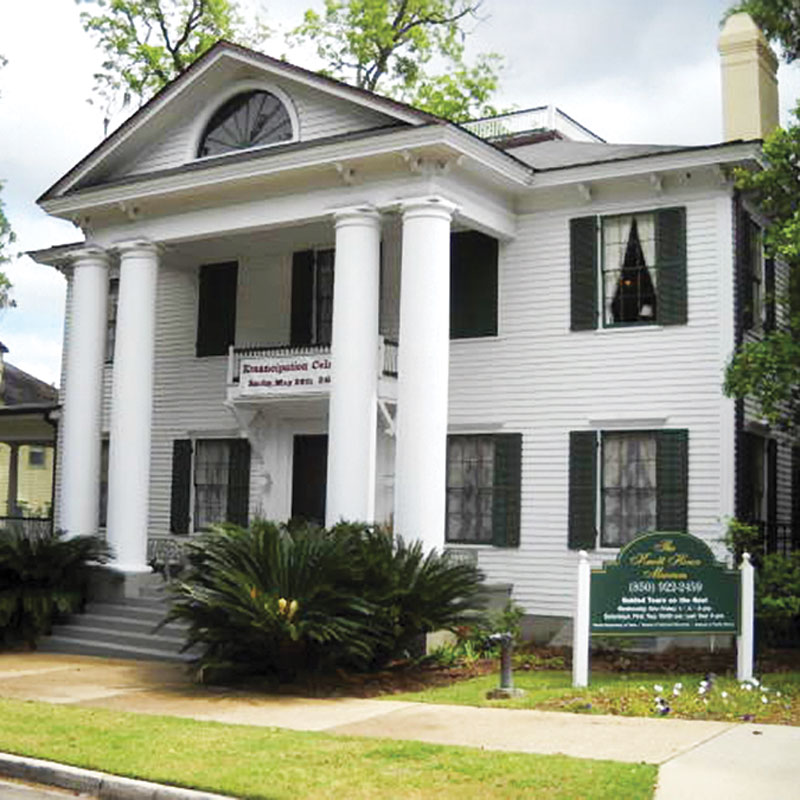 On May 8, 1839, George Proctor married Nancy Chandler, a 24-year-old slave owned by Mary Chandler. George made arrangements to buy Nancy’s freedom for $1,300. As he did not have enough cash, he put $450 down and signed a note for the remaining $850 to be paid within the next 12 months. By all accounts, this note was never settled and Nancy’s freedom was never secured. This would become one of the most puzzling parts of George Proctor’s story. George borrowed money and paid off debts throughout his career. Why did he not settle the debt that would have assured his wife’s freedom?

The early 1840s were a time of economic downturn, and George Proctor’s business was hit hard. Proctor found himself in a terrible predicament. He could not declare bankruptcy to clear his debts, because to do so would have risked sending his wife and children to the auction block. Since he had not cleared the note on Nancy, she and their children were considered to be his property first and family second. George worked in and around Tallahassee throughout the 1840s, but his debts continued to mount.

In 1849, George Proctor headed for the gold fields of California, leaving his wife and children behind — along with a number of unpaid debts. His plan was undoubtedly to reestablish himself in a new place where he could practice his trade and make enough money to settle his debts and free his family. One of the only known pieces of George Proctor’s own words appeared in the Floridian March 10, 1849: “In bidding adieu to my friends and patrons, I would return them my most sincere thanks and heartfelt gratitude for the kindness, liberality and patronage extended to me from the days of my boyhood to the present. George Proctor.” George Proctor would never return to Tallahassee, and his family would never join him in California.

Despite evidence of some early success in California, George soon ran into financial trouble there, too. As with so much of the Proctor story, the details of this period are unclear, but one fact is certain. On February 6, 1854, Nancy and the six children were sold at auction to clear part of George’s debt. A year later, George’s father, Antonio, died in Tallahassee. It’s not certain how much George knew of the events that were unfolding in Florida, but he didn’t return. There is some evidence that George Proctor became involved in a civil rights movement in California towards the end of his life. He certainly could have offered a unique, personal perspective on these issues. George Proctor died in Sonora, Calif., at the age of 64. His obituary identified him as an “old resident of Sonora where he has lived since 1850 and was highly respected by all who knew him.”

Why has George Proctor’s story endured? While George’s story is interesting on its own, its survival is due in part to his father and son. Three generations of exceptional men give the history an added strength and importance. Whatever the reason, we are lucky to have this unique, if somewhat puzzling, insight into the life of a free black man in the age of slavery. It adds immeasurably to our understanding of the period.

So, in the end, is George Proctor an enigma? In many ways — as a free black who operated as a businessman in the Antebellum South, as a common man whose story survives along with the era’s elite, as a husband and father who left his family knowing what the consequences could be — the answer has to be “yes.”

The book, “Free Men in an Age of Servitude, Three Generations of a Black Family” by Lee H. Warners, was used as a resource for this story.