Fear and Dread in Tallahassee 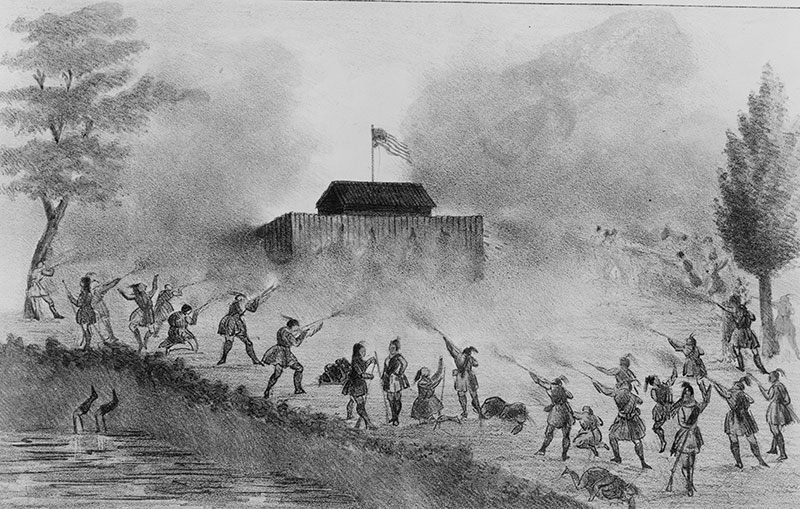 The significant battles and skirmishes of the Second Seminole War (1835–1842) may have taken place in Central and South Florida, but Indian attacks — and fear of attacks — kept local townspeople and settlers on edge for most of the long, seven-year war.

“In the Second Seminole War, we were under constant fear here in Tallahassee,” said historian Joe Knetsch, who lectures frequently and has written two books on the subject. “There were so many reported massacres that Leon County was on tiptoes during the war.”

While most of the fighting happened south of Tallahassee, resurgent Seminole warriors sprang occasionally from the woods, trails and swamps of North Florida to wreak havoc. Unrest among the Creek in Georgia and Alabama added to the tension.

“The reality of frontier warfare often hit the Tallahassee area and made the people impatient with the army,” Knetsch wrote in his 2008 book, “Fear and Anxiety on the Florida Frontier: Articles on the Second Seminole War.”

The Situation on the Ground

In the 1830s, Florida was divided into three geographic areas. The area between the Apalachicola and Suwannee rivers was known as “Middle Florida.” Everything east of the Suwannee was East Florida, and the land west of the Apalachicola was West Florida. Florida’s entire population numbered around 34,000; of that number, 18,000 were white, and there were 16,000 black slaves scattered along the peninsula.

According to late author and University of Florida professor John K. Mahon, there were only 4,000 Seminoles in the territory. It’s not clear how many were warriors, he said in his well-known “History of the Second Seminole War 1835–1842.”

“Opinion differed as to the number of warriors. The highest estimate was 1,400, but old President Jackson was sure the figure was 900 too high,” Mahon wrote. “From the President on down, the tendency was to underestimate the foe.”

Of course, not all the warriors were Indian. Knetsch said that 800 blacks joined the Seminoles and fought against the whites.

“Almost all were escaped slaves; many were extremely talented people, some of whom spoke many languages and served as interpreters between the Indians and whites,” he said.

“The Seminoles were experts at asymmetrical warfare,” Knetsch said.

Years of mutual distrust and border raids, fueled by the government’s Indian removal policies and the festering issue of slavery, finally erupted into open warfare in the mid-1830s.

In December 1835, soldiers and Seminoles fought several skirmishes in the Alachua and Payne’s Prairie region. Volunteers under the command of Gen. Richard Keith Call were attacked in the vicinity of present-day Micanopy, and Indians burned some plantations to the ground, Knetsch wrote in a 2003 book, “Florida’s Seminole Wars 1817–1858.”

But the most audacious and notorious incident happened on Dec. 28, 1835, when Seminoles attacked and eliminated U.S. Army Maj. Francis Dade’s 108-man relief column en route to Fort King, near present-day Ocala. At the same time Dade’s men were under attack, Osceola assassinated Indian agent Wiley Thompson and six other men near Fort King. The very next day, a strong force of U.S. Army regulars under Gen. Duncan L. Clinch and Florida militia under Richard Keith Call engaged Osceola’s warriors on the Withlacoochee River in a skirmish that left four regulars dead and 25 wounded.

“It was not perceived as a victory by the newspapers or the army,” Knetsch wrote in “Florida’s Seminole Wars.”

The next defeat came in January 1836, when a group of St. Augustine militia was routed near a plantation in Dunlawton, north of New Smyrna. Indians destroyed several valuable plantations along the St. Johns River, causing many civilians to flee into St. Augustine for safety.

“The stalemate of Clinch’s army, the disastrous defeat of Dade’s command, and the distressing news from Dunlawton all the hit the newspapers of the country at about the same time,” Knetsch wrote. “The additional news concerning the large number of burning plantations, the defection of slaves to the Seminoles, and the attacks close to centers of population gave the nation a taste of the unsettled feelings of most Floridians.”

The Army and various state militia groups could never bring the Seminoles to a pitched battle, with the possible exception of the Battle of Lake Okeechobee in December 1837. However, Gen. Thomas Sidney Jesup was so confident that the Indians were no longer much of a threat in the rest of the territory that he shrugged off reports of attacks farther north.

“The day after the Battle of Okeechobee, far to the north of the lake, General Nelson’s Georgia volunteers engaged in a brisk fight on the Wacasassa River (in today’s Levy County),” Mahon wrote. “General Jesup, concluding that Nelson had fought a wandering band and that most of the fighting power of the hostiles was still before him in South Florida, continued intensive preparations in that region.”

But while Jesup — famous for being the commander who captured Osceola — busied himself with supply lines and fort construction, those “wandering bands” were making their presence felt on the other end of the territory.

Mahon said that in 1838, “two Georgia families were murdered by Indians who then hid in the Okefenokee Swamp. The Lasley family was murdered near Tallahassee on July 28, and the Gwinns on the Santa Fe in the same month.”

Even though regular army and state militias funneled through Tallahassee on a regular basis, the locals fortified parts of town. On the corner of what is today Park Avenue and Adams Street, the First Presbyterian Church — among the oldest churches in town today — was an official wartime refuge, according to Pastor Brant Copeland. Vertical rifle slits were cut into the brickwork of the church, he said. These ports are now below ground but can be seen from inside what is now the church basement. In addition to these rifle ports, a cleared area around the church provided an open field of fire for defenders.

Historian Knetsch said that back then, Park Avenue was known as “400 Foot Boulevard” because of this open area. Copeland said that during the great Tallahassee fire of 1843 the church was saved because this “clearance” proved to be a handy firebreak.

Outlying areas were highly prone to attack. One prominent Leon County family found themselves the unfortunate victims of a “massacre,” Knetsch said. In the spring of 1839 — during a period of “peace” orchestrated by America’s top-ranking general, Alexander Macomb — the family of Green Hill Chaires was “attacked and almost totally wiped out by marauding Indians not far from Tallahassee,” Knetsch wrote in “Florida’s Seminole Wars.”

“Other attacks took place around Florida, and the Seminoles were appearing near fortifications with plenty of arms and ammunition,” Knetsch wrote. “At Fort Andrews in Middle Florida the 17 healthy men of that garrison held off an attack of nearly 40 Indians.”

Knetsch said the Indians taking part in these attacks had not participated in Macomb’s peace council. “Coacoochee, Hospetarkee, Tiger Tail, Billy Bowlegs, and many other small bands were not represented at the council,” he wrote.

In his memoir, “Origin, Progress and Conclusion of the Florida War,” John T. Sprague — an aide to Macomb — noted that the attacks of the summer of 1839 quashed hopes the settlers had for peace.

“Early in the month of July, trains, express-men, and travelers, were assailed on the highway; plantations were attacked, and the occupants again fled, leaving every thing behind,” Sprague wrote.

In a report to the Army’s adjutant general summing up his military campaigns in Florida, Col. Zachary Taylor said, “Several families had been murdered within a few miles of Tallahassee, near the railroad leading to St. Marks … in a part of the country hitherto exempt from the depredations of the enemy. The utmost consternation and alarm prevailed in that country.”

Calls for action reached Secretary of War Joel Poinsett, who called for all-out war on the Indians in an annual report to the president.

“The experience of the last summer brings with it the painful conviction that the war must be prosecuted until Florida is freed from these ruthless savages,” Poinsett said. “The frequent murders committed in West and Middle Florida, show that there are still small bands of Indians lurking there, and it is the determination of the department … to drive them from that portion of the territory.”

Back in Florida, Taylor sent Col. William Davenport, a seasoned campaigner, north to deal with the new menace. The object of this monumental task — which took the army across the swamp known today as Tate’s Hell — was to pacify the area, but few Indians were found, according to Knetsch. There was, however, political fallout.

“Nothing (the Army officers) did satisfied the political citizens of the territory,” Knetsch wrote in “Florida’s Seminole Wars.” When Gov. Richard Keith Call complained about the “weak response” of the army, President Martin Van Buren replaced him as governor with Judge Robert Raymond Reid, who died two years later in 1841 of yellow fever.

An Officer’s Impressions of Tallahassee

“We passed through the principal part of the town. It does not make much show.”

That’s how U.S. Army Quartermaster and future Civil War general Samuel P. Heintzelman described Tallahassee when he arrived in town on Nov. 21, 1838, before Macomb’s peace attempt. Heintzelman’s job was to provide the troops and various posts with forage and supplies. During his two-year stint in the territory, he traveled over much of Middle Florida. He kept a record of his experiences — and had almost nothing complimentary to say about Tallahassee.

However, Heintzelman found some pleasure in socializing among Tallahassee’s power players. Even in those far-off days, Tallahassee had much political intrigue, according to Knetsch.

“His circle of acquaintances soon grew to include both Drs. Randolph, the Eppes family, the Gambles and Bradens, the Alstons, Mrs. Achille Murat and numerous others of all classes,” he wrote in “Fear and Anxiety.”

Meanwhile, the realities of the ongoing conflict were never far away.

“The constant reporting of deaths among the neighbors made everyone feel uneasy,” Knetsch wrote.

Heintzelman remarked that “Indians” had killed a family and burned their house near the head of the Wakulla River about a dozen miles from town. Then, in late December, a wagon train was attacked near the Aucilla River. One man was killed and another wounded along a route that troops had just passed through “but a day or two ago.”

However, white people could be just as violent. Heintzelman recalled an incident where at least one Indian, possibly a Creek, had been scalped by a white settler.

“His whole scalp was taken off and his right hand and otherwise mutilated,” the soldier noted in his diary.

In “Fear and Anxiety,” Knetsch remarks, “The war had its brutality on both sides of the ledger.”

By 1843 a total of 3,800 Indians had been shipped west from Florida. In August, the war was declared over. In November, it was estimated that only 300 Indian men, women and children remained in the territory.

However, the troubles didn’t end there, according to Knetsch. There were “constant rumors” of Indian attacks and ambushes over the next decade, and the desire by whites to remove all Indians would eventually set the stage for the Third Seminole War.