Americans living in remote places making their own alcoholic beverages have long figured in history and folklore.

From the Prohibition era forward, they have been known as moonshiners, that is, people engaged in producing homebrews variously called mountain dew, choop, hooch, mulekick, shine, white lightning, white-corn liquor, white-corn whiskey, pass around, firewater or bootleg. The illegality of such intoxicants added a certain romance about them.

Less dodgy but far more available are legal variations of moonshine — produced by Ole Smoky and Murder Creek — that are now commonly found in liquor stores.

Ole Smoky was founded in 2010, according to Sydney Holsclaw, its senior public relations manager.

“Ole Smoky is the first federally licensed distillery in the history of East Tennessee,” Holsclaw said. “Due to the overwhelming success of our original moonshine flavors, we began crafting new flavors within the first few years of our company’s founding.”

Ole Smoky’s whiskey line first appeared in 2016, coinciding with the creation of The Barrelhouse distillery in Gatlinburg. There are 16 different Ole Smoky whiskeys today.

There are three other Ole Smoky distilleries in Tennessee: The Holler in Gatlinburg, The Barn in Pigeon Forge and 6th & Peabody in Nashville.

“Ole Smoky is the leading distiller of premium moonshine in the world and the leading craft distiller in the U.S.,” Holsclaw said.

“I think because it is associated with bootlegging, it is an alluring option for people. It sounds exciting,” Brown said. “Moonshine has traditionally been viewed as high octane and tough to drink, but now the flavored stuff that is so popular is often lower proof than most whiskeys.”

Alcohol content in Ole Smoky products ranges from 35 to 100 proof.

“We sell Ole Smoky moonshine in many different flavors, including regular, apple pie, banana cream pie, mango, cherry and pickle,” said Mike Raynor Jr., the owner of Mike’s Liquor & Beer Barn in Tallahassee. “They are very popular, and I believe it is due to the fact that they have fruit soaking in the alcohol that makes for a strong but flavorful snack and also allows the customers to feel as if they are drinking traditional moonshine.”

Stephen Matthews of Navarre is Murder Creek’s founder and distiller.

“Stephen started making his own moonshine, just playing with it in 2017,” said Charity Blazek, the company’s production manager. “In 2018, they applied for a license and they started in Riverview, just outside Brewton, Alabama, in 2019.”

There is also a large Murder Creek Distillery in the OWA theme park, located in Foley, Alabama. 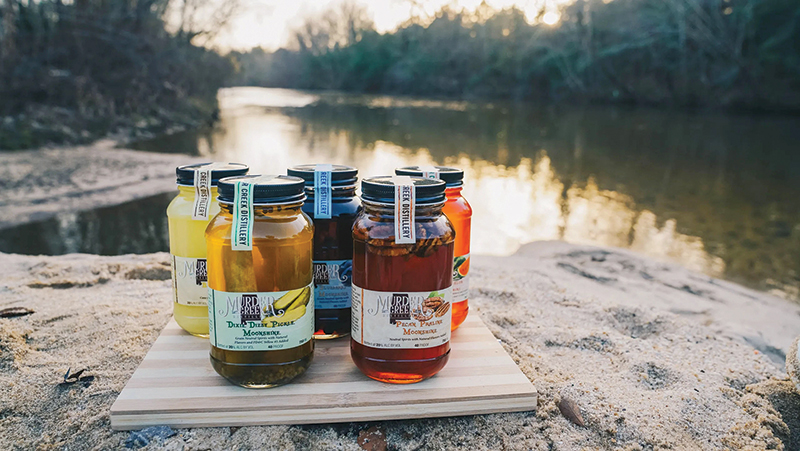 “We started with very basic flavors,” Blazek said. “Then as we started branching out, we made some based on old family recipes. Blueberry is from his great grandmother’s ice cream sauce recipe.”

There are 14 flavors available now, sold throughout the Emerald Coast and all over Alabama. Murder Creek’s products range between 40 and 50 proof.

“Our moonshine is distilled to a high purity with no flavors of the mash coming through,” Matthews said. “We don’t use corn, so we don’t have that corn aftertaste. We also hand make every batch, hand bottle and hand label each product.”

Tours are conducted at both the Brewton and Foley distilleries, and Foley features a large bar and tasting room with events most weekends.

“We’re looking to open a third distillery; we’ve tossed around the idea of another location in Alabama,” Blazek said.