Starting Your Garden From Seeds on The Cheap 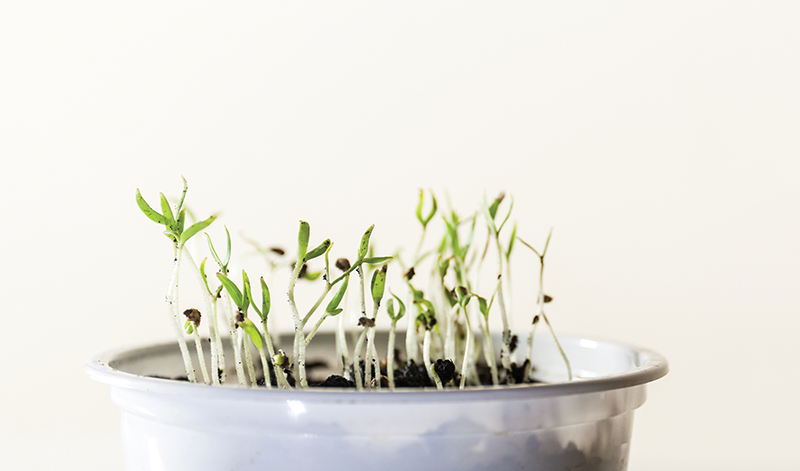 Step 1: Pick your containers: You can purchase peat pots and plastic seed-starter kits, but single-serve coffee K-cups work well. Toss the spent grounds in your compost pile and rinse the cups; there’s already a drainage hole in the bottom.

Step 2: Pick your seed-starting medium: Most nurseries sell a seed-starting mix, but you can make your own with one-third pasteurized potting soil or screened compost; one-third peat moss; and one-third sand, vermiculite or perlite.

Step 3: Fill the K-cups with the potting mix, and pat down on the mix to remove air pockets. Sprinkle two or three seeds in each cup. For large seeds, just use one seed per cup. Press lightly to make sure the seeds are in contact with the soil and sprinkle a tiny bit more potting mix over the seeds. Moisten the pot.

Step 4:  Make a mini-greenhouse using an old deli tray and its domed lid, or a clamshell lettuce container. Put the planted K-cups inside. When the seeds sprout, remove the cover and place the tray under fluorescent lights. You can also place the tray on a heating pad to encourage growth.

Step 5: Keep the plants moist. When they’re a few inches tall, transplant them to plastic yogurt cups with holes poked in the bottom. Keep them under grow
lights before you intend to plant them in the yard. Move them outdoors to a shady area then gradually move them into a sunny area before planting the seedlings in your garden.

Fire ants are invasive insects from South America that inflict painful stings. They build mounds above ground, but their nests extend far below ground. Unfortunately, there is no control mechanism that reliably removes ants. Most people use a combination of the “bait” treatment and the “drench” treatment. To use the bait treatment, scatter poison pellets around the mound. Several poisons (such as rotenone) are made from botanicals and are effective at reducing ant populations. The drench treatment is intended to kill the queen. Boiling water is poured onto the mound or ammonia is poured into the hole. The idea behind both methods is to take advantage of the network of underground tunnels.