After recognizing an opportunity in the Japanese-inspired dining realm, owners Michael and Annie Chou opened Osaka Japanese Hibachi Steakhouse & Sushi Bar in Tallahassee in 1998. Having previously owned a Chinese restaurant in Tallahassee, Chou’s Dynasty, Mr. Chou saw an opportunity in uncharted dining territory: hibachi. While the Japanese Steakhouse concept was new for the Chous, the cuisine was not. Mr. Chou was raised in the sovereign state of Taiwan, which was occupied by Japan for 50 years.

From the conception of the Chou’s first Osaka Japanese Hibachi Steakhouse & Sushi Bar, to the rebuild of their new Tallahassee location in 2020, the Chous have always held true to three enduring values: cleanliness, service and quality. Over the years, they have grown into other markets and opened Osaka restaurants in both Panama City Beach at Pier Park and in the heart of Destin.

Open daily for lunch and dinner, Osaka offers hibachi, a full-service bar, Gulf-fresh sushi and sashimi from their expansive sushi bar — which is the heart of each of their locations. The exterior architecture of the buildings, surrounded by koi ponds and tranquil landscaping, evokes an authentic feeling that could only be found at a local restaurant in Osaka, Japan. 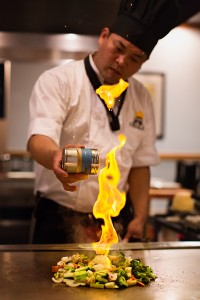 The success of Osaka is due in large part to the commitment of Osaka’s employees. The head chef in Tallahassee joined the team shortly after the restaurant opened nearly three decades ago, and the head sushi chef has been with Osaka for 15 years. This type of tenure in the restaurant business is quite rare, but it speaks to the consistency and loyalty the Chous have established in the workplace, as well as a high level of job satisfaction from the employees.

Whether seated at a hibachi table or at the sushi bar, the Osaka staff makes their customers feel like family. A show in itself, the hibachi room is filled with excitement, laughter and the delightful aroma of fried rice. It’s the perfect space for all corporate events, special occasions and celebrations, with seating of up to 100. If you’re in the mood for something more intimate, step inside the sushi bar area to witness their meticulous hand-crafted rolls filled with fresh-caught seafood and farm-fresh ingredients. The expansive menu allows guests to try something new during each visit along with their ever-changing sushi specials.

Visit OsakaHibachiAndSushi.com to find out more about booking your reservation for lunch, dinner or your next special occasion. Find Osaka Japanese Hibachi Steakhouse & Sushi Bar on Facebook and Instagram to stay up to date with the current specials, events and more.

How to Best Harvest Fest