Julian Dozier has been promoted to director of assurance services at Thomas Howell Ferguson P.A. Dozier has worked for more than nine years to provide auditing and consulting services and currently directs the Forensic Accounting and Litigation Support Services Department. He is a CPA and a designated Certified Fraud Examiner and holds the Certified in Financial Forensics certification. He also has an Accredited in Business Valuation qualification from the American Institute of Certified Public Accountants. Dozier has been appointed multiple times to state-level accounting and auditing committees.

Eugene Lamb has been reappointed to the Tallahassee Community College District Board of Trustees. He rejoins trustees Jonathan Kilpatrick, Frank Messersmith, Randy Pople and Kevin Vaughn. Lamb has been on the board since 2007 and served as chairman for the 2010-2011 and 2013-2014 academic years. He was a Leon County school teacher for 30 years and served eight years on the Gadsden County Commission. He currently serves as a member of the Governor’s Commission on Healthcare and Hospital Funding. Lamb’s new term began Oct. 5, 2015, and runs through May 31, 2018.

Lee Daniel, Leon County’s director of tourism development, was recently named chairman of the board of the Florida Association of Destination Marketing Organizations, a statewide association of tourism boards. Daniel has been the director of the Leon County Division of Tourism Development, also known as Visit Tallahassee, going on six years. Before he came to Leon County, he was the deputy director of Visit St. Pete/Clearwater Convention & Visitors Bureau.

Mark S. Hicks, Sr., has joined Capital Health Plan as its new sales director. In that role, Hicks will oversee all large and small group commercial sales and renewal and account service functions. He brings with him more than 17 years of health care and operations experience in sales, marketing, customer service and health care administration. In addition, he is on the board of directors for the Florida Association of Health Underwriters and is a past president of the local Capital Area Association of Health Underwriters.

Tara R. Price, a former judicial law clerk in the U.S. Court of Appeals for the 11th Circuit and the U.S. District Court for the Northern District of Florida, has joined Holland & Knight’s litigation practice as an associate in the firm’s Tallahassee office. Her area of focus will be in administrative, commercial, fiduciary and appellate litigation. In law school, she was a legal intern for Florida Supreme Court Justice Charles T. Canady and a Gubernatorial Fellow for Gov. Rick Scott and Gov. Charlie Crist. Price received her B.A. degree from the University of South Florida and J.D. degree from Florida State University.

Angelyn Hirai of Florida State University Lab Schools was one of nine outstanding Florida educators to be recognized recently with a Governor’s Shine Award, presented by Gov. Rick Scott to teachers and administrators who make a difference in education. Hirai has been a music teacher for more than 15 years and is known for developing campus events that highlight people, places and time through music.

Miaisha Mitchell, co-founder of the Tallahassee Food Network, was honored by Gov. Scott and Volunteer Florida CEO Chester Spellman who presented her with the Champion of Service Award. As a community volunteer, Mitchell has led the effort to advance health issues in underserved areas in Tallahassee. She is a leader in the Childhood Obesity Prevention Education Coalition. As co-founder of the Tallahassee Food Network, Mitchell supports the need for gardens to provide healthy, affordable food for everyone in the community. She has spearheaded the creation of two workplace gardens, four church gardens, four school gardens and five community gardens.

William “Bill” Hambsh, chief executive officer of North Florida Women’s Care, is now a fellow in the American College of Medical Practice Executives, the certification entity of the Medical Group Management Association. Fellowship in this group’s industry-leading program indicates mastery and expertise in the profession of medical practice management.

FLAG Credit Union employees Carrie Edgerson and Beth Wheeler took first place in the PSCU KnockOut Innovation Summit, a collaborative competition for credit union employees nationwide. Edgerson, a loan officer, has been with FLAG since July 2014. Wheeler, a member solutions representative, has been with FLAG since December 2013. Twenty-four teams representing 23 credit unions assembled in Florida, Hawaii, Arizona and Michigan in September. Participants had just one day to create a working prototype of a solution to a real credit union business need. Judges selected eight semi-finalists and then narrowed it to three finalists. Employees from PSCU and credit unions across the country voted on the best ideas submitted by the three finalists, and the grand-prize winner was announced in October. Originally chartered in 1960 to serve employees and the families of the Florida Department of Agriculture, FLAG Credit Union now serves a broader community and offers an array of financial services designed to help members recognize and achieve full financial potential.

Dr. Paul Harmon traveled to Brazil as part of his volunteer work with A Doctor’s Heart. Over the past eight years, these volunteers have installed 30 deep water wells, provided care to 10,000 people in medical clinics, given out more than a million dollar’s worth of medicine, dispensed approximately 2,500 pairs of glasses and offered many other services to help native Brazilians.

Georgia-Pacific and the Foley Cellulose Mill recently donated $13,000 towards helping kick off the 60th annual Florida Forest Festival, which was held in October. The festival is a fun and educational event in Taylor County that has been enjoyed by visitors from all over the region. 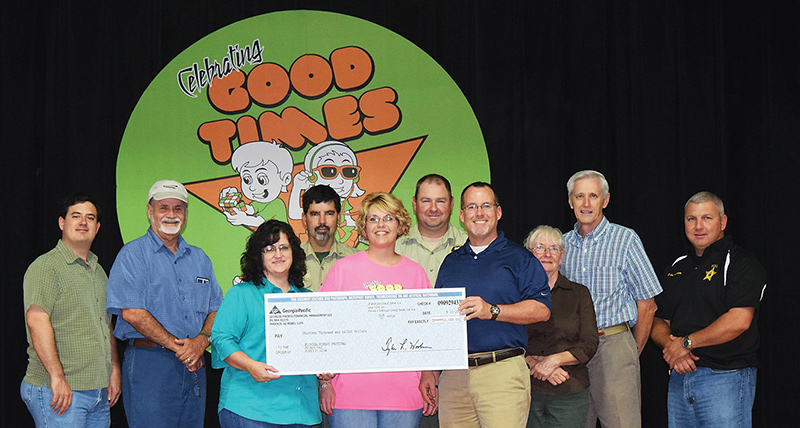