Savvy home gardeners know there’s more to a lush yard than the ground covers, flower spreads and shrubs that grow at ground level. They are finding that climbing vines can add welcome elevation and contrast as they wind in and around all sorts of structures. Many vines are so showy that they are bound to become a wow factor.

Climbing vines are readily available at Tallahassee nurseries and garden centers as well as from plant catalogs and online. However, combining vines that work well together can be a problem. That’s because they don’t all climb the same way, so while one may twine upward by itself, another may need to be pinned up to a structure to climb in the preferred direction.

Another thing to keep in mind is how vigorous a grower a vine is. Some of them are so profuse that they will keep you wielding your pruning shears more often than you’d prefer. For example, garden blogs often complain about wisteria growing too aggressively. While it’s true that this vine, if allowed to grow unchecked, can make a building look like a wooly beast, that reputation isn’t quite fair, says the horticultural team from W. Attlee Burpee & Company. If placed right and tended to, wisteria, with its stunning flower clusters, can climb up the walls and across the roof of an unsightly building and give it a look of a charming cottage in a storybook village.

There are more than two dozen ways that vines climb, but most are variations on four themes. There are twiners, and then there are vines that climb via tendrils, aerial rootless, or some kind of hook. 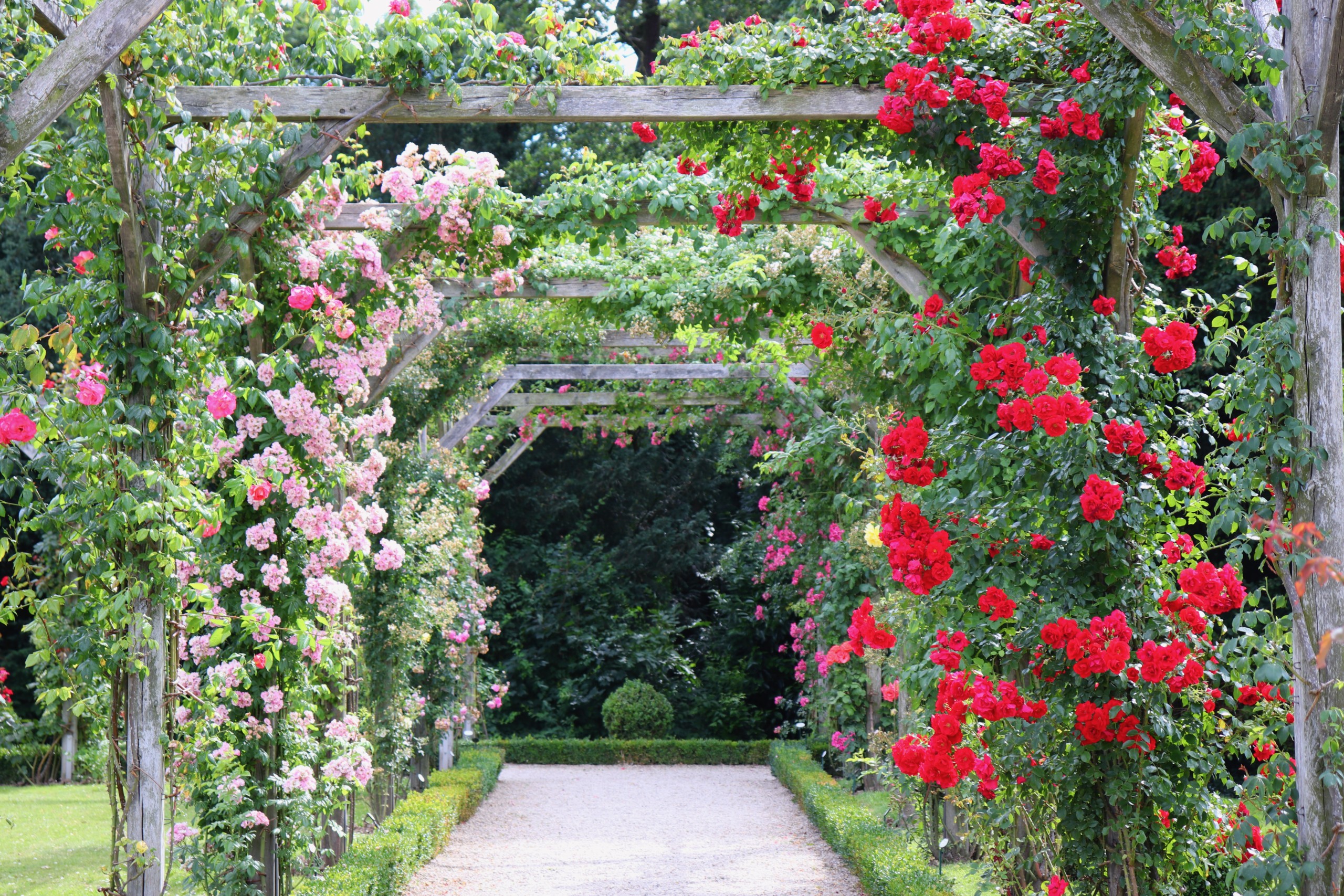 However thorny, roses, in all of their romantic colors, add a wow factor to flowerscapes and make any day a special occasion. Photo by iStock / Getty Images Plus / Vivian Song

The twiners, which send out shoots that will wind around a support, include varieties like wisteria, honeysuckle, hyacinth bean and chocolate vine. They need only a sturdy support to get going.

Members of the grape family, sweet peas and passion flowers are tendril vines, meaning that they have angel hair-like antennae that whip around until they find a support. Their tendrils are short and erupt all over the place, so they need something sturdy like mesh or chicken wire to keep them from latching to each other and ending up in a tangled mess.

Plants like English ivy and wintercreeper climb by aerial rootlets, and they’re unbelievably tenacious. They’ll latch on to a fence or a house, and it’s recommended that you prune them away from windows and gutters.

There are variations on these climbing methods. For example, roses use thorns to attach to a wood lattice or a tree trunk, but the canes still need a bit of direction. Weave them through a trellis, or tie them to a support. Virginia creeper and Boston ivy form tendrils that end in little sucker disks. Clematis fashions tendrils; help it out by hooking a leaf stem around a support.

Vines don’t have to be all about gorgeous flowers. Burpee’s horticultural team thinks vegetable vines can be interesting, too. For North Florida, they suggest pole beans, Malabar spinach and cucumbers. Among perennial vines, they like passionflower, lonicera and honeysuckle, and in the annuals category, their choices are morning glory, moonflowers, cypress vine, thunbergia and cup-and-saucer vine.

If you like to spend time outside in the evening, Robin Ruether, product manager at Burpee, says you will do particularly well with moonflower, with its saucer-like, white blooms that light up the night and soften the air with a lemony fragrance. Honeysuckle, too, is an after-dark winner, smelling so sweet it will attract giant moths and other pollinators from blocks away. She also likes the cup-and-saucer vine, a South and Central American native and a vigorous climber with giant white flowers.

“It’s best to plant these climbers in early spring before there is too much heat, or in the fall,” she said. “They need a well-draining soil that is loose with a lot of organic matter such as compost mixed in. Dig a hole to accommodate the roots. Remove the plant from the pot and place the top of the root ball even with the level of the surrounding soil. Fill with soil to the top of the root, pat down the soil firmly and give the plant a good drink.”

Fences are natural supports for vines, and the most attractive way to cover an ugly chain link fence is with flowering climbers. Wood trellises are also good supports and are easy to install. Landscape designers discourage homeowners from installing trellises up against house walls since so many climbers tend to get out of hand. Instead, add the trellises to flower beds where they will provide dimensional contrast. Finally, think of adding a vine-covered arbor to your yard. It’ll quickly become your favorite romantic tea house or dinner spot.