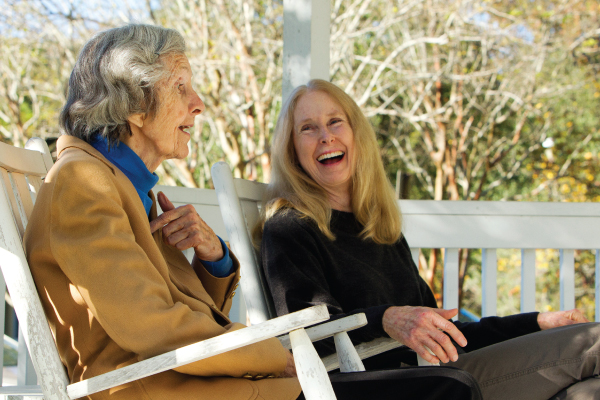 Services and support from Alzheimer’s Project have helped Tricia Culbertson deal with the challenges of being a caregiver for her mother, Molly Murray.

Tricia Culbertson has a full-time job, but she has no salary, no “coworkers” and no benefits, other than the satisfaction of knowing her aging parents are well cared for. She is a caregiver, and Culbertson would have become increasingly isolated if it hadn’t been for one Tallahassee-based nonprofit: Alzheimer’s Project Inc.

“I’ve been unable to return to work since 2004 and have lost all my professional contacts,” she said. “I sort of fell into a world where I knew nothing about what I was doing … through Alzheimer’s Project, I was invited to participate in a number of events — educational and support groups. I made friends among those groups.”

Alzheimer’s Project Inc. (alzheimersproject.org) has been caring for caregivers in Tallahassee since 1991. The brainchild of St. Paul’s United Methodist Church’s then-pastor Rev. John Fletcher, the nonprofit started as a small outreach, housed at the church, supporting those caring for elderly relatives with Alzheimer’s or related dementia.

More than 20 years later, Alzheimer’s Project is still based at St. Paul’s here in Tallahassee, but has expanded to serve local caregivers in 12 counties of the Big Bend. “We provide respite care, support groups, in-home care and educational resources to current and former caregivers,” said Bill Wertman, CEO and director of Alzheimer’s Project. “And all of our services are completely free to anyone who needs them.” And despite the name, the nonprofit is not limited to serving caregivers of those with Alzheimer’s; they also provide services to families caring for people of all ages with disorders such as autism and Down Syndrome.

What is Alzheimer’s Disease?

A new individual is diagnosed with Alzheimer’s disease every 69 seconds, and it affects 5.4 million people in the United States alone. For those with the disease, a diagnosis of Alzheimer’s can mean from two to 20 years of decline. Alzheimer’s disease is now the fifth leading cause of death in America for those over 65.
Wertman, who also teaches in the social work departments at both Florida State and Thomas universities, is quick to point out that “forgetfulness due to aging or increased stress is not dementia or Alzheimer’s disease. ‘Dementia’ is an encompassing term to define the loss of cognitive functions such as thinking, remembering and reasoning of sufficient severity to interfere with a person’s daily functioning.”

Dementia, he explains, is not a disease in itself, but a group of symptoms. When a person has dementia, he/she will lose the ability to think, reason and remember and will inevitably need assistance with activities of daily living such as dressing and bathing. Changes in personality and mood also are symptoms of dementia. Very few dementias are treatable or reversible, and Alzheimer’s disease is the most common form of untreatable, irreversible dementia.

The stress on a caregiver — often the child or spouse of the person with dementia — can take its toll. Lynda Hartnig cared for her father with Alzheimer’s disease until he passed away in 2011. “You know the person you love is there,” she said, “but they’re slipping away. There are other diseases where you have hope, and with this disease there is no hope [of a cure]. They can’t even let you know what they want anymore.”

Respite: Rest for the Weary

Caring for someone with Alzheimer’s or related dementia can take both a physical and psychological toll on the caregiver. Because of that stress, respite care is the primary outreach of Alzheimer’s Project. “The idea behind respite care is to give those caregivers a break,” said Wertman. “A few hours to go grocery shopping, get their hair cut or just take a nap.”

A respite day is designed to be engaging and interactive for the client. From 9 a.m. until 3 p.m., they are under the care of experienced staff with a ratio of two clients to each staff member or trained volunteer. The day begins with play therapy, which might be a game like Bingo; followed by music therapy, a nice lunch and pet and/or art therapy. Occasionally, they also offer a seated yoga instructor and a monthly sing-along with children from Cornerstone Learning.

All therapy is administered by certified therapists, and thanks to strong relationships with organizations like Tallahassee Memorial Hospital and FSU, specialists in communication disorders, translators for non-English speakers and qualified healthcare professionals are always available.

“Sometimes, we also engage in some aromatherapy through cooking projects,” Wertman explained. “You want to see someone suddenly remember a familiar scent that brings a quick smile to their face? Bake some chocolate chip cookies!”

Respite is offered on a weekly basis on-site and can also be provided in home by a trained volunteer. “The faith community has been invaluable in providing this service,” said Wertman. “Across denominations and faiths, these organizations have all stepped up to make this possible.” In Tallahassee alone, respite rooms are offered weekly at Temple Israel, St. Paul’s United Methodist Church and Killearn United Methodist.

Demand for respite care is growing. Wertman explained that each of the Tallahassee respite locations are operating at maximum capacity (18-20 clients) and Alzheimer’s Project would love to expand the service to locations on the south and west sides of Tallahassee. In addition, he receives a stream of requests from rural areas to open day-respite programs in some of the outlying counties: “In some of those counties, we’re the only service to which caregivers have access.”

In addition to respite care, Alzheimer’s Project provides services such as support groups and educational resources like training for caregivers. One of the most valuable support services they fund is the Project Lifesaver program, a reliable and proactive rescue program for persons with Alzheimer’s disease, related memory disorders, Down Syndrome and autism.

Electronic bracelets allow law enforcement officers to quickly locate a person who has wandered and safely return them home. “We have volunteers who work exclusively with this program,” said Wertman. “They meet with the family once per month, change the batteries in the bracelet and enter notes about the battery change in an online database.”

Ron Davis, who serves on the board of directors of Alzheimer’s Project, cares for his father, Rosser Davis, who has been diagnosed with mid-stage dementia.

“Alzheimer’s Project provides this monitoring device for Dad, which gives my wife and me the confidence that, if Dad wanders again when we’re traveling, we can easily and safely get him back home.”

Alzheimer’s Project is committed to keeping all services free to caregivers, so fundraising is an ongoing mission. To provide a year of weekly respite care in one location costs Alzheimer’s Project $12,000. The nonprofit operates with an overhead of approximately 24 percent, said Wertman, “Because what we provide is actually human service, the direct human touch.”

Besides Wertman, there are five other staff members at Alzheimer’s Project, including a clinical director, two respite room coordinators, a volunteer manager and Office Manager Karen James. In addition, there are 147 volunteers across the 12 counties, including 65 volunteers devoted specifically to Leon County.

“One message that we would love to communicate to potential donors in the area is that local funds stay local to help local people,” said Wertman. “When you consider how many people are diagnosed with Alzheimer’s and related memory issues every day, chances are you know a caregiver — whether you know it or not.”

The annual Leading the Way Gala, scheduled for April 19, is one of the major fundraising events for Alzheimer’s Project. Approximately 300 attendees enjoy an enormous silent auction, dinner, award ceremony and live music with all funds directly benefiting Alzheimer’s Project Inc. Other events include a November Walk and the annual Parrothead Phrenzy, usually held in June or August.

For the past eight years, the local Tallahassee Parrothead Club has hosted the Phrenzy and donated all proceeds to Alzheimer’s Project. Ticket sales allow Jimmy Buffet fans to dance the night away for a good cause. “It was the brainchild of my mentor, Penny Weimer,” said Wertman. “And this year they raised a record-breaking $6,500!”
In addition to organized events, Wertman said he’s been humbled by the individuals and groups that walk in off the street and hand over checks to Alzheimer’s Project. The Tally Ho Bridge and Canasta club recently presented them with a check for $1,000 while a separate group organized by Padmini Lakshmin raised more than $1,500 for the agency. From the Holy Mother of God Greek Orthodox Church to the local NARFE (National Active and Retired Federal Employees) group, supporters of Alzheimer’s Project are as diverse as the community of Tallahassee itself.

One of Alzheimer’s Project’s greatest challenges, said Wertman, is letting people who need help know the agency exists for them as caregivers and what the organization provides locally through social outreach. “Too often caregivers get isolated and have so much on their plates that they don’t know where to turn or who to reach out to,” he said. He encourages anyone who knows a caregiver to share the message about the free support services provided by Alzheimer’s Project.

Tricia Culbertson is a fan; she now has a network of friends who understand her challenges, and they support one another. “The work [Alzheimer’s Project] does outside their walls is just as phenomenal as [respite care],” she said. “I had to sell my parents’ house to pay for my mother’s care. My friend from Alzheimer’s Project painted my mother’s house and has spent over 100 hours getting it in shape for sale.” She’s thoughtful as she goes on: “It’s very nice to find a group that says, ‘I’ll help you,’ and they mean it. You don’t find that everywhere.” Skyler Matchett contributed to this story.