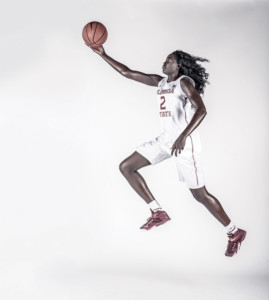 Last season, center Adut Bulgak was Florida State’s breakout player. Voted MVP, the 6’4” sociology major is as much a scholar as she is an athlete. A master linguist, Bulgak is fluent in English, Arabic and Dinka — a popular dialect in her native South Sudan. After immigrating to Canada with her family in 1998, Bulgak’s collegiate career didn’t land her with the Seminoles until her junior year. In the midst of her final season with the ’Noles now, Bulgak is a fan favorite.