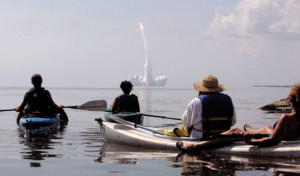 Wallheiser had a unique perspective on the launch of the space shuttle Discovery on July 26, 2005. It was the only time he ever photographed a shuttle launch, which resulted in two pictures he sent to Reuters news service. “I never could decide which I liked better,” he says. “This picture is me transmitting to Singapore — that’s where Reuters circulated out of — from a kayak during the shuttle launch. I am sending pictures on my cellphone, which is probably laying in my lap.”