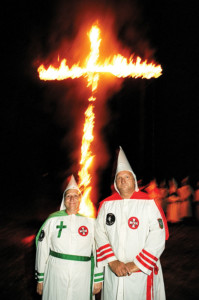 The Klan was recruiting in 1990, starting with a daytime rally in Tallahassee. Later in the evening, the group would travel to a secluded area in Gadsden County for a cross burning. “As dark fell, I’ve got a picture of them putting the kerosene on the torches. Then they light the cross — and it’s so engulfed you can’t tell it’s a cross — and doing more of their thing. Then, when the cross is over and done I go up to the Grand Wizard — this is the grand pooh-bah, the big cheese — and say, ‘Hey I’d like to get a picture of you.’ They stood there and let me take pictures.”